In Angular, a component is the main building block the application, it is very important for us to understand the lifecycle processing steps of the components so that we can implement that in our applications. 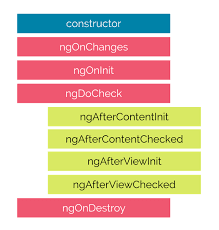 These stages are mainly divided into two phases:

Setting up Windows 10/11 as a developer environment (for beginners)

Python: The Difference Between Sets, Lists, Dictionaries and Tuples

Dev-Coder
Inspire to learn and share the knowledge. Never Giveup on the things which you want to do it for your own.
JavaScript Arrow Functions
#codenewbie #beginners #javascript #devjournal

Once suspended, dev_coder will not be able to comment or publish posts until their suspension is removed.

Once unsuspended, dev_coder will be able to comment and publish posts again.

Once unpublished, all posts by dev_coder will become hidden and only accessible to themselves.

If dev_coder is not suspended, they can still re-publish their posts from their dashboard.

Once unpublished, this post will become invisible to the public and only accessible to Dev-Coder.

Thanks for keeping DEV Community 👩‍💻👨‍💻 safe. Here is what you can do to flag dev_coder:

Unflagging dev_coder will restore default visibility to their posts.