Let's start with the first Pixi-CRS Pipeline in the Cloud, namely on AWS: https://aws.amazon.com/console/.

This is the second blog post in the "Pixi-CRS goes to the Cloud" series. The intro blog post of this series can be found here.

This is how Pixi-CRS looks on Amazon Web Services: 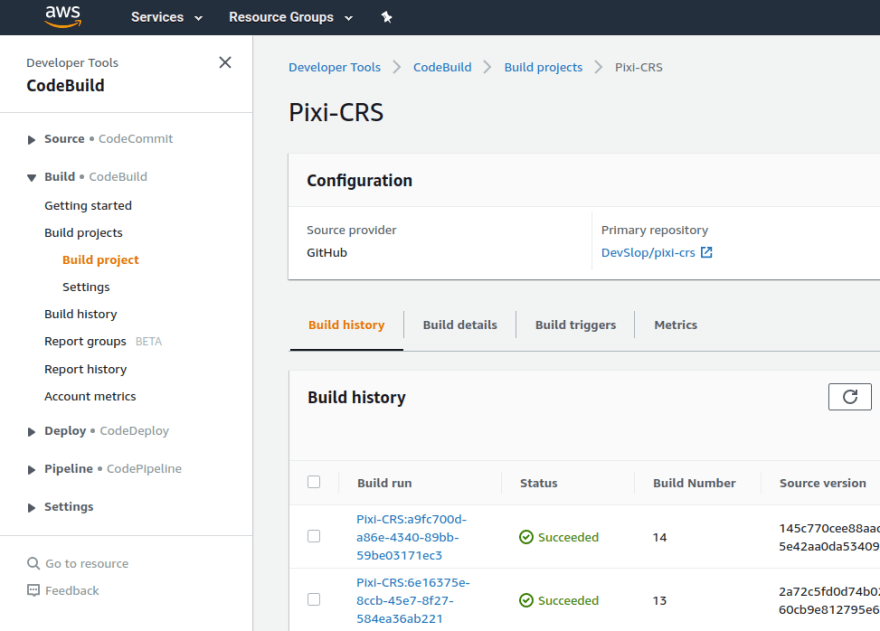 In the image above, we see that the Pixi-CRS CI Pipeline on AWS was added as Developer Tools > CodeBuild > Build project.

The code behind the pipeline can be found here.
AWS pipeline code is written in buildspec.yml files in the root directory of the repository. It's pretty easy to create a new build project inside AWS. We just need to provide a "Project Name", a source repository, choose the option "Use a buildspec file" and enable logs.

Let's have a closer look at this buildspec.yml.

I will explain the different steps below. But I also give explanations in the comments in the provided yaml file.

If you want to read a full description of the CircleCI Pixi-CRS pipeline, you should have a look at this blog post.

Docker-compose is already available in the base image we use. However, we use a newer version of docker-compose because we want to use the argument --env-file.

Start Pixi and the CRS

Now that the CRS and Pixi are running, we perform the Testcafe tests. First, we test Pixi directly, then we test Pixi through the CRS. We also test the CRS itself with a malicious string. We want to be sure that the WAF will block it.

And this is how the Testcafe test output looks: 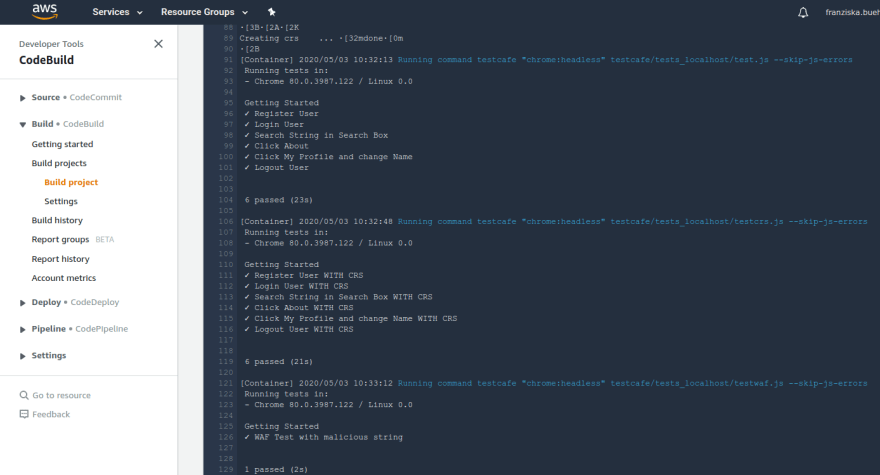 In the end, we check the results. We take a look at the ModSecurity log inside the CRS Docker container.
This is the important step that ensures that we did not get any false positives with our legitimate tests.
In addition, we ensure that our malicious test was logged.

Because Pixi-CRS is a CI pipeline and we want to run our CodeBuild project after every push into the repository, we need to configure a trigger on push events.
This can be done in: Developer Tools > CodeBuild > Build projects > Pixi-CRS > Edit Source > Webhook. I want to trigger a build every time a code change is pushed to the Pixi-CRS GitHub repository.
I also see this webhook in GitHub then.

I didn't configure an AWS CodeDeploy or an AWS CodePipeline. These would be the next steps to deploy Pixi-CRS somewhere and also have Continuous Deployment. In this blog post, I only wanted to show the CI part. And I'm also aware that a lot more AWS options are available. But for this blog post, I wanted to keep it simple and concentrate on the Pixi-CRS CI part.

In the next blog post, we will get to know the Pixi-CRS pipeline on the Azure DevOps Pipeline.