The fourth pipeline I implemented Pixi-CRS in was GitHub Actions (GHA): https://github.com/features/actions.

This is the fifth blog post in the "Pixi-CRS goes to the Cloud" series.

This is how Pixi-CRS looks on GitHub Actions: 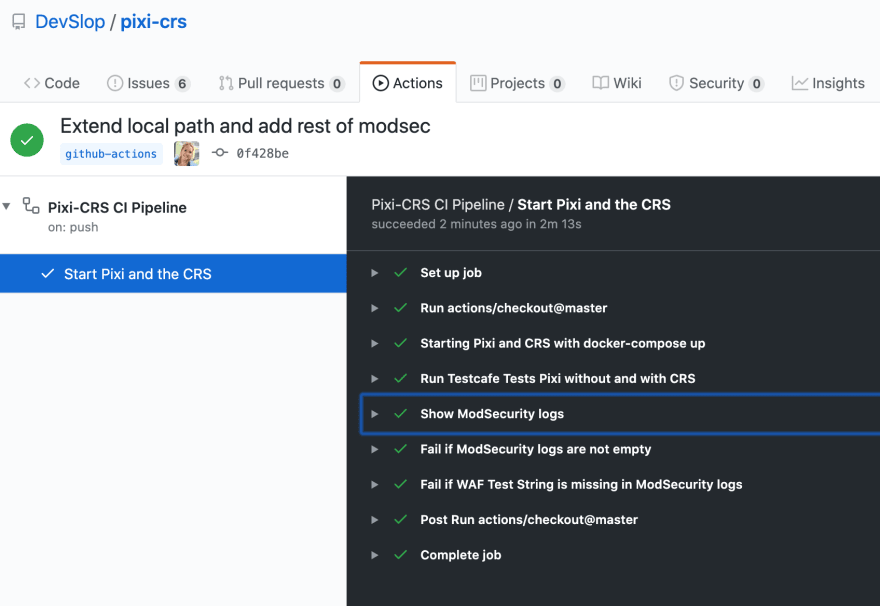 GitHub Actions is not a cloud provider like I described in the earlier blog posts in this series. GitHub Actions is "only" a CI / CD pipeline, but very easy to configure and therefore very lightweight. I like that!
The code behind the pipeline can be found here.
GitHub Actions are written in yaml files inside the ./github/workflows subdirectory of the repository. It's pretty easy to get started with GitHub Actions. No need to configure anything. Adding a yaml file in the named directory is enough and the Actions can be run.

Let's have a closer look at our ./github/workflows/pixi-crs-ci.yml file.

I will explain the different steps below. But I also give explanations in the comments in the provided yaml file.

Start Pixi and the CRS

We start Pixi and the CRS with one docker-compose up command and provide an --env-file. We don't need to install Docker or docker-compose, since it's already there.

Now that the CRS and Pixi are running, we perform the Testcafe tests. This time we can run the tests with the testcafe/testcafe Docker container. The tests can be mounted easily into this container.
Again, first, we test Pixi directly, then we test Pixi through the CRS. We also test the CRS itself with a malicious string. We want to ensure that the WAF blocks it.

And this is how the Testcafe test output looks: 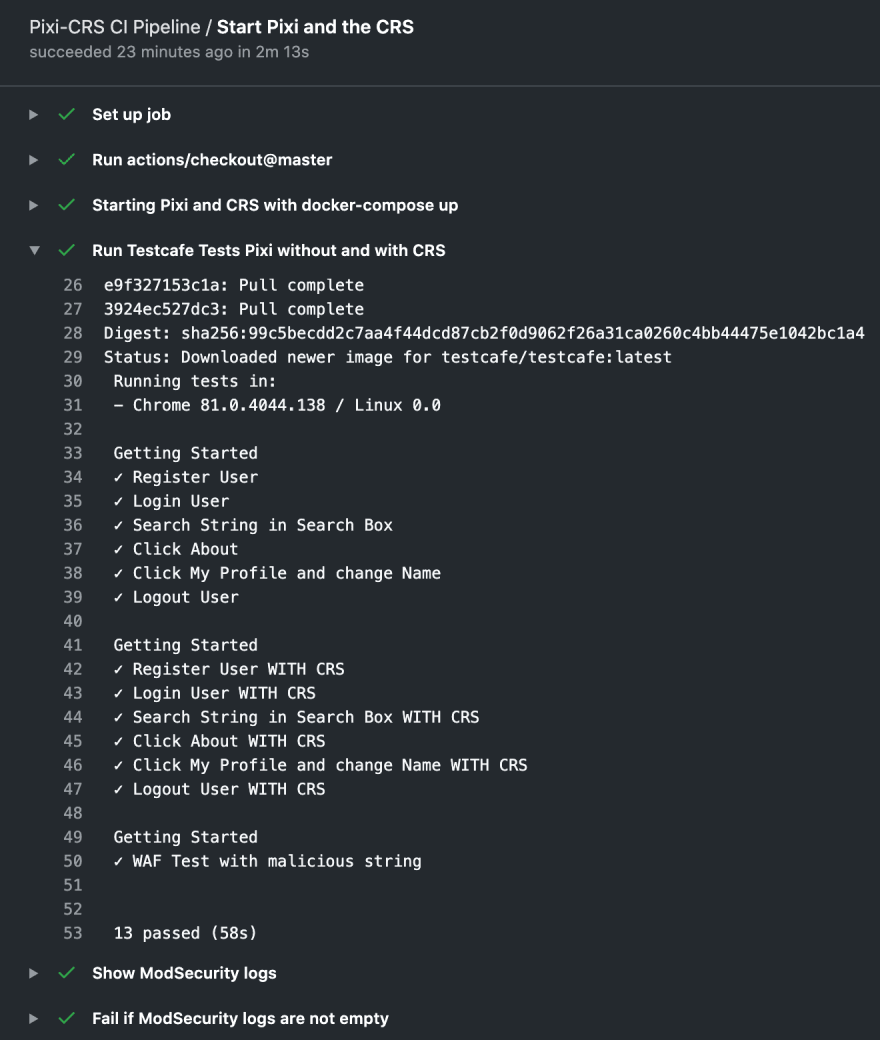 In the end, we check the results. We take a look at the ModSecurity log inside the CRS Docker container.
This is an important step that ensures that we did not have any false positives with our legitimate tests. In addition, we ensure that our malicious test was logged.

Because Pixi-CRS is a CI pipeline and we want to run our GitHub Actions after every push and pull request, we need to configure a trigger.
I added this in our ./github/workflows/pixi-crs-ci.yml file by adding the following lines:

Pixi-CRS is a CI Pipeline and I did not configure the CD part.
In this blog, post I only wanted to show the CI part.

In the next and final blog post of this series I will sum up and compare all five available Pixi-CRS pipelines on CircleCI, Amazon Web Services, Azure DevOps, Google Cloud Platform and GitHub Actions.

What is your win today?

Once suspended, devslop will not be able to comment or publish posts until their suspension is removed.

Once unsuspended, devslop will be able to comment and publish posts again.

Once unpublished, all posts by devslop will become hidden and only accessible to themselves.

If devslop is not suspended, they can still re-publish their posts from their dashboard.