Using the right automation testing tools is incredibly beneficial to your software testing efforts and delivery success. Right set of tools will have a greater impact on the efforts we put on development & maintenance of automation frameworks. Here is the list of tools that I found and currently using for UI Automation, API Automation and Performance testing. There are other great tools out there in the market but this article doesn't include or compare with them as this list is purely opinionated.

Cypress is a powerful testing tool that needs no introduction if you have been developing frontend apps recently. The cypress home page starts with the coolest testing quote:

With its features, cypress truly stands for what it says. 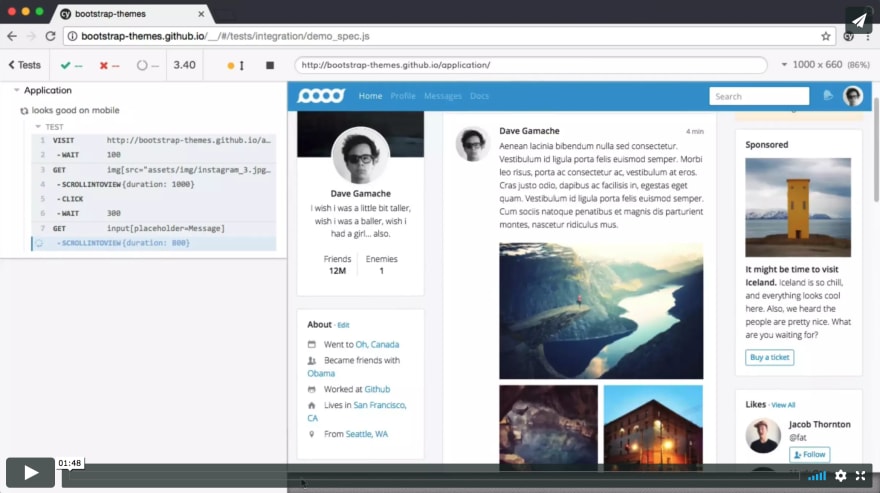 Install Cypress for Mac, Linux, or Windows, then get started.

Let the world know your project is using Cypress.io to test with this cool badge

Cypress makes tests easier as it is interactive and runs alongside your application. This means that the Cypress test runner has full access to your code, and doesn’t run externally like Selenium frameworks do.

Our application is powered by numerous micro-services that are communicating with each other through an API interface. Having automated API testing became paramount for us as they represent the entire application logic. Following the traditional approaches to test the API's will no longer work. We need the next-gen tool that aligns with the world of micro-services. After a lot of exploration, we decided to go with PactumJS. Considering its features, I believe it is the most underrated open source testing tool available in the market.

This readme offers an basic introduction to the library. Head over to the full documentation at https://pactumjs.github.io

pactum can be used for all levels…

As most of out tech stack was in Node.js, it was simple for developers to contribute to API testing. Instead of having unit tests, developers started writing component tests for their services.

For performance testing we want a tool that is scriptable, version controlled and easy for users to adapt. As all our services communicate over HTTP, we don't need a tool that supports wide range of protocols. Keeping that in mind, we came across k6. It is a developer-centric, free and open-source load testing tool built for making performance testing a productive and enjoyable experience.

A modern load testing tool for developers and testers in the DevOps era.

k6 is a modern load testing tool, building on our years of experience in the load and performance testing industry. It provides a clean, approachable scripting API, local and cloud execution, and flexible configuration.

This is how load testing should look in the 21st century.

Both our UI and API Automation testing tools are in JavaScript. With k6, all our testing needs are met by a single programming language.

Cypress, PactumJS & k6 are the open-source automation testing tools that we have considered as the top 3 for year 2022.

DHEEYANKA PRIYA BOMMISETTY
Compress and serve big JSON dataset files in JavaScript like never before
#javascript #webdev #react #database
Defect life cycle in API testing ⚙️
#beginners #api #codenewbie #productivity
How do you motivate yourself to write when so few are reading it?
#discuss #watercooler #meta

Once suspended, dheeyankapriya will not be able to comment or publish posts until their suspension is removed.

Once unsuspended, dheeyankapriya will be able to comment and publish posts again.

Once unpublished, all posts by dheeyankapriya will become hidden and only accessible to themselves.

If dheeyankapriya is not suspended, they can still re-publish their posts from their dashboard.

Once unpublished, this post will become invisible to the public and only accessible to DHEEYANKA PRIYA BOMMISETTY.

Thanks for keeping DEV Community 👩‍💻👨‍💻 safe. Here is what you can do to flag dheeyankapriya:

Unflagging dheeyankapriya will restore default visibility to their posts.