Goibibo is one of the top Online Travel Agent companies for booking tickets Online for Flights, Trains, Hotels, Buses and Cars in India. In this I am gonna take you through the problems that we had with existing implementation of goibibo trains and how we resolved it. Basically the journey of re-building goibibo trains vertical from scratch.

Our Trains Funnel has 3 Main Pages:

Although our API provided a lot of information, they were not consumed at the Client. Due to this there was no parity in features between Mobile apps and Web Apps which led to much plain UI with no option event to filter items for example.

For someone who came into redux-saga from redux for global state management, it was still hard to wrap my head around the concept of how redux-saga's generators work and how internally they are coupled with watchers. Every time I touch the code on saga I had to be extra careful also it uses local storage to maintain store.

Our Review page's URL is static (/trains/booking) which makes it impossible to share it across to someone else on the web. Because it was built with (Android/IOS) APP first approach.

Sometimes users were not sure about what the mandatory Info they were missing to proceed further because of lack of appropriate messages.

So the Elephant in the room was the JS bundle Size. Our vertical was a Single Page Application and as you know we ended up downloading all javascript content up front on page 1 for the rest of the two pages as well. So the Initial sizes were as below:

This resulted in a considerable amount of users dropping off from our funnel without getting the javascript downloaded.

Steps taken to resolve all the issues listed above:

Since a lot of Information are already available in the API and just not Integrated, we went ahead with providing Feature Parity to the Existing Dweb of trains with (Offers Carousel, Filters, Best Available Class, Alternate Train Route, Smart Engage, Offers).With this our Average daily booking jumped from 200-300 to 600-700 on a daily basis.

We had to get React out of the picture because just to show a hello World we'll end up sending around 40KB to the Client.

Maintaining an e-commerce website in plain JS has its own Pain Points with everyone coding in their own way (functional, object oriented, Es6) which ends up having no uniform way of writing the code. Also updating the DOM won't be as optimised as compared to frameworks like (react).

We were right on the current trends and noticed about Svelte and its ability to send compiled code as output. So, we ended up doing a POC on Svelte for our Search component in Home page and we found that the total amount of code that is shipped to the client is less than 10KB for the Search Widget which in turn is 45+KB in react.

preact[3KB] is a lightweight react as they call it and it also has support for Hooks with preactX release. So a POC that ended up with size a little higher(2KB) than Svelte.

Since 'Preact' and 'Svelte' were so close to our requirement of achieving lightest client bundle, we decided to choose between these two frameworks.

Note: These were the data at the Time of deciding framework

With all those comparisons we decided on going with 'preact' as it is not much of size difference when compared with svelte and the community and packages availability are too good.

Our key metric was to serve the entire Funnel in Under 100KB.(All 3 pages included)

We decided on following the Multi Page Application Approach as the extra byte of code to download on each page transition could go to a maximum of only 20KB.The other resources which are common like vendor.js are served from service workers for each page except for the first time.

Like any other vertical in goibibo, trains will be Server Side Rendered for providing the User with Meaningful First Paint as well as helping in SEO Indexing.

The content will be Server Side Rendered with the same page being used in the funnel as well as for the SEO pages.(This ensures feature parity and avoids multiple team handling multiple versions of the same page).

Do not add packages unless it is absolutely needed. Always prefer native solution.

We decided on leveraging the built-in useReducer hook combined with useContext to serve as global State management for our Application.And this helps us reducing the need for yet another third part library like redux.

We have decided on not using Axios as it contributes to (4.4KB gzip) and to use fetch instead. However we used node-fetch for fetching on the server.

Our client had only the following content in our vendor. 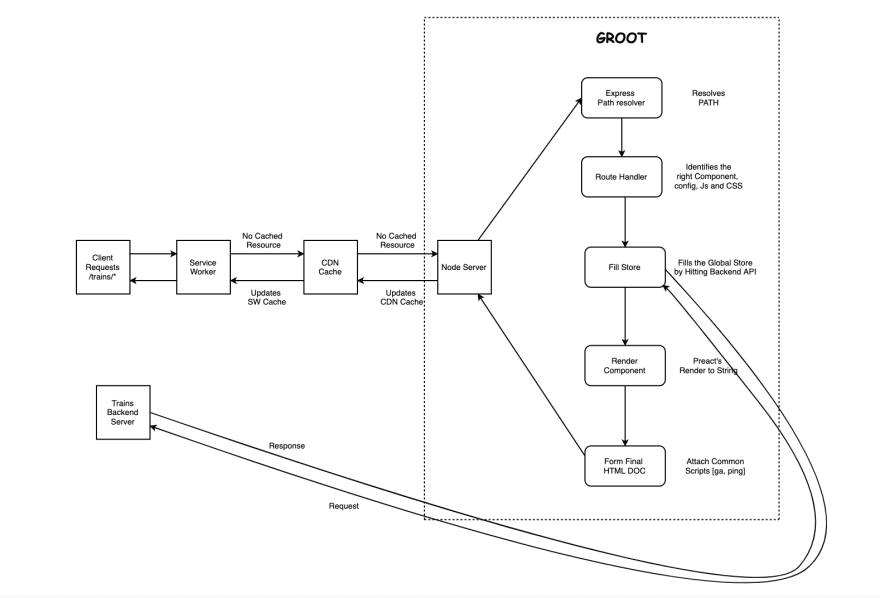 Getting our First Page out:

We got our designs and implemented the functionality.When it was time to take the release out we noticed that our CSS for that page is about 26KB because we used a generic css file known as combinedStyles.css which has a lot of CSS rules that are shared between all verticals but most of them were not used in our particular page.

This library creates a new file which contains css rules only for those classes that are used in our code base.

So I created a new webpack plugin out of purify Css.

This worked out ultimately and resulted in reducing the size of the combinedStyles.css from 23KB to ~7KB.

Finally, with the success in that we also involved in serving the content in brotli compression rather than gzip which also helped us in reducing the resource size. We did have our Fallback to gzip for the user agents that do not support br compression.

Forgot Password is the first page that we built and is live with a pretty good LightHouse Score of 91. 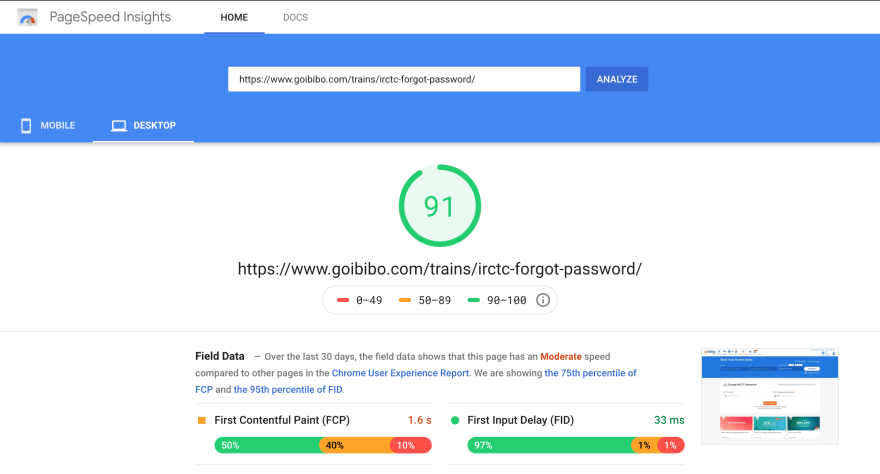 Post that we released multiple URLs which are relatively New.

As the results were Satisfactory for the pages outside the main funnel, we moved one of the pages inside our funnel to be served from groot.

Review page is the first in the funnel page we decided to rewrite in groot.

Since we wanted to provide the Server rendered Meaningful response on review landing rather than a loading shimmer,

And we were able to see considerable improvement in terms of performance.

People who saw our Server Rendered First Paint but could not get the JS loading.

In our Old Page for Every 100 users almost 8 of them could not get the JS loaded due to which our page appears non-interactive to them.
The same got down by 5 percent to 3 for 100 in our New page. Which again is more than 50% reduction in our Page Dropoffs.

Since Common assets are cached by service worker, moving from one page to the other will download only the page specific js file from the server.

Sincere thanks to @Raghunandan for helping me with his brilliant ideas and providing me with different perspectives to solve the problem. Thanks to @Abhigyaa for the Axios to fetch Migration

Detecting dark mode on every request 🌓

Once suspended, dhilipkmr will not be able to comment or publish posts until their suspension is removed.

Once unsuspended, dhilipkmr will be able to comment and publish posts again.

Once unpublished, all posts by dhilipkmr will become hidden and only accessible to themselves.

If dhilipkmr is not suspended, they can still re-publish their posts from their dashboard.

Once unpublished, this post will become invisible to the public and only accessible to Dhilip kumar.

Thanks for keeping DEV Community safe. Here is what you can do to flag dhilipkmr:

Unflagging dhilipkmr will restore default visibility to their posts.