Coding a Django website is pretty simple, but deploying it online could be a tedious & a complicated task for beginners(including me). Hence here is a complete guide on how to host your Django site for free on Qovery

I will be taking my TriviaQuiz Django Site for reference.

Here is my initial repository that was working perfectly on my local machine:
https://gitlab.com/rachitkhurana40/trivia-quiz-initial

Setting up the Webserver

Qovery basically hosts your application through a docker container and need a webserver to run on. So we can use gunicorn. Its a pretty simple python webserver.
You just need to install it using pip & add it to your requirements.txt file

Django automatically generates a wsgi.py file that is required by gunicorn to run the server.
Now the startup command will be

For mine it will be

Qovery hosts your application through a docker container. So the next thing we need to do is make a Dockerfile

A Dockerfile is just a text document with all the commands required to build your application in a docker container.

You can you my Dockerfile for the same. most probably it will work with your Django Project too.

For my project it is

Note: Dockerfile is doesn't have an extension

Serving static files for the website is important. Otherwise most of your static assets (like css , js files) won't be shown on the site.

For serving static files we will use whitenoise

You can install it using pip and also add it to your requirements.txt.

Just add this to your settings.py:

The next thing we need to do is change the database from sqlite to Either postgres or Mysql on Qovery.

You might be wondering why should we do that? The simple answer is the sqlite database resets everytime you deploy your site.
Since sqlite is just a file, it gets overwritten everytime you make even a small change in your code & deploy it.

Hence we will be using Postgres database from Qovery. 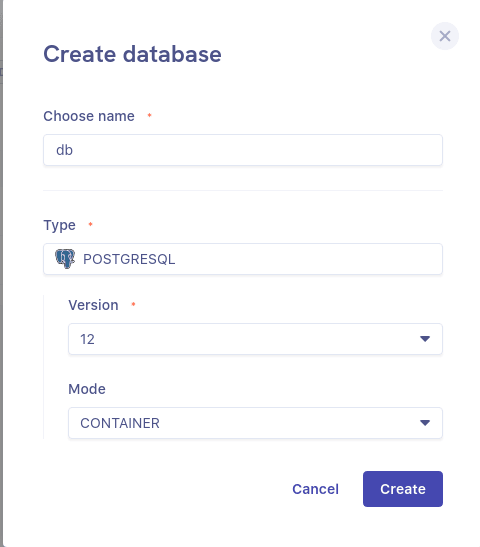 After creating, go to its actions and deploy it.
After deploying it, I would recommend you to restart it , it gets optimised by doing that.

Next we need to use this database in our Django app.
For that we need to make some changes in settings.py file.

By default Django uses sqlite database & has the following code in settings.py file

But we will be using Postgres for our app. Hence will need to install psycopg2 & also add it to the requirements.txt file.

After that we need to change the database config in settings.py file to

All the things with <> needs to be modified.
can be found in your qovery's Environment variables and would be something like QOVERY_POSTGRESQL_XXXXXXXXX_DEFAULT_DATABASE_NAME

For , go to your database application in Qovery and then click on Host. It will automatically copy the host url.

After that you need to go to your database application in Qovery. & then click on show config. And copy your master password.
Now come back to your application project on Qovery, and make a new environment variable.
Its name should be PASS and value should be the password that you copied.

After replacing all <> with the values, you can push your git code and Qovery will start to deploy your Django applications. And then your website will be up in a few minutes.

And next thing you might need to do is make a superuser. For that you should use your local machine instead.
So you can navigate to your directory in which the project is. Otherwise clone your repository and navigate to that
For that you need to create a .env file.
Note: It should be .env file and not .env.txt

The .env file should contain the following:

Here you should replace QOVERY_POSTGRESQL_XXXXXXXXX_DEFAULT_DATABASE_NAME etc with the variable names as described a little above, under Database.

And also replace with the database password and with the host url.

Now you can open this directory in your terminal/CMD .
and then you can run the command

either in a virtual environment or directly (as per your preference).

After that you can access everything from your Django's admin panel.

Here is the final repository:
https://github.com/rachit1601/triviaquiz

Here is my site deployed on Qovery:
https://triviaquiz.redcrypt.xyz/

If you have any other problems, you can write in the comments or you can contact me on Discord at DiluteWater#3149

How to Richly Preprocess your IPFS NFT Images and Metadata

Once suspended, dilutewater will not be able to comment or publish posts until their suspension is removed.

Once unsuspended, dilutewater will be able to comment and publish posts again.

Once unpublished, all posts by dilutewater will become hidden and only accessible to themselves.

If dilutewater is not suspended, they can still re-publish their posts from their dashboard.

Once unpublished, this post will become invisible to the public and only accessible to Rachit Khurana.

Thanks for keeping DEV Community 👩‍💻👨‍💻 safe. Here is what you can do to flag dilutewater:

Unflagging dilutewater will restore default visibility to their posts.