Hello all😊👋
This is my first post so bear with me.

In this article, I am going to tell you guys how I was able to automate the testing, building and deployment(on GCP APP ENGINE) of my web app written in React and Spring Boot ( code base on GitHub) using google cloud trigger.

Contents of this Article

Below is the directory structure I am using to fulfil my requirement of testing, building and deploying UI and Server on a GitHub commit.

Below screenshots explains the steps to connect a branch from GitHub to your GCP projects trigger.

c) First, you have to add a new account, once the GitHub account is added then click on Edit repositories on GitHub, which will redirect you to GitHub where it will ask you for repositories to select for which trigger will listen.
d) Once Trigger created you can see the details of the trigger.
Currently below are the configuration of my trigger
* Event: Push to any branch
* Status: Enabled
* Build Configuration: Auto-Detected
You can edit these configurations

Finally, your trigger is connected to your GitHub repo but before we commit anything to this repository we need to understand the configuration file required to test, build and deploy our app to APP Engine.

After this, we will create the app.yaml file UI folder as shown below, But remember that package.json, start scripts should be node app.js where app.js is having server-side code for serving static files.

5) Serving frontend and backend from two different services on the same domain.

To let Google’s load balancer decide what microservice needs to handle what request, you can define a dispatch.yaml file to overwrite App Engine’s default routing rules. This has to be done after all independent services have started. My dispatch.yaml file looks like this:

Below is the final cloudbuild.yaml file(present in root directory of project) for frontend and backend steps to be executed by trigger

once all services are started you can go to GCP APP ENGINE and see the deployed services and path the dispatch routes like below:

Now you can go ahead and commit to your GitHub repository.

Go to you Cloud build->History and you see can build started.

once build is successfully completed then below is the screenshot you can see. 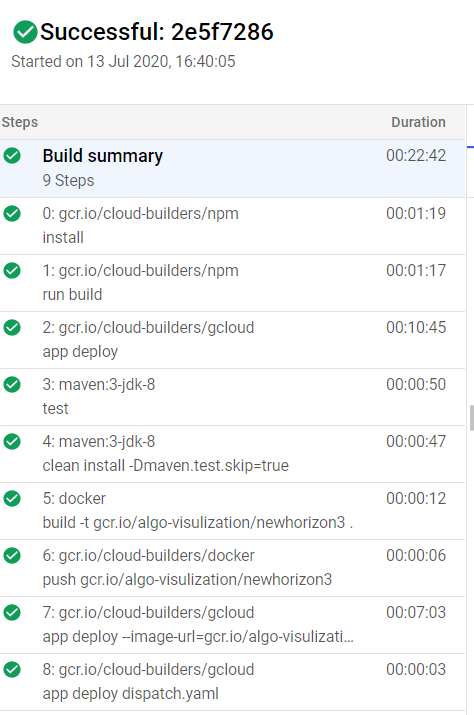 Hurray you have successfully deployed you web-app to google cloud.

If you have come this far reading this article, please provide your valuable comment or feedback so that I can improve next time.

Once suspended, divyanshgothwal will not be able to comment or publish posts until their suspension is removed.

Once unsuspended, divyanshgothwal will be able to comment and publish posts again.

Once unpublished, all posts by divyanshgothwal will become hidden and only accessible to themselves.

If divyanshgothwal is not suspended, they can still re-publish their posts from their dashboard.

Once unpublished, this post will become invisible to the public and only accessible to Divyansh Gothwal.

Thanks for keeping DEV Community 👩‍💻👨‍💻 safe. Here is what you can do to flag divyanshgothwal:

Unflagging divyanshgothwal will restore default visibility to their posts.