I am starting a series talking about my small React applications. To begin, we start with this small application I wrote about 7 months ago. If you just want to see the code, here you go: https://github.com/djamaile/kanji-to-hiragana/

A couple of months ago I was studying Japanese. I was about to graduate (I just did!) and I wanted to celebrate that with a trip to Japan. Unfortunately, that trip got canceled. But we still have this cool program!

Note: There are probably way better resources to explain this so, I suggest hitting up Google if you are more interested in this.

So, I was studying Japanese with Anki. Anki is a software program where we can use flashcards. Sometimes I would get cards with kanji on them and I would have no idea how to pronounce the word. The back of the flashcard would only tell the English translation and not show the full word in hiragana.

Furthermore, knowing the hiragana in the kanji could not only help with pronunciation but also help me better remembering the kanji. So, I wanted to translate the words with kanji in them to hiragana. Well for that I needed an API of some sort. Surprisingly I found one from https://labs.goo.ne.jp/. I can't exactly remember how I found but it did have the required API!

So, I started writing my React application with this simple idea: I want to input kanji and get only hiragana back.

First, I checked if the given input was Japanese and this can be done with simple regex. If the input was not Japanese then an error would show up and alarm the user.

Second, the actual translation from kanji to hiragana. When I was building this I very much into hooks. So, I made a custom hook for the translation. In the hook, we would use the function above to check if the input is Japanese. After the check, I take the input and send a request to the API and store the result. 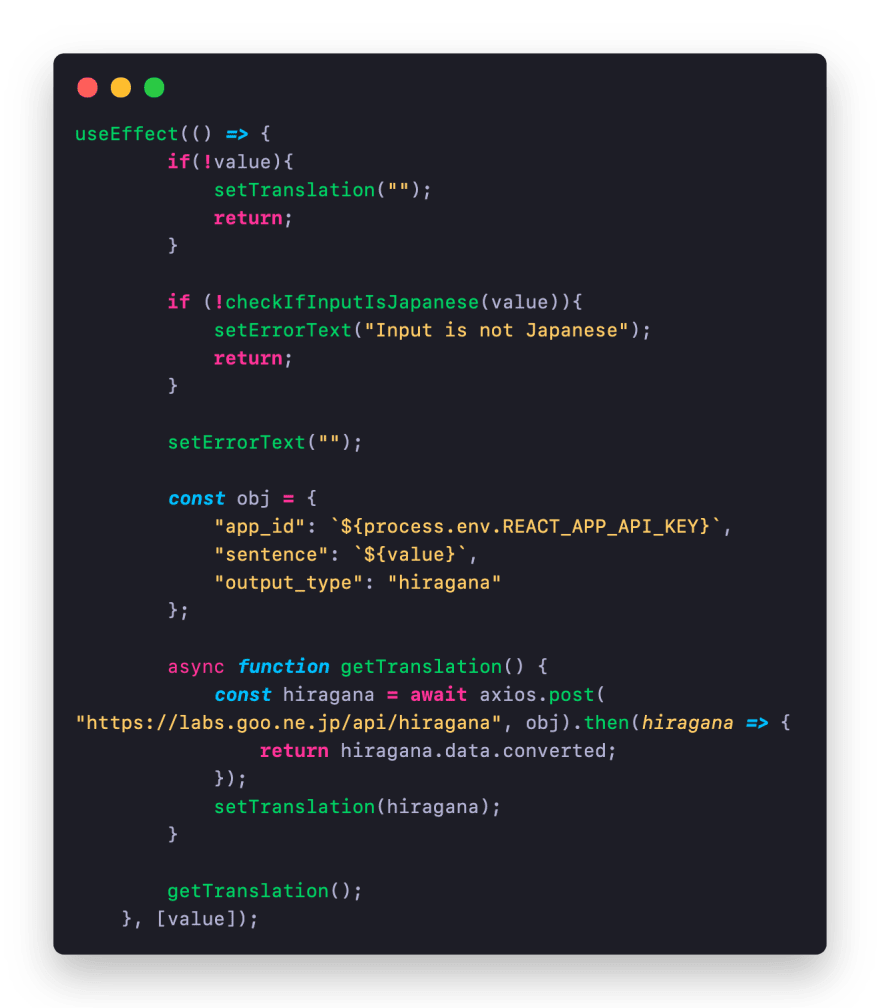 Lastly, I put two text boxes on the homepage and imported the hook. The application was done and it worked! I do have the mention that they are probably caveats, because of how complicated kanji is. But for the time I used it, it worked well!

Well, I stopped using it, because I eventually found better Anki decks. But if someone has an idea or wants to contribute please let me know!

Once suspended, djamaile will not be able to comment or publish posts until their suspension is removed.

Once unsuspended, djamaile will be able to comment and publish posts again.

Once unpublished, all posts by djamaile will become hidden and only accessible to themselves.

If djamaile is not suspended, they can still re-publish their posts from their dashboard.

Once unpublished, this post will become invisible to the public and only accessible to Djamaile.

Thanks for keeping DEV Community 👩‍💻👨‍💻 safe. Here is what you can do to flag djamaile:

Unflagging djamaile will restore default visibility to their posts.