You'll learn best about a specific tool or program by helping users with their problems and questions. I have experienced this when starting with Nagios/Icinga more than 10 years ago. Today I am trying to help the GitLab community and learn myself a lot. Often I just have an idea but never tackled the code or environment myself.

Today I have found a question on the GitLab forums on the first steps with CI/CD. It actually involved building source code for an ARM Cortex hardware architecture:

to build a small cortex-m4 firmware

The question was about a specific build step and make not being found. Also, whether the Docker-in-Docker image build really is the correct way of doing it.

Never did that before for ARM Cortex builds. The question also included a link to the project repository and its .gitlab-ci.yml with all the details there. It also showed the build error right in front of me.

Guess what I did next? Right, the power of open source and collaboration - I forked the repository into my account!

The Docker-in-Docker approach is used to build a new image providing the cortex-m4 hardware specific build tools. Among the container build steps there was one which executed a test.sh script which ran make.

Ok, then let's just see how to install make into the docker:git image. Wait, which OS is that?

The CI build runs fine now, the script does something. But does it really compile the binaries ... it is executed in the outer Alpine Docker container, not inside the newly created build image.

Build the image, then compile inside the image

Then I remembered the two stages for GitLab CI/CD and the container registry:

To better visualize this, let's create two stages as well: 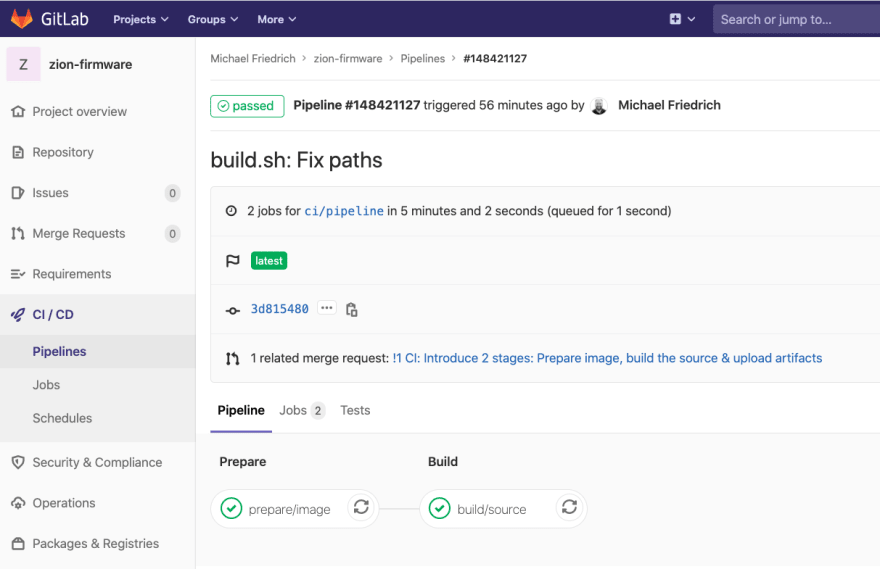 Use the Web IDE for syntax highlighting and direct CI/CD feedback in the upper right corner.

To prepare this environment, define these variables: DOCKER_DRIVER is read by the CI/CD Runner environment in the background, while the IMAGE_TAG allows a shorter variable reference for the GitLab registry URL to the container image.

Build and push the Docker image

The next step is to define the build image. Ensure that the Dockerfile is located in the main repository.

Wait, there was Docker-in-Docker? Yes, the CI/CD runners use the Docker executor, so every job on its own is run inside a container.

The trick here is to virtually share the runner's Docker daemon socket with the job container building the image. This happens in the background, only visible with the settings for image: docker and service: docker:dind.

The reason for creating the Docker image is a different architecture and specific cross compilation requirements for the ARM Cortex architecture. A similar approach is needed when building binaries for Raspberry Pis with using QEMU for example. 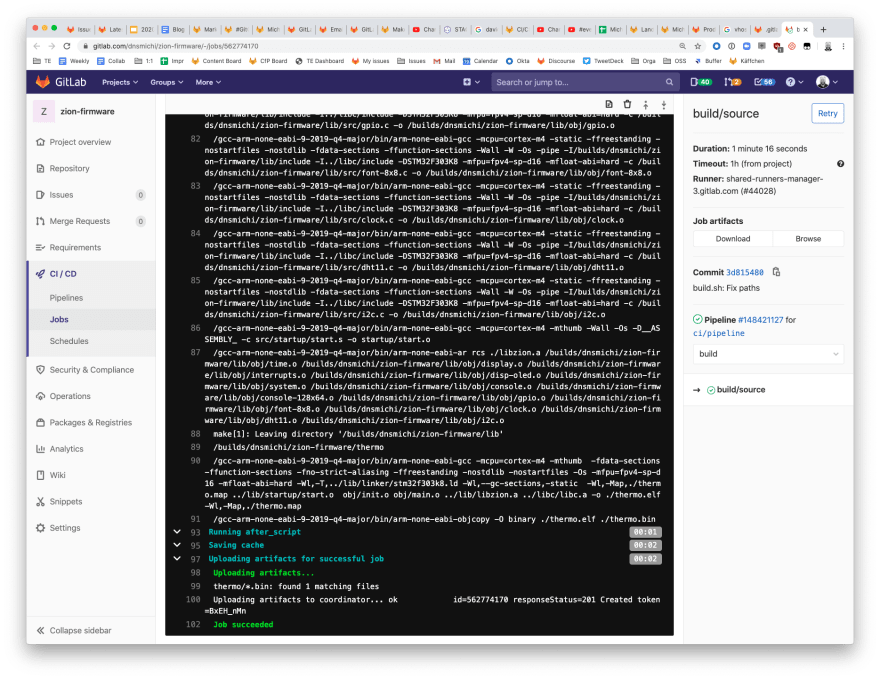 I didn't achieve this in one shot, so don't fear a build to fail and another Git commit to attempt to fix it. The hardest challenge is to understand the code and scripts from someone else, and iteratively learn.

Open source definitely helps as we can collaborate and work on the different challenges. You can see my attempt in this merge request.

More questions on GitLab CI/CD first steps? Hop onto the forum and maybe we'll write another dev.to post from our findings!

Working on Lumberjack v14, the extensible logging library for Angular

Once suspended, dnsmichi will not be able to comment or publish posts until their suspension is removed.

Once unsuspended, dnsmichi will be able to comment and publish posts again.

Once unpublished, all posts by dnsmichi will become hidden and only accessible to themselves.

If dnsmichi is not suspended, they can still re-publish their posts from their dashboard.

Once unpublished, this post will become invisible to the public and only accessible to Michael Friedrich.

Thanks for keeping DEV Community 👩‍💻👨‍💻 safe. Here is what you can do to flag dnsmichi:

Unflagging dnsmichi will restore default visibility to their posts.