Geospatial data can be defined as any dataset which has a location tag attached to it, i.e.: a pair of coordinates which allows us to position it precisely at the surface of the earth. In this post we are going to describe how we can make geospatial data available on the web, trough a RESTfull API, so that ourselves or others can do something with it, for instance creating a map. If it is true you can create a map using a static file, using an API has numerous advantages like scalability, reliability and updatability. In order to do this, we will use three things: a dataset, a standard and a stack of Free and Open Source Software (FOSS).

In this tutorial we will share a dataset with local shops and products in the city of Barcelona, kindly provided by sawcer. 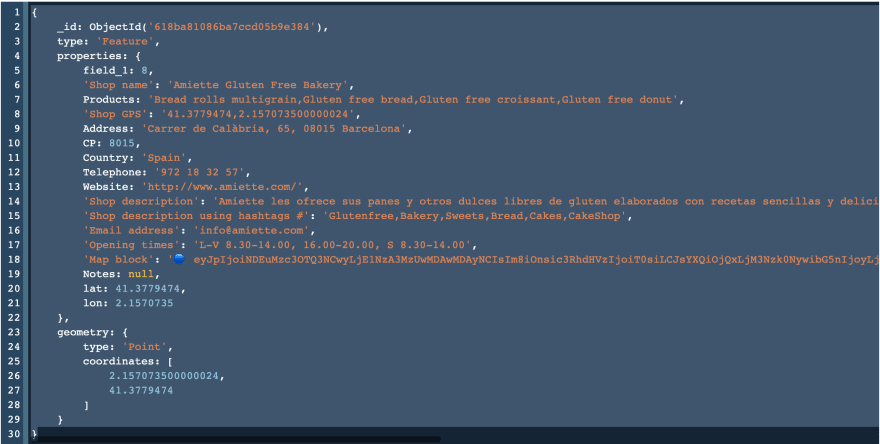 Each record describes characteristics of the shop such as name, address, website, which products are sold (e.g.: Gluten free donut) and, last but not the least, its location as a point geometry, with x,y coordinates.

Standards are the glue in the server-client architecture. The Open Geospatial Consortium(OGC) is a member organisation, which publishes standards to ensure the maximum degree of interoperability between geospatial data and services. In practice interoperability would mean that you could write a client application that talks to any server, without knowing any details about that server's implementation.
In this tutorial we will use the OGC API Features standard, which was designed for sharing feature data over the web (if you are wondering what a feature is, you can check out this article). These are some of its main traits, which make it very convenient to use:

In order to publish the dataset using the OGC API Features standard, we need a software which implements the standard. In this tutorial we will use pygeoapi, which is a python server implementation, released under a FOSS (MIT) license. pygeoapi needs a backend to store the data. For that we will use the MongoDB document oriented database. In order to make deployment easier, the complete stack was virtualised into a set of docker containers, and orchestrated using docker-compose. 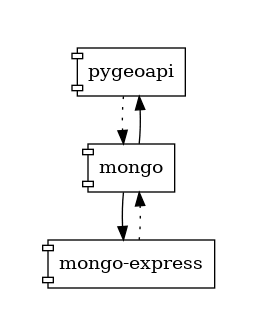 In order to publish the dataset, you can clone this repository. If you navigate to the docker/examples/mongo folder, you will find this docker-composition:

Here is what happens behind the scenes, when you type docker-compose up:

If you want to explore the MongoDB collection, you can use the provided mongo-express user interface, running on port 8081: http://localhost:8081

Making your geospatial dataset available on the web using a standard, unlocks a world of possibilities. It means that many existing (or future) client applications will be able to read your data, out-of-the-box. For instance, anyone can use QGIS, Esri ArcGIS, React-leaflet, OpenLayers or Python OWSlib to pull your data and analyse it, or create products or services on top of it. 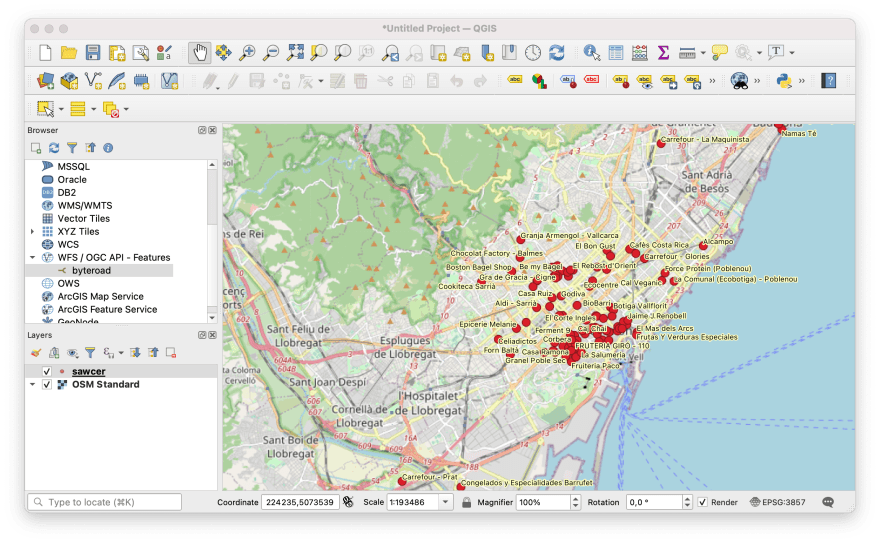 Once suspended, doublebyte will not be able to comment or publish posts until their suspension is removed.

Once unsuspended, doublebyte will be able to comment and publish posts again.

Once unpublished, all posts by doublebyte will become hidden and only accessible to themselves.

If doublebyte is not suspended, they can still re-publish their posts from their dashboard.

Once unpublished, this post will become invisible to the public and only accessible to Joana Simoes.

Thanks for keeping DEV Community 👩‍💻👨‍💻 safe. Here is what you can do to flag doublebyte:

Unflagging doublebyte will restore default visibility to their posts.