Object oriented programming (or OOP) is a style of programming that encapsulates data and behaviours into models known as objects. In this way, related code is grouped together and kept separate from other code, and provides reusable blocks that can be used to rationalise the problem at hand.

OOP is probably one of the most common forms programming, and many popular programming languages, including C#, Java, and JavaScript, are built with this in mind.

In a lot of languages, the blueprint for the object is known as a class. The class contains all the definitions for that object, including properties and functions (more commonly known as methods).

To create an actual object, we say that we create an instance of the class, in which all of the property definitions are given actual values. Importantly, we can have multiple instances of the same class existing at the same time, each with different values.

For example, we could create a simple Person class that has a name property and a speak method:

This is the blueprint. Now we can create two separate instances of the class, and the speak methods will give different outputs because each actual object is instantiated with a different value for the name property.

Although these are very simple examples, hopefully you can see the benefit of being able to create these object blueprints and create separate instances of actual objects.

However, it can be easy to misuse objects and create difficult-to-read or unstable code, if you're not careful. For example, you could potentially end up with a "God" class that has lots of unrelated behaviour crammed into the same object.

To help write good, maintainable, stable code, the SOLID principles have been described below.

The title here is pretty self-explanatory. A class should only have one responsibility. This is to avoid the "God" class scenario, where one class does everything, and helps split up your code into smaller, sensible chunks.

Although the single responsibility principle, is quite easy to understand, in practice it is not always so simple to spot when something belongs in a class and when it should be moved to a different class. Making this judgement is mostly a matter of experience, and you will get better at it with time.

If we go back to our Person class, we might decide that we want to save each person into a database. Therefore, it might seem sensible to create a method on the Person class:

However, the problem here is that the details of how to save a person to the database is an additional responsibility, and so that responsibility should be moved to another class.

The open/closed principle states that an object should be open for extension but closed for modification. This means that you should design you objects in such a way that they can be easily extended, without having to directly modify them.

For example, we could define two new classes, Employee and Manager, which are derived from the Person class, and a SalaryCalculator class.

In this example, the SalaryCalculator class violates the open/closed principle because, if we extend the program by adding a Director class, we would have to modify the CalculateSalary method to account for this.

To fix this, we could add a DailyRate property to each of the Person types. That way, we can add as many Person types as we want, and never have to modify SalaryCalculator.

The Liskov substitution principle states that every sub-class should be substitutable for it's base class and the program will still behave as expected.

As an example of violating the Liskov substitution principle, we could redefine our classes as:

With this definition we violate the Liskov substitution principle because the DailyRate will always evaluate to 0 in the SalaryCalculator and not the value of the sub-class.

The interface segregation principle states that a client should not be forced to implement properties and methods of an interface that it will not use. Therefore, it is better to define lots of small, specific interfaces, rather than few large, general interfaces.

As an example, we could define an IRepository interface for performing CRUD operations for our Person class on a database and implement it:

This is fine if we know that we will always need full CRUD functionality. But what if actually, we only require the repository to be readonly? At the minute, we're forced to implement the full CRUD operations, even if we don't need them.

Instead we can define multiple interfaces, and only implement the ones that we need.

Then we can optionally choose to make a implement readonly repository or a full CRUD repository.

The dependency inversion principle states that classes shouldn't depend on other classes, but instead should depend on the interfaces that those classes implement. This has the effect of inverting the direction of dependencies.

The problem with this is that it tightly couples the high level presentation to the low level implementation details. It's much better to have loosely coupled code, which can be achieved using interfaces. For more reasons for using interfaces, please see my previous blog post: 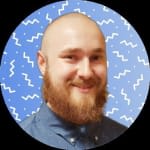 Top 3 Reasons to use Interfaces in Your Code

To invert the dependencies, we can create interfaces of each of the low level classes, and have those classes implement them:

Exception handling is an Antipattern | Avoid when possible

C# git tips: Use git hook to test your code

Once suspended, dr_sam_walpole will not be able to comment or publish posts until their suspension is removed.

Once unsuspended, dr_sam_walpole will be able to comment and publish posts again.

Once unpublished, all posts by dr_sam_walpole will become hidden and only accessible to themselves.

If dr_sam_walpole is not suspended, they can still re-publish their posts from their dashboard.

Once unpublished, this post will become invisible to the public and only accessible to Sam Walpole.

Thanks for keeping DEV Community 👩‍💻👨‍💻 safe. Here is what you can do to flag dr_sam_walpole:

Unflagging dr_sam_walpole will restore default visibility to their posts.