I Distrohop a lot and I found myself doing all this stuff manually which eventually got tiresome. So I created this script to help other Distrohoppers and new Linux users for easy setup and fixing of common issues.

It takes backup before manipulating stuff for easy recovery

On running the script for the first time, it will ask for your package manager.

Asusctl: only for Asus laptops

It will install Asusctl which is a tool developed for Asus laptops as an alternative of Armourycrate which used in Windows. It manages CPU profiles, fans, RGBs and a lot more. So if you have never heard about Asusctl, here is a link for it : Asusctl

Many a times some Linux Distros have an issue of determining your codec. This option prints your codec and gives u a link to check what codec you would require for proper functioning of your microphone.

Dual booting a laptop has its own issues. Many a times Windows causes issues with mounting NTFS partitions under Linux. This option gives you an easy approach to mount your partitions at boot without going through the wiki.

Most Linux distros ship with Tlp by defaullt as it helps save power and minimize heating up under loads. This options installs a Tlp configuration file which is customized for saving power on laptops with an igpu and dgpu. It also installs a systemctl service file which puts pci to powersaving mode.

I love Linux but sometimes I find myself in dependency hell when things don't uninstall along with their dependencies. This option helps take care of that. It uninstalls dependency packages left after removal of applications. 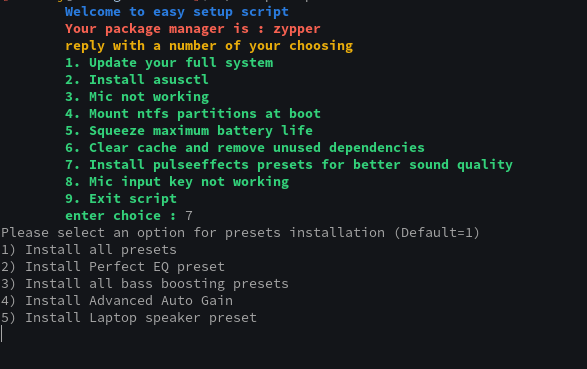 Audio under Linux can be a lot customizable which might overwhelm some people. This script installs the most useful and generic presets for getting good quality sound output from your machines.

This option is only for Asus laptops. The issue is that the current keycode being emitted by the driver is only recognised by Wayland. X11 and desktops using X11 require F20 to be emitted. This option creates a new key and registers it in the hardware database.

Want to buy me a coffee : Paypal || Crypto(preferred)

I created SaaS lead generation as an open-source project.

Swastik Dwivedi
A cybersecurity student who loves linux
Switching to Pipewire-Opensuse[GUIDE]
#opensuse #pipewire #linux
Fix No Video and Sound Output Through HDMI In Linux
#linux #ubuntu #nvidia #hdmi
I created Pycowin: An app which alerts you when vaccine slots are available in your area
#python #linux #opensource #api

Once suspended, drunckj will not be able to comment or publish posts until their suspension is removed.

Once unsuspended, drunckj will be able to comment and publish posts again.

Once unpublished, all posts by drunckj will become hidden and only accessible to themselves.

If drunckj is not suspended, they can still re-publish their posts from their dashboard.

Once unpublished, this post will become invisible to the public and only accessible to Swastik Dwivedi.

Thanks for keeping DEV Community 👩‍💻👨‍💻 safe. Here is what you can do to flag drunckj:

Unflagging drunckj will restore default visibility to their posts.