Hey 👋
Every time I spin a new Linux distro or have to set up machine that I'll use on a daily basis, there is some software I cannot do without. In this post, I'll list the apps that I'm currently using to manage both my work and personal projects.

I intend to write all macOS/Windows/Linux specific apps I use in future posts. For this list, all apps are cross-platform, which is kind of a must-have for me. I should also note that I'm using the free version of most of these apps. 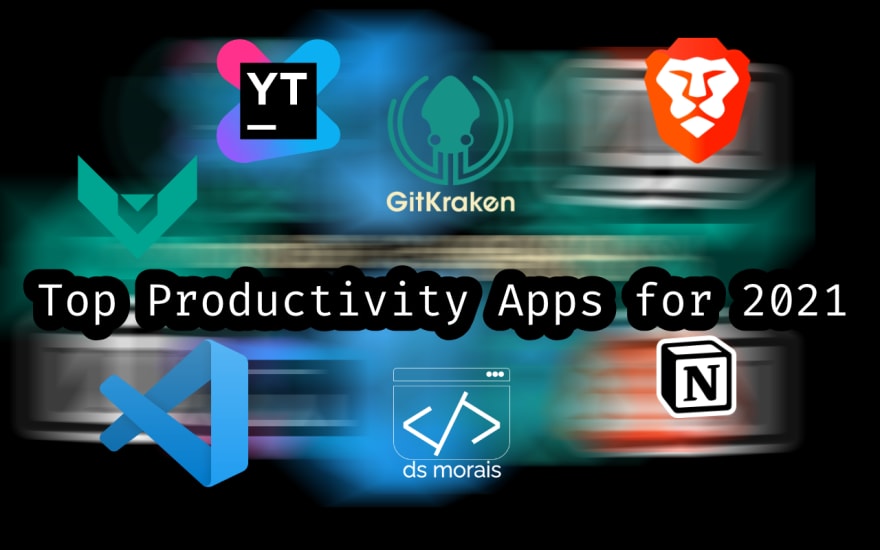 For 2 years I've worked on MDyna, a markdown notes application, mostly because there wasn't anything out there which met my requirements. Notion was around, but they had a pay wall on their 'blocks'. Once they ended the paywall, I was adamant about giving it another try.
But guess what, I've been using Notion as my life organizer for the last year. Currently my house chores, work tasks/research and code snippets live in my Notion dashboard.
There are plenty of videos on YouTube showcasing various ways to organize your Notion, so I won't go into that. Bottom line is that this is an amazing tool and you can run it on all platforms (if you're on Linux, you can use WebCatalogue, which we'll discuss later).

This is not as known as the first entry on our list, but I've been using it for 6+ months and I can say I've finally found a good password manager with a decent free tier.
I've used other password managers before, but most of the time, I forgot to add my accounts to them and barely used them. MYKI has MYKI syncs with your mobile, supports 2FA, Credit Cards Notes and IDs, all for free.
If you're looking for a new password manager, I suggest you check out MYKI

I've checked out an unhealthy amount of project management tools before I settled on YouTrack for my most recent project.

If you're looking for something simple and fast, I suggest GitKraken Boards as it has powerful sync features with GitHub and also allows for observers for freelance projects.

Personally, I like to arrange my dev tasks in sprints and chunk at them during my free time. YouTrack has a bit of a learning curve and can feel a bit 'heavy' at first, but after getting the hang of it and customizing every possible thing in my Project, I don't see myself changing to a different tool in the near future.

One of my favorites. It is also the only entry which I'm not simply using the free tier, so beware that some features listed may be paid.
In my first job, I had no git knowledge besides checkout, push, pull & commit, and was working with a senior developer who insisted on using a rebase workflow. For some time, I actually became known as 'rebases' on the co-working space due to the (admittedly too many) times my senior would re-explain the rebase workflow to me. Then I found GitKraken and really got the hang of wtf was going on in a git repository. Now I can do almost anything with a git repo.
I don't buy into that CLI vs GUI war. CLI is fast, and knowing the commands will save you a shit load of time and may prevent you from looking like a fool in conversations, but when you have a complicated git workflow/large teams/branch-palooza 🎉, actually looking at the branches state in a clean neat way will save you hours.

I ditched Chrome about a year ago. It was sluggish, and honestly, all the shady privacy stuff started to get to me. And I've used Edge for the most part of 2020, when running my personal setup with WSL. When I got fed up with WSL's flaws, I switched back to Linux and surprisingly found that Edge still does not support Sync on Linux :sad:. So I've tried Vivaldi, and while it's a cool browser with very distinct features, it just felt 'heavy' to use.

Enter Brave. Privacy is top notch as it comes in with a built in ad blocker. It also allows you to win crypto tokens (BAT) for watching personalized ads (via system notifications). They claim to be 6x faster than Chrome, which in all honesty, I cannot diligently confirm, but it's not sluggish and feels faster than Vivaldi.

Our lord and savior VS Code 🙏
Like Gitkraken, I've been using VS Code since my first job. I started with Brackets for basic HTML/CSS code, and briefly used Atom before making the switch.
It's got an ever growing eco-system of extensions, it's blazing fast and packs a ton of features out of the box. For Free.
I'll write a post for the best extensions I have in my VS Code setup in the future.
Be sure to check VS Code and give it a chance, even if you've stuck with Sublime/Atom for years.

There are some apps (like Notion) are not entirely cross-platform and need to be used via browser or some unofficial client. Web Catalog provides that wrapper and a clean AppImage format with Linux desktop support. I use it for Notion on Linux, but also for YouTrack or Google Drive in Windows. It's nothing fancy, but deffly gives the feel of a native app more than a browser PWA window.
This also includes Rambox/Franz like 'apps' that support having other 'apps' within them. So if you have 5 different chat tools, this can be quite handy.
They have some cool features on the paid plan, so be sure to check it out.

That's it for now guys. Since all of these are cross-platform. I'll try to keep posting regularly, next I'll write about all the mac/Linux/Windows specific apps... or not.

Lemme know what you think about my productivity stack and what's yours.

Why you should use OAuth for your App.

How to become a better learner as a developer

David Morais
Got a languages degree, did not enjoy market, became developer <3
The PIE concept of OOP.
#codenewbie #womenintech #productivity #java
How's your experience with Xcode? (I want to cry 😭)
#discuss #dev #ios
5 things to do when NOT writing code...
#healthydebate #career #productivity #programming
Forem Open with the Forem app