Interpolation is a mathematical method for finding unknown intermediate values between two or more specified values.

Interpolation is widely used in animation (especially user interfaces) and game development, since it can be used to smoothly change numeric values, such as the position or size of an object.

Let's imagine that we need to move an object from point a to point b. We can simply set object's position to b

But in this case, the transition will be abrupt and unnatural. Interpolation comes to the rescue
which allows you to calculate intermediate values between a and b, instead of manually setting 100 positions between them to make the transition appear smooth.

Let's designate this percentage value of the variable t, which will be in the interval [0.0; 1.0], where for t = 0 the value will correspond to a, and for t = 1 correspond to b.

We can write it down as the following formula:

Let's create a class called Interpolations, where we will implement the linear interpolation method

This is the formula for linear interpolation.

You might be familiar with it if you used the methods in Unity, which are called Lerp
(stands for Linear Interpolation) and accept the same variables as arguments. Moreover, this formula is equivalent to calling the function Mathf.Lerp

This interpolation can be expressed as a regular line on the graph, which is why it is called linear. 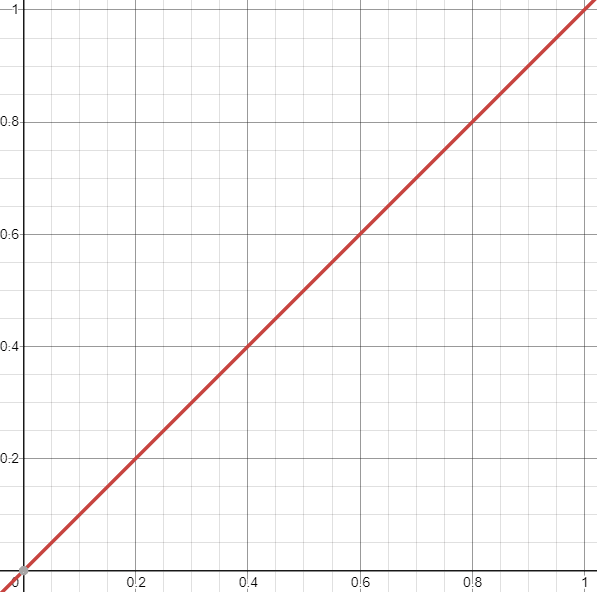 Interpolation can be applied to any numeric values, so we can add analog of the function Vector3.Lerp,
which will return linear interpolation between two vectors,
to our Interpolations class without any problems

Using this linear interpolation function in the Update method or inside
coroutine you can achieve a smooth movement of the object.

If we call method StartCoroutine(SmoothMove(new Vector3(4, 0, 0))),
and after its execution we take a look at the position of the object in the inspector, we can notice that the position values don't correspond to the final ones.

Why is it so? Due to the fact that the value of Time.deltaTime,
which we add to t, is not fixed t, will most likely not equal 1, but will stop at a value close to it, for example 0.98976.

To fix this, after the loop, we can manually set final value to our mutable variable

After these changes, at the end of the movement, the position of the object corresponds to final values, and we got a smooth animation

Thanks to interpolation, you can smoothly change not only the position of objects,
but any numerical values: size, color, rotation, etc.

For most types in Unity there is a Lerp function: Vector2,
Vector3, Color,
Quaternion

Interpolation is not only linear.
So one of the most popular non-linear interpolation methods is ease-in-out
uses the following formula:

and can be represented as a transformed cubic parabola 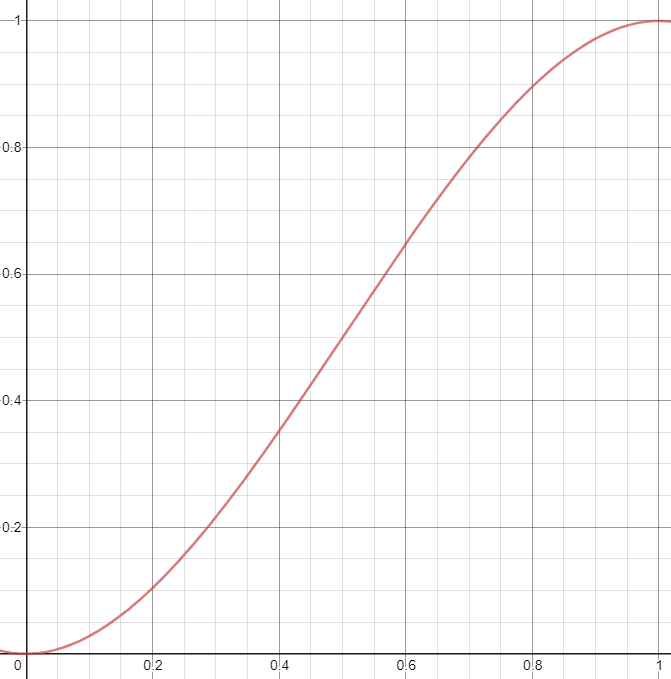 The popularity of this interpolation method is due to the fact that it allows you to reproduce
more realistic movement of the object, when at the beginning of its movement the object is accelerated and
picks up speed, and when stopped, it drops and slows down smoothly, as can be seen on the graph.

The code implementation of this interpolation method will look like this:

Here is an example of moving objectease-in-out interpolation

As you can see above, our object first picks up speed and accelerates, and then drops it and slows down.

But what if we want to have more flexibility in interpolation control, what if we want
our object was accelerated only at the beginning of the movement, but decelerated sharply or vice versa.
Or at first it would move back, taking acceleration, and only then move to the final position.

Unity has Animation Curves, which can be used for this
goals, but I want to show you how to do it without using them so you can better understand
how more complex interpolation works, including Animation Curves.

In this case, wonderful Bézier curves come to our rescue, which are used not only in interpolation,
but also, for example, in vector graphics.

Thanks to Bézier curves, we have new arguments that help us control the appearance of our graph.
Depending on the number of arguments, the Bézier curve will be quadratic, cubic, etc.

For this, we introduce a new variable p, which will help control
the shape of the graph and will be an intermediate variable in interpolation.

Then calculate the linear interpolation between p and b, let it be q1

Finally, we must calculate the linear interpolation between q0 and q1.

This will be the result of the quadratic Bézier interpolation.

This can be written as the following formula:

If you expand this formula, you get the following:

Or in the form suggested by wikipedia:

This is a quadratic Bézier interpolation that can be represented by various transformations of
parabola, depending on the value of p, or a straight line if p
equals to the average value between a and b.

This is how the graph looks like when p = a 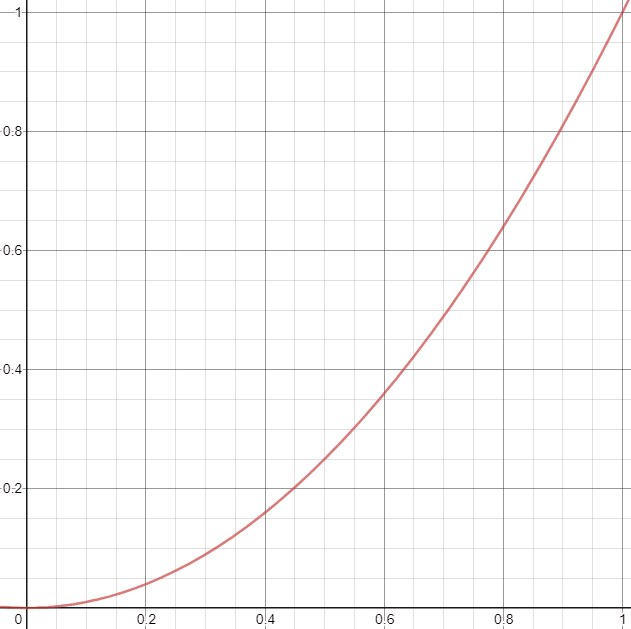 Thanks to such a graph, you can get smooth acceleration and hard braking.

This is how the graph looks like when p = b 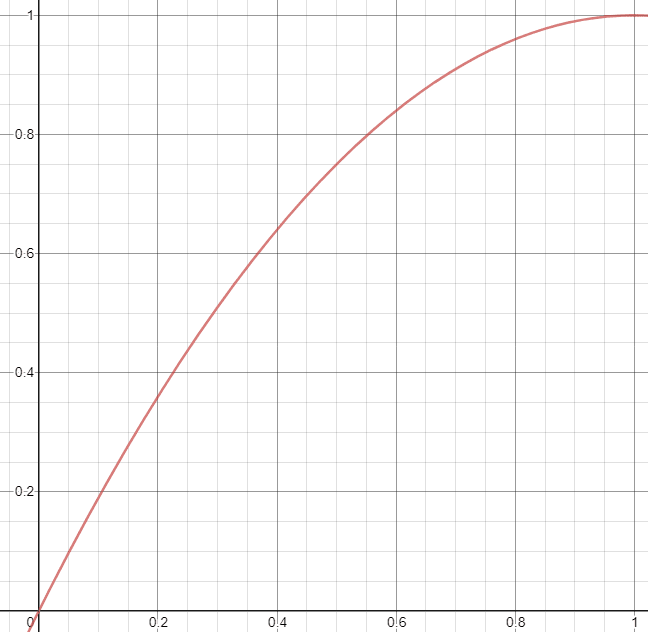 Here you can get sharp acceleration and smooth braking.

Implementing quadratic Bézier interpolation in your code would look like this:

If we now call StartCoroutine(SmoothMoveWithExtraPosition(new Vector3(5, 0, 0), new Vector3(0, 5, 0))), then we get an object that will be moving in an arc

Moreover, we can move in the arc precisely because of the curve.
If we tried to do the same, but through 2 separate linear interpolation calls first to the intermediate top position, and then to the final, then the object would move in a triangle, not an arc.

We can also make our object pass slightly final destination and returned to it, calling
StartCoroutine(SmoothMoveWithExtraPosition(new Vector3(5, 0, 0), new Vector3(8, 0, 0)))

Agree that with quadratic Bézier interpolation, a lot more possibilities open up for us,
but that's not all. The beauty of Bézier curves is that you can add as many arguments to them,
as you want.

To calculate the result of this interpolation we need:

Calculate linear interpolation between a and p1, let it be q0

Calculate linear interpolation between p1 and p2, let it be q1

Calculate linear interpolation between p2 and b, let it be q2

Now let's calculate the linear interpolation between q0 and q1, let it be r0

We also calculate the linear interpolation between q1 and q2, let it be r1

If you expand this formula, you get the following:

Let us expand in more detail:

Simplifying the expression, we get:

Or as wikipedia suggests:

Cubic Bézier interpolation can be expressed by different transformations of a cubic parabola,
depending on the values of p1 and p2. 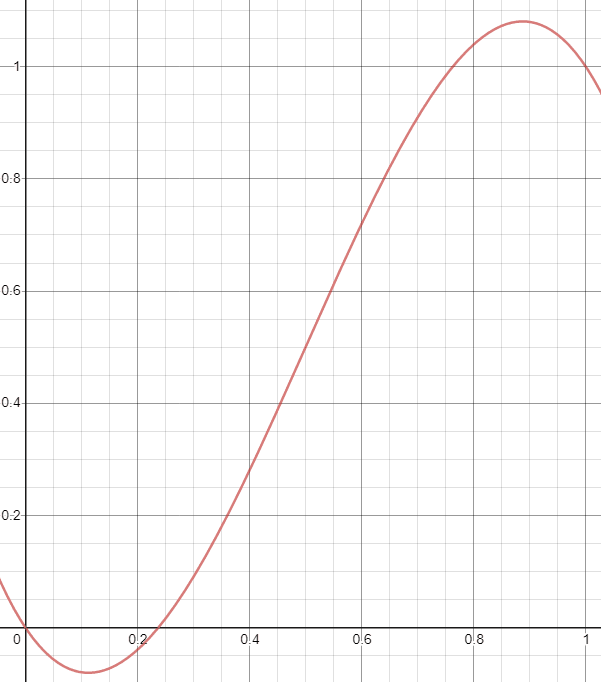 Th anks to it, you can achieve the effect when the object drives back to accelerate, moves over the final point and returns to it. 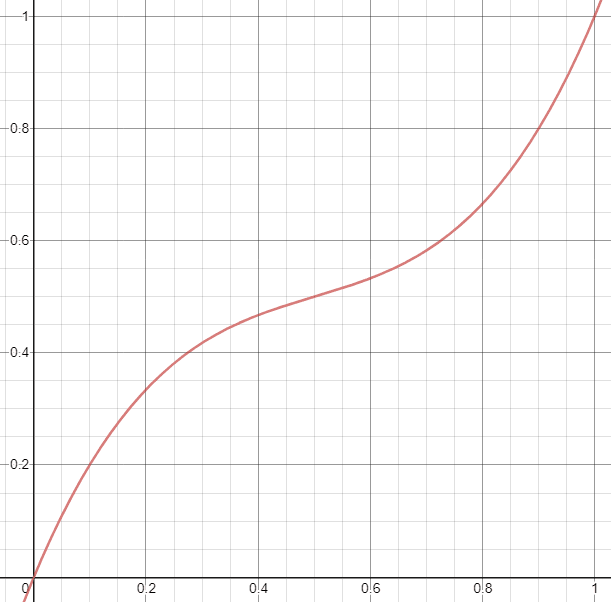 Implementing cubic Bézier interpolation in code would look like this:

Now we can set up to 2 additional positions along the path of our object.
One of the examples, when the first position was less than a, and the second more than b, you can see above.

It is not necessary that the positions differ along one axis only.
Here's a sample code to make our object move along the z axis as it moves

It would be possible to continue adding new arguments ad infinitum, but as a rule there is no need for this and
most problems can be solved using a quadratic or cubic Bézier curve.

Control over interpolation time and speed:

So, thanks to Bezier curves, we learned to control the type of interpolation, but not its time or speed.
Now we are limited to one second, because t is in between [0.0; 1.0], but what if we want for the object
to move for 2 seconds or 0.5?

To do this, you can declare the variable d, which will be responsible
for the duration of the interpolation. And to keep t in the range [0.0; 1.0], we can
divide t by d, when we pass it to the interpolation function.

The interp olation speed can also be controlled, for this you can declare
a separate variable s, by which we will multiply
Time.deltaTime, when we add it to t

Now we are able to control both the type of interpolation and its time and speed.

Denis
Software developer who pretends to be an interesting person
How to Access Local Sever on Other Devices
#webdev #javascript #react #tutorial
Resolving Merge Conflicts with Visual Studio Code
#tutorial #vscode #productivity #codenewbie
15,000 GH stars in a year: how we did it 🤩
#opensource #career #devjournal #programming

Once suspended, dsyncer will not be able to comment or publish posts until their suspension is removed.

Once unsuspended, dsyncer will be able to comment and publish posts again.

Once unpublished, all posts by dsyncer will become hidden and only accessible to themselves.

If dsyncer is not suspended, they can still re-publish their posts from their dashboard.

Once unpublished, this post will become invisible to the public and only accessible to Denis.

Thanks for keeping DEV Community 👩‍💻👨‍💻 safe. Here is what you can do to flag dsyncer:

Unflagging dsyncer will restore default visibility to their posts.