Disclaimer:- This article is a mixture of

This is a list of popular projects that are implementing a JavaScript engine:

We will be discussing mostly Chrome V8 Engine.

V8 can run standalone and at the same time, we can add our own function implementation in C++ to add new features to JavaScript. 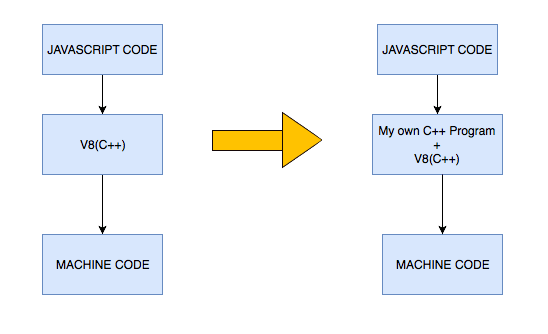 So for example: print('hello world')is not a valid statement in Node.js. It will give an error if we compile it. But we can add our own implementation of the print function in C++ on top of the V8 which is open source at Github, thus making the print function work natively. This allows the JavaScript to understand more than what the ECMAScript standard specifies the JavaScript should understand.

This is a powerful feature since C++ has more features as a programming language as compared to JavaScript, as it is much closer to hardware like dealing with files and folders on the hard drive.

Allowing us to write code in C++ and making it available to JavaScript makes it so we can add more features to JavaScript.

Node.js in itself is a C++ implementation of a V8 engine allowing server-side programming and networking applications.

How to write optimized JavaScript