It was a nice and calm work day when suddenly a wild collegue appeared in front of my desk and asked:

– Hey, uhmm, could you help me with some strange thing?

– I have data corruption and it’s happening in a really crazy manner.

If you don’t know, data/memory corruption is the single most nasty and awful bug that can happen in your program. Especially, when you are storage developer.

So here was the case. We have RAID calculation algorithm. Nothing fancy – just a bunch of functions that gets pointer to buffer, do some math over that buffer and then return it. Initially, calculation algorithm was written in userspace for simpler debugging, correctness proof and profiling and then ported to kernel space. And that’s where the problem started.

Firstly, when building from kbuild, gcc was just crashing1 eating all the memory available. But I was not surprized at all considering files size – dozen of files each about 10 megabytes. Yes, 10 MB. Though that was not surprizing for me, too. That sources was generated from assembly and were actually a bunch ofintrinsics. Anyway, it would be much better if gcc would not just crash.

So we’ve just written separate Makefile to build object files that will later be linked in kernel module.

Thorough source code reading had led to nothing. We saw that memory buffer was corrupted exactly in calculation functions. But that functions was pure math: just a calculation with no side effects – it didn’t call any library functions, it didn’t change anything except passed buffer and local variables. And that changes to buffer were right, while corruption was really corruption – calc functions just cannot generate such data.

And then we saw a pure magic. If we added to calc function single

then data was not corrupted at all. I thought such things were only subject of DailyWTF stories or developers jokes. We checked everything several times on different hosts – data was correct. Well, there were nothing left for us except disassemble object files to determine what was so special about printk.

So we did a diff between 2 object files with and without printk.

Ok, looks like nothing changed much. String declaration in .rodata section, call to printk in the end. But what looked really strange to me is changes in%rsp manipulations. Seems like there were doing the same, but in the printk version they shifted in 24 bytes because in the start it does subq $24, %rsp.

We didn’t care much about it at first. On x86 architecture stack grows down, i.e. to smaller addresses. So to access local variables (these are on stack) you create new stack frame by saving current %rsp in %rbp and shifting %rspthus allocating space on stack. This is called function prologue and it was absent in our assembly function without printk.

You need this stack manipulation later to access your local vars by subtracting from%rbp. But we were subtratcting from %rsp, isn’t it strange?

Wait a minute… I decided to draw stack frame and got it! 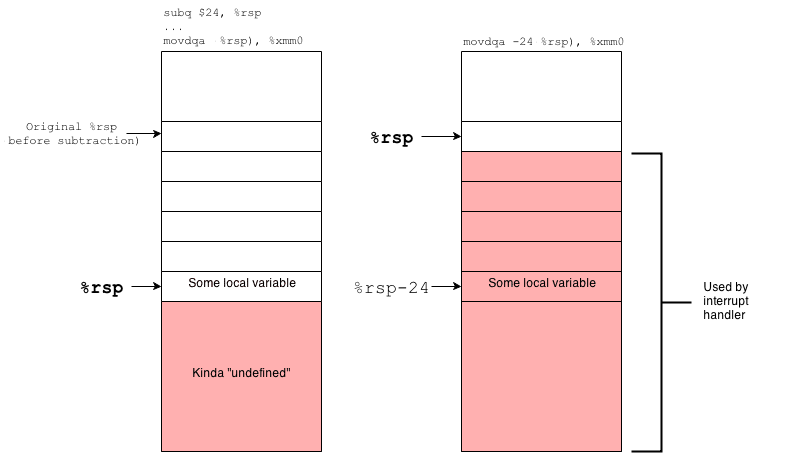 Holy shucks! We are processing undefined memory. All instructions like this

moving aligned data from xmm0 to address rsp-24 is actually the access over the top of the stack! 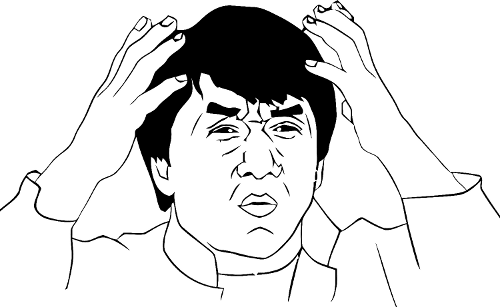 I was really shocked. So shocked that I even asked on stackoverflow. And the answer was

In short, red zone is a memory piece of size 128 bytes over stack top , that according to amd64 ABI should not be accessed by any interrupt or signal handlers. And it was rock solid true, but for userspace. When you are in kernel space leave the hope for extra memory – stack is worth its weight in gold here. And you got a whole lot of interrupt handling here.

But remember that we weren’t be able to build with kbuild because it was crashing every time due to huge files.

Anyway, we just added in our Makefile EXTRA_CFLAGS += -mno-red-zone and it’s working now. But still I have a question why adding printk("") leads to preventing using red zone and space allocation for local variables with subq
$24, %rsp?

So, that day I learned a really tricky optimization that at the cost of potential memory corruption could save you couple of instructions for every leaf function.

How to Remove Empty and Non Empty Directories in Linux

Why references to `OPENSSL_init_crypto' are undefined when crossbuilt openssl from source for windows 32 bit?

Once suspended, dzeban will not be able to comment or publish posts until their suspension is removed.

Once unsuspended, dzeban will be able to comment and publish posts again.

Once unpublished, all posts by dzeban will become hidden and only accessible to themselves.

If dzeban is not suspended, they can still re-publish their posts from their dashboard.

Once unpublished, this post will become invisible to the public and only accessible to Alex Dzyoba.

Thanks for keeping DEV Community 👩‍💻👨‍💻 safe. Here is what you can do to flag dzeban:

Unflagging dzeban will restore default visibility to their posts.