Whether you're just learning Hugo or bringing your Hugo experience to a new project, there's a good chance you'll be reaching for Netlify's victor-hugo boilerplate. It's the first starter kit listed in the Hugo documentation and has earned over 750 shiny Github stars.

Here's a summary of what's in the boilerplate:

The great thing about victor-hugo and boilerplates in general is that you don't have to know exactly what every piece does before you can start using it. To get up and running with victor-hugo, you just need a few commands:

Navigate to http://localhost:3000/ and you'll be greeted by a webpage. 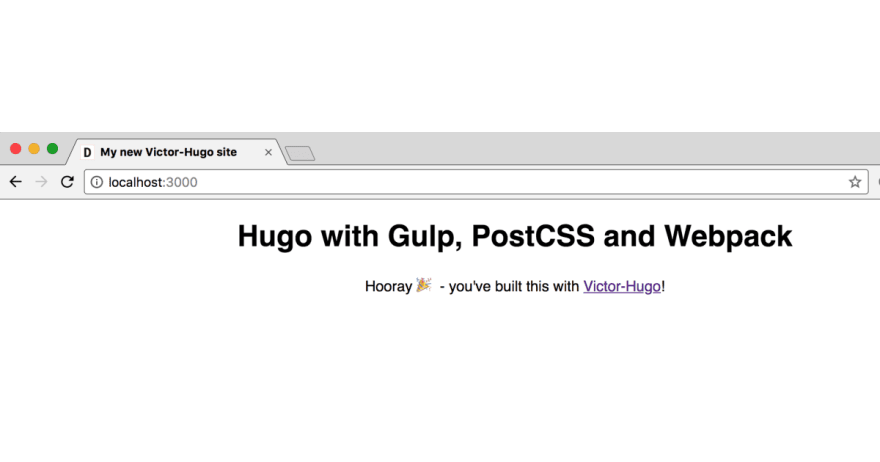 When you make changes to your assets in the src folder or your Hugo content in the site folder, gulp tasks will rebuild the content and the browser will refresh automatically. For small and medium-size sites this all happens in a few milliseconds, making for a very pleasant developer experience.

Here's how it works under the hood. The server gulp task watches for changes in site/**/* and then spawns a hugo process to build the site, which exits when it's done. Once the gulp task detects that the hugo process exited successfully, it notifies Browsersync to refresh the page. The code is in the buildSite() method in gulpfile.babel.js:

As the amount of content for your static site grows, however, this method might not build changes as fast as you want. Each new hugo process has to read all the content from disk and the time to do that increases as your site grows. For my site of around 90 pages, the rebuilding didn't quite feel instant anymore.

There is an easy way to make this process faster and more efficient. The trick is not to launch a new Hugo process (which does a full rebuild) on every change, but instead to use Hugo's built-in ability to serve & watch files with incremental rebuilds, also known as Fast Render Mode.

Hugo has a server subcommand that runs a built-in HTTP server and accepts a -w flag that watches for underlying files. As the Hugo docs mention, this has performance advantages:

"hugo server will avoid writing the rendered and served content to disk, preferring to store it in memory."

I created a fork of victor-hugo that adds a gulp task to take advantage of this Hugo feature. The task is called server-hugo and it uses the Hugo HTTP server in watch mode, just as if you ran hugo server -w.

Here's how the server-hugo task looks:

Here's the watchSite method that it calls:

In order to avoid losing any live-reload functionality from the original server task, this task uses Browsersync's proxying feature. Browsersync (on port 3000) sits in front of Hugo (on port 3001) so that it can inject its own instance of LiveReload into the page. With this setup, the browser will reload (or apply CSS changes) instantly after both Hugo and and asset rebuilds.

As of 0.3.0, Hugo speeds up live reloads by building only the parts of the site that changed. It's a great feature, squarely in the tradition of Hugo's relentless need for speed. However, in my experience it can lead to times where a change to one template or partial doesn't rebuild every page that it's included in.

If you run into that same issue, you can turn off incremental builds by adding a --disableFastRender argument to the hugo server command. The builds take slightly longer but the upside is that you'll never have to worry about stale content.

To add --disableFastRender to the gulp task above, just modify this line like so:

Create and Deploy your portfolio with Hugo!

Once suspended, dzello will not be able to comment or publish posts until their suspension is removed.

Once unsuspended, dzello will be able to comment and publish posts again.

Once unpublished, all posts by dzello will become hidden and only accessible to themselves.

If dzello is not suspended, they can still re-publish their posts from their dashboard.

Thanks for keeping DEV Community 👩‍💻👨‍💻 safe. Here is what you can do to flag dzello:

Unflagging dzello will restore default visibility to their posts.