I work as a developer. I have side projects, contribute to open source and maintain websites where I act as a developer. I’ve been doing this for several years now and love every part of it. You can almost say that I’m a developer.

But even though being a developer is a big part of my life and I spend much of my day as one, I’ve realized that I’m more than just a developer!

I came to this important realization not long ago. I was already aware of this as a fact, of course, but never gave it a deeper thought. I’ve been so focused on the details that I’ve somehow missed the bigger picture.

Put another way, being a developer is only a part of who I am.

Some of the other things I am are, but not limited to, a runner, a nature lover, a traveler, a dad, a husband, a friend... So why was I going around looking at the world through only one set of lenses or assumed only one role? As if I had all these other roles and responsibilities but I was rushing through them just so I can come back my “true” self.

I’m not really sure why it took me so long to come to this conclusion. One explanation can be the fact that some things just take time to crystallize in ones head. Sometimes time is the best teacher.

You’ve probably experienced this as well. You have knowledge about a lot of things/concepts but don’t yet understand the connection between some of them. Then one day, you wake up and say to yourself “Oh, I see it now!”.

But how does this realization affected me?

I feel more content. I try to give my full attention to whatever I’m doing. I don’t feel guilty about it! I don’t wish I had spent that time doing development instead.

Not long ago I decided to start this blog with the intention of having a place where I can share my thoughts. Or small tips. Or explore new ideas. A place which I can take in any direction I want.

I started to write. I’m certainly not the best writer but it didn’t take much time to notice that all my posts were still related to the fact that I’m a developer. As if I had unconsciously restricted myself to certain topics only because I happen to work in a certain field. Here’s how that looks as a formula (because math is the best):

I wanted to challenge that.

Three years ago I started running. It was something I decided to try so I can take breaks away from my desk. Going for a run has certainly helped me get in shape, clear my mind, explore the surrounding area and probably solve some nasty bugs. Most weeks I go out only once. It’s not much but I try to be consistent. So far I’ve ran four half marathons and I’m currently preparing for a fifth.

I wanted to highlight this part of me on the blog. I put my thinking hat on. What could that be and how would it look like?

I use Strava to track my runs. They also to have a nice API. So I used it to build a widget that shows my latest run. It‘s not much and in the future I want to add more stuff to it. Maybe show a map, images taken during a run or come up with a clever idea to mix a post with a run. Not because I’m a great runner, but because I’m more than just a developer! 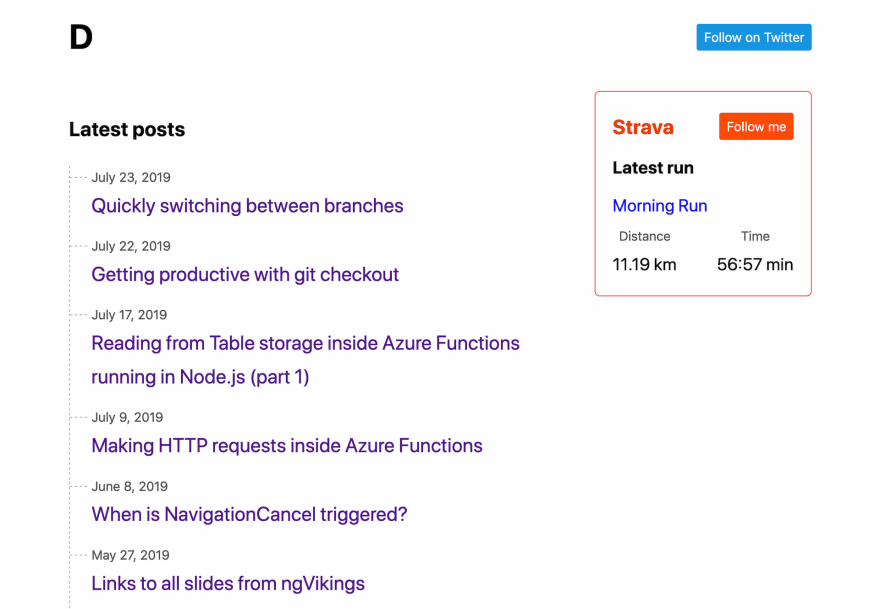 Now let me tell you something - YOU, too, are more than just a developer!

I bet you already know this but do you realize it? Do you rush through your other roles so you can come back to your “true” self? Do you feel you’re wasting your time while doing something else other than improving your skills as a developer?

You don’t have to!

So who are you? What do you enjoy doing besides being a developer/designer/...? Maybe you like reading, cycling, running, jumping, crocheting, cooking, spending time with friends and family?

Do you have a personal site/blog where you highlight that?

I’d like to hear from you in the comments below.

What does the quote "Lead with Value" mean in regards to interviewing or being in a leadership role?

Dzhavat Ushev
Front-end developer trying to make useful stuff.
I will work for free
#webdev #beginners #career #devops
How do you all create your resumes?
#discuss #beginners #resume #coverletter
What If Animals Could Code...
#jokes #discuss #webdev #programming

Once suspended, dzhavat will not be able to comment or publish posts until their suspension is removed.

Once unsuspended, dzhavat will be able to comment and publish posts again.

Once unpublished, all posts by dzhavat will become hidden and only accessible to themselves.

If dzhavat is not suspended, they can still re-publish their posts from their dashboard.

Once unpublished, this post will become invisible to the public and only accessible to Dzhavat Ushev.

Thanks for keeping DEV Community safe. Here is what you can do to flag dzhavat:

Unflagging dzhavat will restore default visibility to their posts.