With the increase of complexity and the overall evolution of new systems and applications, communication between entities is no longer just the client making requests to a server. There are many situations that require the server to inform the clients of certain events, and in some cases that information might even be needed in real-time, with little to no delay.

Here are some examples of use cases that need real-time communication of updates, from the server to the client:

This process is not always easy, especially when the system needs to manage a large number of clients, which increases the importance of some concepts like scalability. Let's check out some ways of implementing real-time communication from a server to clients.

Nowadays, the standard for client-server communication on the web is through the HTTP protocol. The process is simple: the client starts the request, initiates the communication with the server, and asks it to either return some information or perform a certain action. When the server receives the request, it parses its content and returns a response to the client. 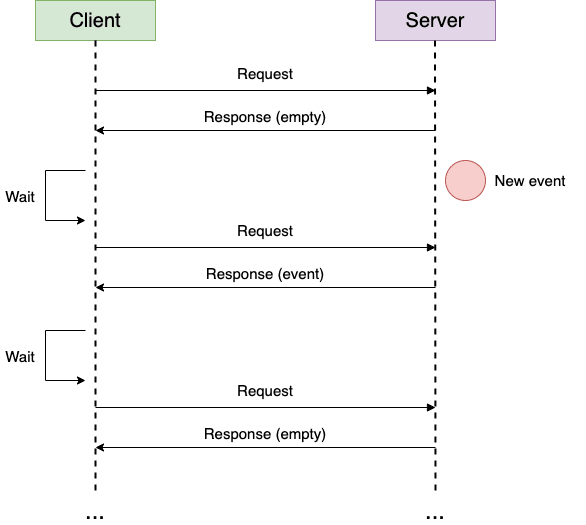 This approach is not very efficient, and has some heavy disadvantages:

Another solution that also uses HTTP requests and that solves some downsides of HTTP Polling is HTTP Long Polling.
The difference in this approach is that after an HTTP request from the client, the server saves and holds that request until there is an update to be transmitted to the client. When that happens, the response is sent back to the client, and the client issues another request to the server, that will only return when the server generates the next update. 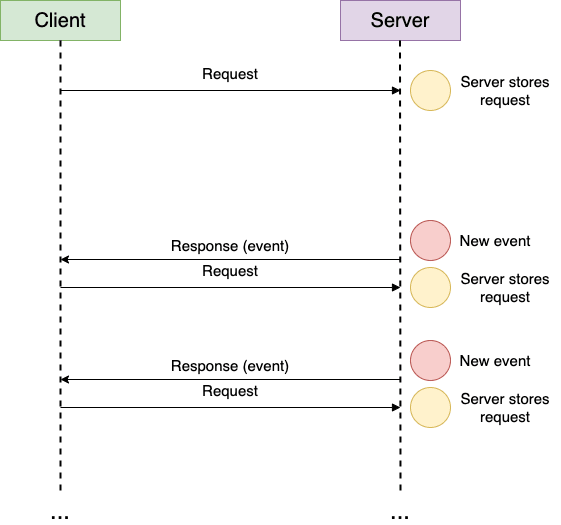 The disadvantages of HTTP Polling are somewhat mitigated. The overhead of issuing periodic HTTP requests is reduced by the server holding the requests and only returning if there are new updates. The message delays are also taken care of, because as soon as an update is generated, the server will respond to the currently stored request. So HTTP Long Polling can be used to implement real-time communication.

However, it still has some downsides, mainly when it comes to scalability. The server needs to store connections for every client that wishes to receive real-time updates, and if the number of users is large, that can be a problem. If the server events occur very frequently, then the number of HTTP requests from clients increases a lot.
Another problem is the need for a mechanism that prevents requests to be stored in the server indefinitely. It must be configured in a way so that connections do not stay alive permanently. This can be done with the use of connection timeouts, for example: after a certain amount of time, the server stops holding the request and sends back an empty response. It is then up to the client to issue a new request.

WebSocket is a standardized communication protocol that provides full-duplex communication (meaning that data can go both ways) over a single TCP connection. It enables 2-way communication between a web browser and a web server with lower latency than polling, by setting up a permanent connection between both and allowing information to be sent in both directions. Both are capable of sending messages anytime. The connection stays open until any of the two explicitly finishes it.

Unlike HTTP Polling or Long Polling, by having a WebSocket connection between a client and a server we can have the server issue updates to the client without it being first requested by the latter.

WebSocket is distinct from HTTP, however it uses HTTP initially to setup the connection between the client and the server. That HTTP connection is then upgraded to a full-duplex permanent WebSocket connection. 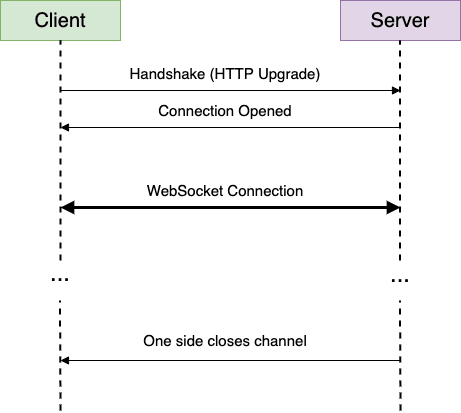 A lot of applications that need real-time communication are using WebSockets, from online games like agar.io to messaging apps like Slack.

The main advantages of using WebSockets are:

However, some downsides may still be visible in some systems:

Publish-Subscribe is a messaging pattern in which the entities involved can be classified as either publishers or subscribers. Subscribers show interest in certain types of messages. Publishers produce updates and events and, when a certain message needs to be sent, they will send it to everyone who subscribed to that type of message.
Using this pattern, the publishers do not send the message explicitly to each subscriber, but instead classify the messages according to their type and send it to one or more data streams called channels or topics. This way, each publisher has no information about who are the subscribers (if any) that will receive the published message. Similarly, each subscriber is not aware of which publishers (if any) there are; they subscribe to channels/topics of interest, so they can be notified when a new message has been published by a publisher.

By using this pattern, publishers and subscribers are decoupled and do not communicate directly, only through channels. This way, each publisher does not need to maintain a connection with all the subscribers, and only needs to care about sending messages to the channel. Similarly, each subscriber only needs to listen to the channels of interest in order to get the latest updates.

In practice, there is often an intermediary layer called a message broker, that handles the distribution and filtering of the messages. Some popular message broker technologies are RabbitMQ, Apache Kafka, and the AWS Amazon MQ. However, not every message broker is designed for real-time communication; some of them focus more on reliability and ordering of messages, for example.

So, how can we use the PubSub pattern to implement real-time communication from the server to the client?

The server will be the publisher: each event that is generated and that needs to be communicated will be encapsulated in a message and sent to the message broker. Every client is a subscriber and will be listening for events through the message broker, receiving them with little to no delay.

An advantage of using this approach for real-time communication is that it is very scalable. The server does not need to have a connection to every client, it only needs to send the events to the message broker. However, the message broker also adds more complexity, as it is another service that needs to be managed.
If we need full-duplex messaging, even though this can work the other way around if the server is a subscriber and the client is a publisher, an approach using WebSockets may be more advantageous.

A Webhook is a method of implementing a custom callback to some event. A server might provide a Webhook for a certain type of event, meaning that when that event happens, the custom callback is triggered. This custom callback comes in the form of an HTTP Request to some URL provided to that server, meaning that when the event occurs, the server will issue a request to the given URL, providing information about it.
While this can be used for client-server communication (browsers have a hacky way to have a JavaScript server running), it is most commonly used for server-server messaging.

Nowadays, web applications and systems in general are becoming more and more complex. In an era governed by data, it is essential to know how to design a system that can present to the user large quantities of information in real-time. In this article, we have covered several ways to do that, using various technologies, protocols and approaches, and discussing their pros and cons.
As always, I hope you have learned something new with this, and that it motivated you to research more about this topic! See you next time 😃

When to : SNS or SQS

Once suspended, eduardocribeiro will not be able to comment or publish posts until their suspension is removed.

Once unsuspended, eduardocribeiro will be able to comment and publish posts again.

Once unpublished, all posts by eduardocribeiro will become hidden and only accessible to themselves.

If eduardocribeiro is not suspended, they can still re-publish their posts from their dashboard.