If you’re looking to make it as a Senior Software Engineer, you’re probably aware of how important Concurrency concepts can be. With the rapid rise in the prevalence of multi-core machines, engineers who are able to skillfully navigate their complexity are highly desired by most tech companies today.

Concurrency problems are generally the interviewing barometer that separates Senior Engineers from Junior ones — and that can mean a difference in hundreds of thousands of dollars in compensation in some cases. Clearly, candidates who are serious about advancing their software engineering careers should have a solid grasp of this area.

To tap into this need, we worked closely with prominent software engineer C.H. Afzal to create a comprehensive course that guides learners through all they need to know to succeed at concurrency related questions for senior engineering interviews.

Check out Java Multithreading and Concurrency for Senior Engineering Interviews.

What is multithreading and why does it exist?

The simplest way to explain this is to think about how a machine with a single processor would compute a simple multi-step mathematical computation problem. Let’s consider the below function:

What the computer understands when it’s given this instruction is:

Lastly, multiply the results with each other

If we assume that each of these steps takes exactly 1 unit of time, the above would be completed in 3 units of time.

But what if two threads could be run simultaneously? In this case, both addition problems could be handled by different processors at the same time and then subsequently multiplied by each other once the result is found. In this extremely simplified scenario, the same computation that previously took 3 units of time would be completed in only 2 units of time — a saving of 33%. 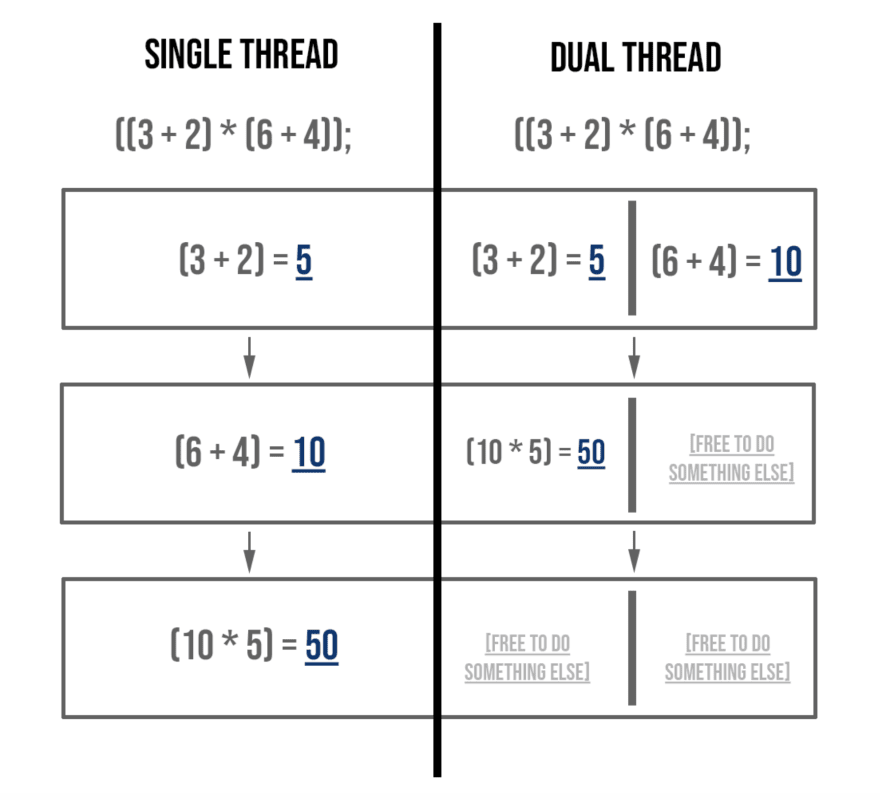 For a more practical example: if a processor wants to execute an instruction that requires pulling data from memory, it will generally take some number of clock cycles — let’s assume it takes 5. In this case, the next instruction can’t immediately start to use the value as it’s not yet ‘pulled’ from memory for 5 more clock cycles. A multithreaded processor could in this case simply start working on an instruction from another process in the meantime. It could, in fact, theoretically use these 5 clock cycles to execute 5 different tasks from 5 different processes.

In this way, multithreading on a given processor can give the illusion of multitasking to the user, even if at any one point in time the CPU is only actually executing one thread. When you combine the ability to have such “pseudo” multitasking on a single processor with the actual availability of multiple processors, countless processes can seamlessly be run simultaneously.

The limitations of concurrency

No text on multithreading is complete without mentioning Amdahl’s Law. This law stipulates that there will always be a maximum speedup that can be achieved when the execution of a program is split into parallel threads.

In the same way, software programs will always include portions which can’t be sped up, even if the number of processors is increased. These parts of the program must execute serially and aren’t sped up by running parallel threads.

Say our program has a parallelizable portion P = 90% = 0.9. Now let’s see how the speed-up occurs as we increase the number of processes: 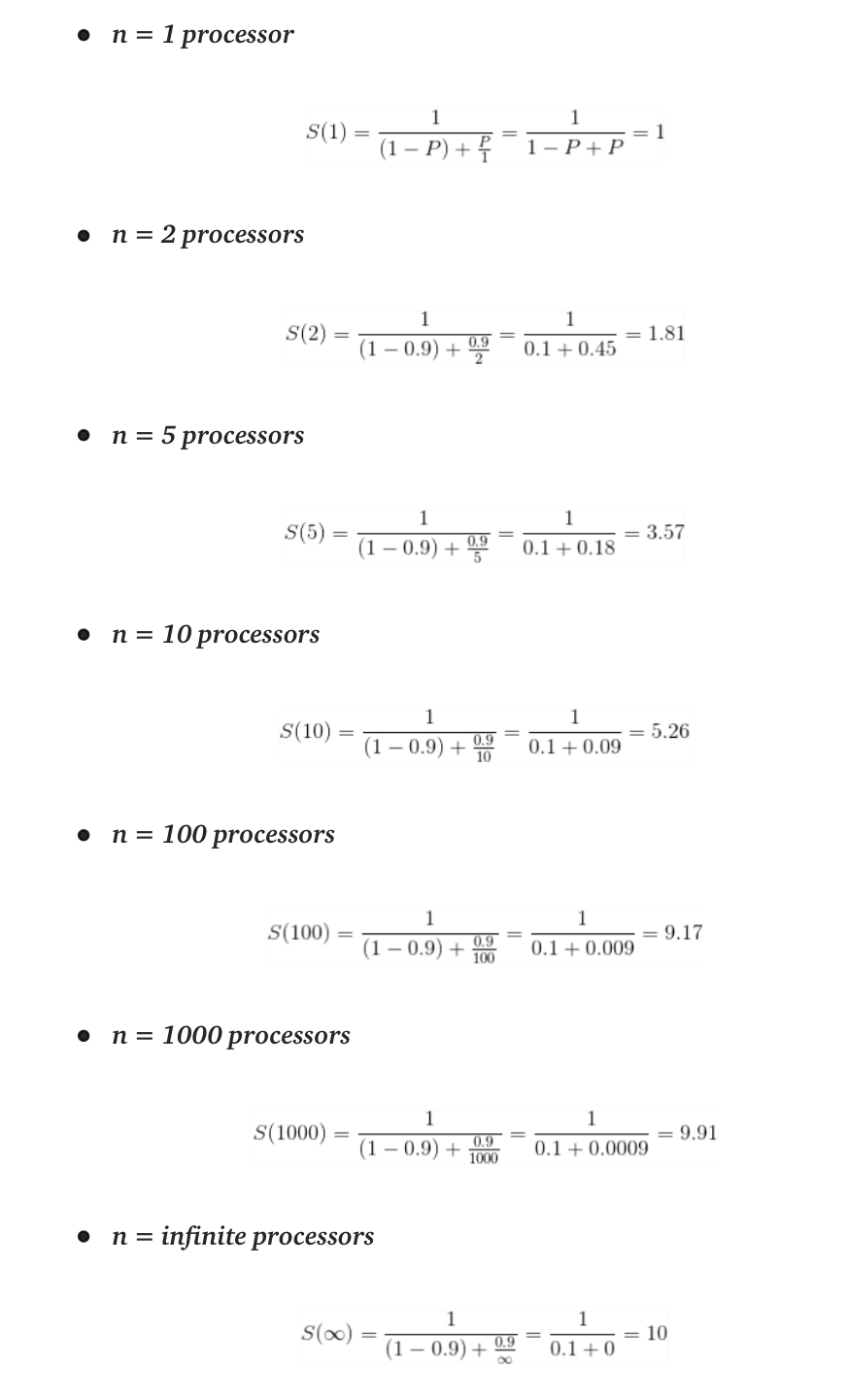 The speed-up increases as we increase the number of processors or threads. However, the theoretical maximum speed-up for our program with 10% serial execution will always be 10. We can’t speed up our program execution more than 10 times compared to when we run the same program on a single CPU or thread. To achieve greater speed-ups than 10, we must optimize or parallelize the serially executed portion of the code. 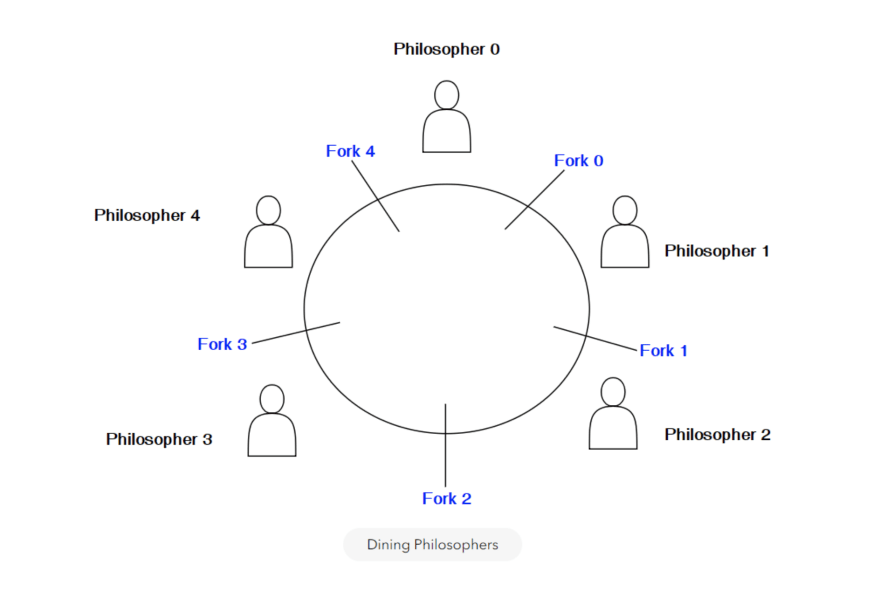 To get practice with these problems in embedded coding environments, check out Java Multithreading and Concurrency for Senior Engineering Interviews on Educative.

What I would like to do after reading The Pragmatic Programmer