Jupyter Notebook is an online computational notebook that allows you to combine code, comments, media, and visualizations in interactive documents. It has quickly become one of the most popular online computational notebooks, used by top companies such as Google, Microsoft, and NASA. Today, we’re going to explore Jupyter Notebooks and discuss their benefits and how to get started.

What is Jupyter Notebook?

In addition to the Jupyter Notebook, there’s also JupyterLab, which is a web-based IDE for Jupyter Notebooks. It allows you to set up your user interface to support various workflows in machine learning, data science, scientific computation, and more. With JupyterLab, you can run terminals, text editors, and code consoles in your web browser. You can also create your own plugins.

JupyterHub is another offering from Project Jupyter. JupyterHub is a multi-user version of Jupyter Notebook, designed for teams, classrooms, and labs. The hub allows you to deploy your notebooks to your organization, scale your deployment with Docker and Kubernetes, and provide uniform data management and access within your company.

Jupyter Notebook is a popular computational notebook, with over 2.5 million public notebooks available on GitHub. It’s used for a variety of things, such as:

Why use Jupyter Notebook?

Jupyter Notebook has become the standard computational notebook for data management. It’s used at many top companies, such as Google, Microsoft, IBM, Bloomberg, NASA, and more. Let’s take a look at some of the reasons why Jupyter Notebook is so popular:

Get started with Jupyter

Jupyter Notebook is not included with Python, so we’ll have to install it first. During our tutorial, we’ll use Python 3 and not Python 2.

There are a couple of ways to install Jupyter Notebook:

We can use pip to install Jupyter Notebook using the following command:

We can also use Anaconda, which is a Python data science platform. Anaconda has its own installer named conda that we can use to install Jupyter Notebook. Anaconda comes with some preinstalled libraries, including Jupyter Notebook, so if we already have Anaconda installed, we’re ready to get started working with the notebook.

Note: An additional way to try out Jupyter Notebook is to go to jupyter.org/try. You can select “Try Classic Notebook” to go through a basic tutorial of Jupyter Notebooks and IPython kernel using the classic interface. I will be using this for the tutorial today.

It’s time to get started with Jupyter Notebook! All we need to do is create a new folder and then go to that folder location in our terminal. Then, we can run this command to start Jupyter:

This command will open our default browser to the Juypter Notebook server. Now, we’re ready to create our first notebook!

It’s time to create one of our first notebook documents. We’ll select “File”, then “New Notebook”. Our screen should look like this: 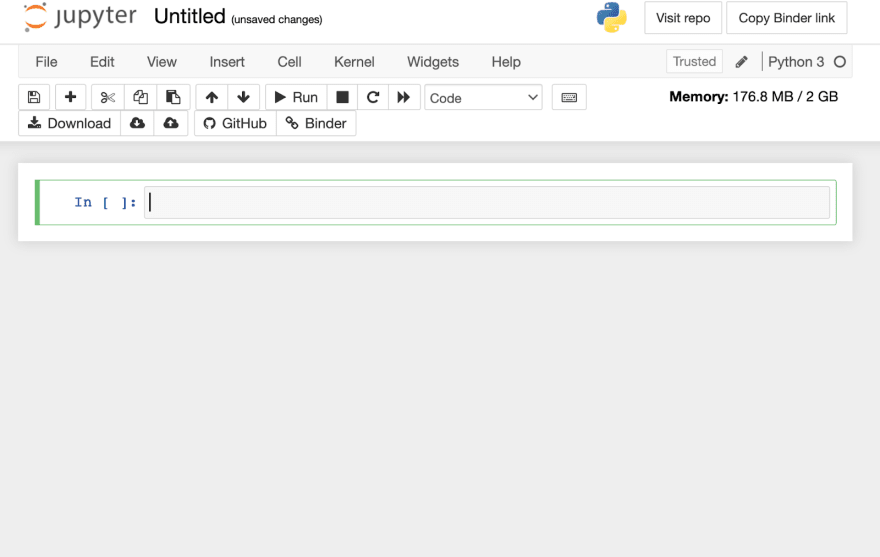 In the above image, we can see a list of menus on our screen. Let’s discuss what each of these menus does.

Note: We can use “File” to rename our notebooks. “File” also gives us the options to “Save and Checkpoint” and “Revert to Checkpoint”. These options allow us to save our progress at different checkpoints and return back to them if we want to.

When we first create a new Jupyter Notebook, the first cell defaults to using code and the kernel we selected at the beginning. Since we started with Python 3, we can run Python code in our cells.
Let’s check it out! We can follow these steps:

Let’s practice adding some content to our Jupyter Notebook. In this section, we’ll discuss Jupyter cell types, including code and Markdown.

We can use the “Insert” menu to insert a cell below our current one. Now, we can change our output type from “Code” to “Markdown”. We won’t spend much time discussing Markdown and its formatting, but let’s practice creating headers and making lists.

Jupyter Notebook previews the headers for us:

When we select “Run”, the cell will format nicely like this:

We can create bullet points in Markdown using single asterisks in place of bullets. Here’s what it’ll look like before we select “Run”:

Here’s what it looks like after we select “Run”:

Now, let’s learn more about how to share our notebooks. Jupyter Notebook comes with a nbconvert tool, which allows us to convert our .ipynb notebooks into many different formats including:

nbconvert is simple to use. All we need to do is open up a terminal, go to the folder that stores the notebook we want to convert, and run the command. The command looks like this:

Once we convert the notebook, we can share it however we want!

Congrats on taking your first step with Jupyter Notebook! It’s one of the most popular computational notebooks on the market. There are many more great ways to perform data analysis and visualization with Python. There’s so much left to learn. Some recommended topics to cover next include:

To get started learning these concepts and more, check out Educative’s learning path Python Data Analysis and Visualization. This curated learning path will help you master the skills to extract insights from data using a powerful assortment of popular Python libraries.

Create a Custom Template Tag for Currency Conversion in Django

Playing PyFlink in a Nutshell

pypa has started to monitor workflows and tests