Ruby is a popular open-source programming language mainly used for web development. Many big tech companies, like Airbnb, Twitter, and GitHub, are built on Ruby. A lot of Ruby's popularity comes from Ruby on Rails, which is a full-stack web application framework that runs Ruby.

The Ruby job market continues to grow, so learning Ruby will open up doors for you in your career. Today, we’ll dive deeper into the basics of the Ruby programming language and discuss syntax, key concepts, and more.

This tutorial will cover:

Ruby is an open-source, object-oriented programming language mainly used for web development. It was created in 1995 by Yukihiro Matsumoto, who wanted to create a scripting language stronger than Perl and more object-oriented than Python. He wanted something easy-to-use, functional, and dynamic.

Ruby is known for its simple syntax, making it easier to learn and understand. It has exception handling features like Java and Python, so it handles errors well. It’s also portable, working on various operating systems.

Let’s take a look at some of the perks of Ruby:

Let’s get started learning Ruby and learn how to write a Hello World!.

The best way to learn Ruby is to get some hands-on practice. An easy way to get started working with the language is to use Interactive Ruby (IRB). IRB is a REPL that launches from a command line, allowing you to immediately execute and experiment with Ruby commands.

Now, let’s take a look at how to print a Hello World! in Ruby using IRB. The way you access IRB is different depending on your operating system.

Note: puts is similar to print in other languages.

Let’s take a look at some of the fundamental pieces of Ruby programs and how to implement them.

In Ruby, we use variables to assign labels to objects in our program. You can assign a label to an object by using the assignment operator =, like this:

In the above example, we assigned the label amount to the object, which is the integer 5. Then, we used puts to print our variable. It’s important to remember that a variable is not an object itself, it’s just a label or name for an object.

Types of variables and their usage 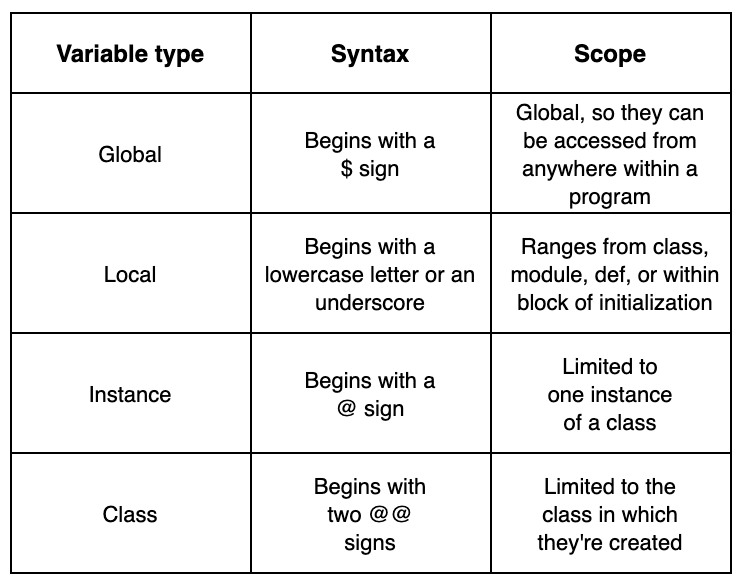 In Ruby, data types represent different categories of data, like string, numbers, text, etc. Since Ruby is object-oriented, its supported data types are implemented as classes. Let’s take a look at the various data types in Ruby.

Strings are made up of characters. You define them by enclosing characters within single ’string’ or double ”string” quotes. In the below code, both strings function the same way:

A boolean is a data type with two possible values: true or false. You use them in logic statements. They’re helpful when you want to make decisions. Let’s look at an example:

Arrays are data structures that can store multiple items of different data types. For example, an array can store both strings and integers. Items in an array are separated by commas and enclosed within square brackets [X, Y, Z]. The first item in an array has an index of 0. Let’s look at an example:

Symbols are like lighter versions of strings. They are preceded by a colon :. You use them instead of strings when you want to take up less memory space and have better performance. Let’s take a look:

Ruby comments begin with the # symbol and end at the end of the line. Any characters within the line that are after the # symbol are ignored by the Ruby interpreter.

Note: Your comments don’t have to appear at the beginning of a line. They can occur anywhere.

Let’s take a look at a comment in Ruby:

If you run the code, you see that the comments are ignored by the interpreter, and your output only includes the two puts statements.

In Ruby, functions are declared using the def keyword. The function syntax looks like this:

Ruby functions can accept parameters. Here’s how you can pass them:

When calling a function in Ruby, the parentheses are optional. We could also write the previous example like this:

When programming, we often want to check for a certain condition, and then based on that condition, perform one action or another. These are called conditionals. Let’s take a look at a conditional in Ruby:

Output: This number is between 1 and 5

Note: The elsif and else statements and branches are optional, but there must be an if statement and branch.

Now, we’re going to take a quick look at the shorthand syntax to write conditionals in Ruby.

We can append our if statement to the code on the if branch if it’s just on one line. So, instead of doing this:

We can instead do this:

This is a great example of the readable syntax of Ruby. Not only does the second example save us two lines, it reads very well!

In Ruby, when you define or execute a method, you can omit the parentheses. The following two lines of code mean exactly the same thing:

So, when do I use parentheses and when do I omit them?

Great question! There’s actually no clear rule about this, but there are some conventions. Here’s what we recommend you stick with for now:

Let’s take a look at some key Ruby concepts.

In object-oriented programming, classes are like blueprints for creating objects and methods that relate to those objects. The objects are called instances. Let’s say we have a class called Color, and within it, we have the instances red, blue, green, and purple.

We use uppercase letters to name our classes, so instead of color, we use Color. For class names that consist of several words, we use *CamelCase*, with the first letter of each word being capitalized.

Since Ruby is object-oriented, we work with objects. We can think of objects as doing two things: objects know things, and objects can do things. For example, a string holds a group of characters, but it can also perform an action onto those characters. The str.reverse method returns a new string with the order of the string’s characters reversed:

A constant in Ruby is a type of variable. They always start with an uppercase letter and can only be defined outside of methods. We typically use them for values that aren’t supposed to change, but Ruby doesn’t stop you from changing them if you want. Let’s take a look at some valid Ruby constants:

Ruby supports a large set of operators. Today, we’ll just take a look at the arithmetic operators and what they do. 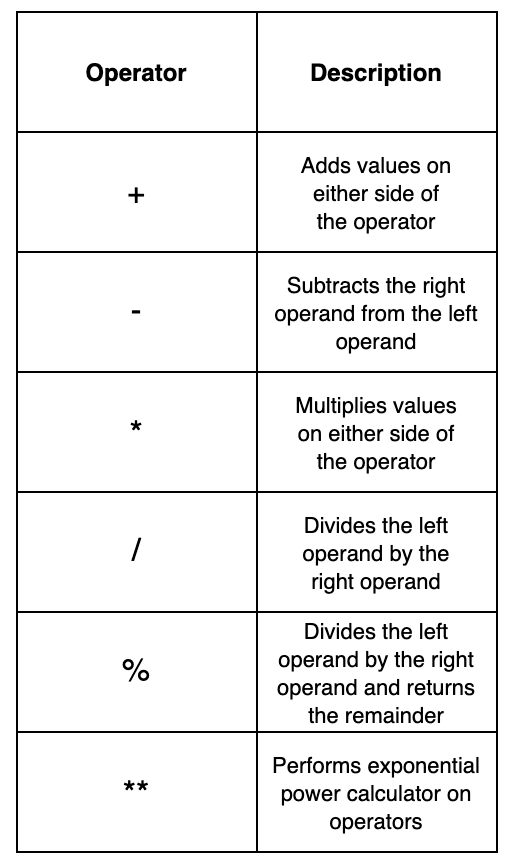 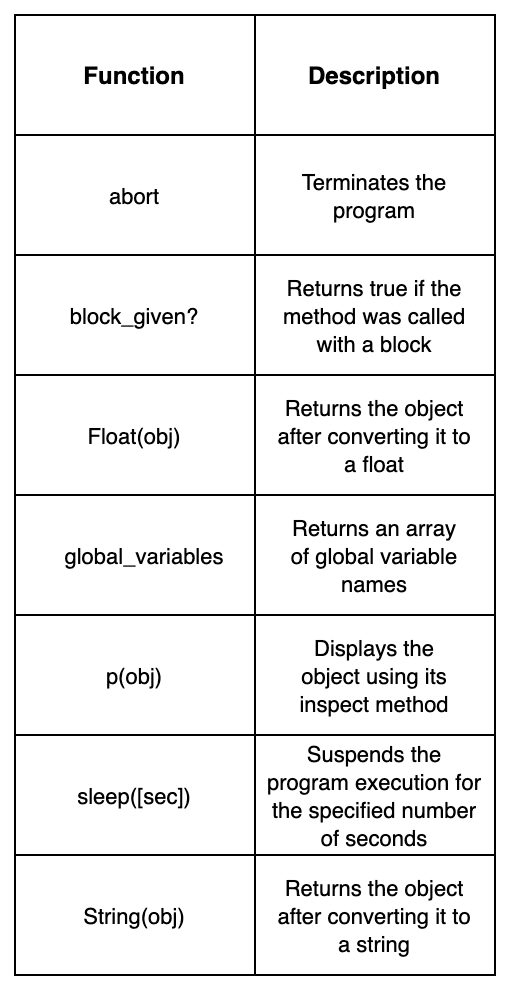 If you want to learn Ruby online, there’s no better time to start than now. Ruby is an in-demand programming language, so becoming familiar with the language will help you build long-lasting skills for your career development. We’ve already covered some of the basics, but we’re only just getting started with our Ruby learning. Some recommended concepts to cover next are:

To learn about these concepts and much more, check out Educative’s free course Learn Ruby from Scratch. This introductory Ruby course requires no prerequisites and provides you with hands-on practice with variables, built-in classes, conditionals, and much more. By the end of the course, you’ll know the basics of the most influential and demanding third-generation programming language.