Is your favorite programming language the most popular one in your state? Find out.

According to Wikipedia, there are more than 700 programming languages. The US is made up of 50 states, five major territories, and several minor islands. This data-driven article gives you insights into the most popular programming language based on each US state. The data used for this article was compiled by Education Ecosystem after surveying 15,000 US-based users on its platform.

*C is popular in Nebraska, Iowa, Arizona, and Rhode Island
*C# has a foothold in Maine, Connecticut, New Mexico, and Texas
*C++ has a huge ‘programmer-fan base’ in South Carolina, Nevada, Kansas, and Arkansas
*Delphi/Object Pascal takes the cake in Idaho, Mississippi, Oklahoma, and West Virginia
*Java is popular in Alaska, Montana, Pennsylvania, and Indiana
*JavaScript is popular in more states than any other language. It is popular in *California, Illinois, Missouri, Alabama, Wyoming, Oregon, and Wisconsin
*PHP is mainly used by programmers in South Dakota, New Hampshire, and North Dakota
*Python is popular in Tennessee, Minnesota, New Jersey, Colorado, and Louisiana
*R is preferred in the states of Hawaii, Washington, and Ohio
*Ruby has its mark in Massachusetts, North Carolina, Florida, and Vermont
*Swift is popular in North Dakota, Georgia, Michigan, and Virginia
*Visual Basic.NET’s popularity lies in Utah, Maryland, New York, and Delaware 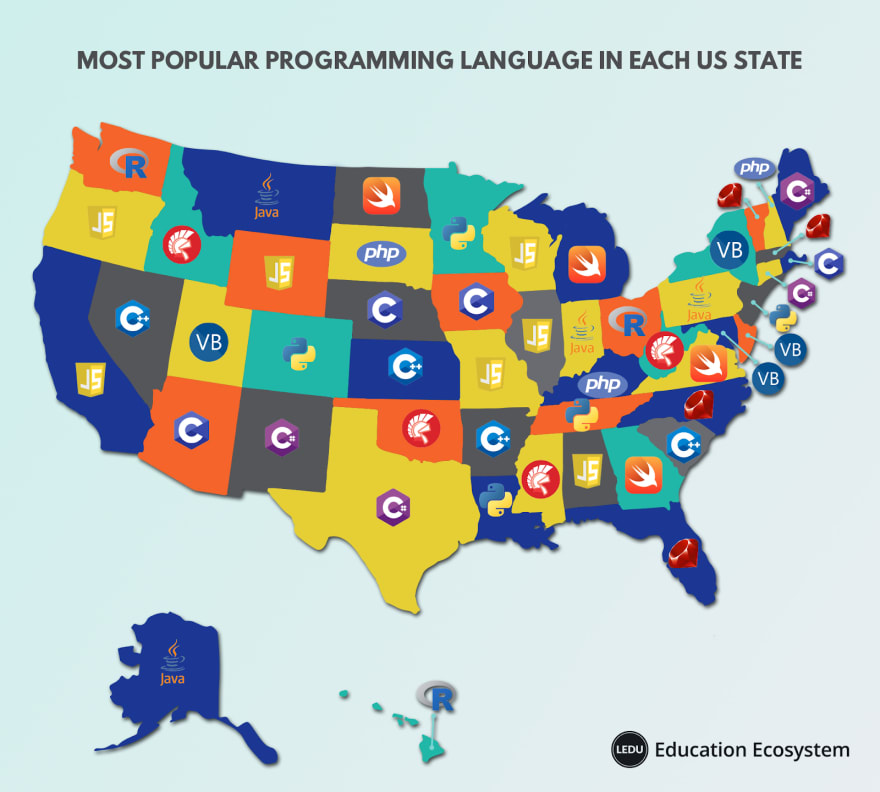 JavaScript has grown in popularity with the survey showing that it is favored in California, the tech capital of the United States. Its popularity can be traced to many factors. It is compatible with HTML and CSS. Beginner programmers argue that JavaScript is easy to learn, and its large collection of learning material is a major bonus point. JavaScript can be used for websites, mobile apps, and games.

Ruby, the dethroned king of programming languages, is considered an easy language to learn. The demand for Ruby programmers has increased resulting in a spike in its popularity. Its functions are said to be concise when compared with other verbose languages. C is a popular programming language because it allows programmers to work closely with the operating system. It has good flexibility in memory management. C is mainly used in language compilers, language interpreters, operating systems, and system utilities.

C# is popular among programmers working in the game development sector. It is mainly used for the creation of games using the Unity game engine, which is one of the most widely used game engines in existence. C++ is preferred by many programmers because it is faster and has better memory execution when compared with other languages.

Object Pascal is popular despite being an old programming language. It offers all the tools necessary for Object-Oriented Programming (OOP) although not on the same level as languages like Ruby or Smalltalk. It is fast, modular, verbose, and has good documentation and community.

Python is popular because it is productive, reliable, accessible, efficient and has amazing libraries, active community, corporate sponsors. R is the language of big data science. It is an open-source language and can lead programmers to good careers.

Swift was created in 2014 by Apple. This means it has the backing of one of the largest companies in the world. It is open-source (free), fast, and safe. Microsoft’s Visual Basic.NET is popular among developers working in office environments.

How to get a free server with EulerOS installed

Get a free server with EulerOS installed

Once suspended, eduecosystem will not be able to comment or publish posts until their suspension is removed.

Once unsuspended, eduecosystem will be able to comment and publish posts again.

Once unpublished, all posts by eduecosystem will become hidden and only accessible to themselves.

If eduecosystem is not suspended, they can still re-publish their posts from their dashboard.

Once unpublished, this post will become invisible to the public and only accessible to Dr. Michael Garbade.

Thanks for keeping DEV Community 👩‍💻👨‍💻 safe. Here is what you can do to flag eduecosystem:

Unflagging eduecosystem will restore default visibility to their posts.