When you want to send briefly displayed messages to the user of your web application, Toasts are a cool way to do it. You know those little boxes that show up on the side and disappear after a while.

Without anything in place so far to display errors or confirm activity I went hunting for what Elm had to offer.

There weren't a lot of offerings, but Toasty (http://package.elm-lang.org/packages/pablen/toasty/1.0.4/Toasty) looked like it had some good customisation capability and the demo certainly looked the part. 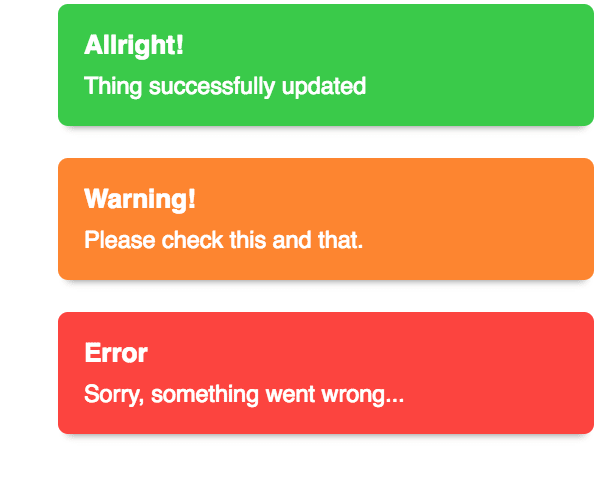 In my ideal world I'd install the package, edit a config file and start calling the module. Oops, that sounds like Javascript...

In this case there was stuff to add to the Model, initial model, a type alias, an update branch, and view stuff. I don't know if this is the price of type safety, or how possible it is to make Elm modules more independent. I'm just grateful people are writing these libraries at all.

AS STEP 1 - I recommend just following the instructions on that part of it.

At about this point and after playing around with Toasty.config things weren't working for me in that I was getting text showing on the screen that disappeared - good - but no box around it - bad.

Usually I skim read things and assume a 'work-out-of-the-box' mentality. Then when I hit problems I go back. In this case I re-read the opening bit which mentioned Toasty.Defaults. This gave me a starter Toast definition, which was handy but I wasn't otherwise much the wiser.

So time to read or at least look at the source code. Whamo there's an example App.elm in there that appears to be the code for the demo. I also found there Defaults.css and Toasty.Defaults, which you can customise. I needed to reposition my Toasts and change the widths for example.

AS STEP 2 - Bring Defaults.css and Toasty.Defaults into the app and customize to your needs. Then make sure all your references to myConfig are to Toasty.Defaults.config

This provided the missing pieces I needed to get it up and running.

Now I only had one issue remaining. I really wanted a minimum calling api. The site was suggesting putting this on the end of update functions:

I liked the idea of feeding from update functions but there is no way I'm going to litter the code with lots of those.

The App.elm example had another version of addToast that simplified things to:

I really just wanted to cover 90% of usage with something like:

This can be achieved by adding a helper function that assumes the config file and Update message names:

or what I really wanted was:

So (purists please avert your eyes):

AS STEP 3. Make your own helper(s) that keep it simple and flexible for you. For example you may want to specify the length of time each toast displays for. That's just one of the config options you have with Toasty that I haven't covered here.

In summary: A very useful and flexible module that in the scheme of things did not take long to get up and running.

Simple code is different from simplistic code: Elm vs JavaScript