In Week 6 we did our first group project, with the aim of building an AirBnb clone - MakersBnb.

On the Monday morning, we were randomly assigned our groups for the week, and we went away to form a plan with some goals. This is what we decided:

We then got going with the planning which included user stories, relationship diagram, and writing up a flow on the whiteboard of what we wanted the flow of the program to look like. This was what we decided we wanted for the front-end: 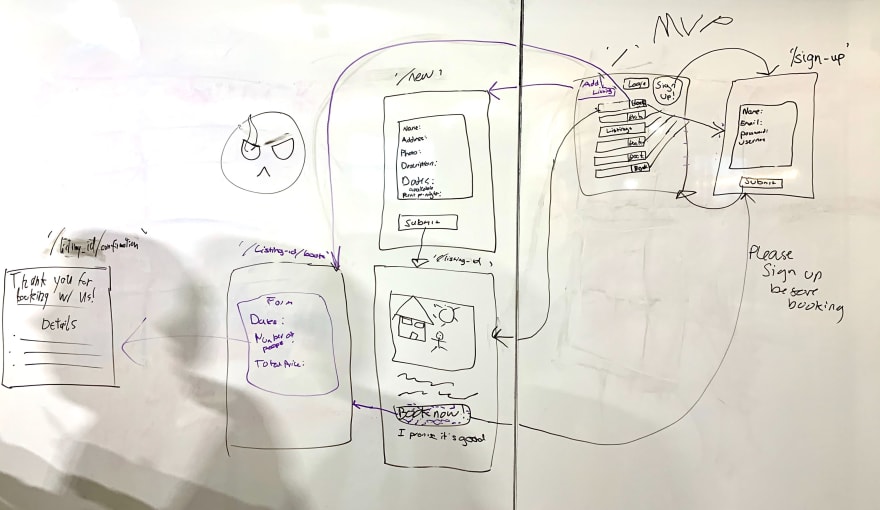 We decided we wanted to write the code in Ruby, tested with RSpec, as we did not believe we would have time during the week to take on a relatively new language (JavaScript) and link it to a new server and database. Ruby would produce better results at that point.

As we were a team of 6 we were able to have three pairs, and went about assigning each pair a section of the project in order for us to reach the goal of having an MVP by the Tuesday evening. My job with my pair, Julie, was to write the code for the Listing class. The other pairs would create the basic website structure using HTML, and create a User class.

By Tuesday evening, we had the MVP up and working as we did a loose version of mobbing on Tuesday to link up each class with the controller and the front-end.

Over the next few days we discussed a task for each pair in the morning stand up (either fixing a bug or advancing the program), and we would discuss the progress that we made on these either during the afternoon reflection or if it was a longer job that could not be completed in half a day, in the evening retro.

By Thursday evening, we had a fully-functioning site that allowed the user to login/sign-up/post a listing/view all listings/book a listing/view their booking confirmation. However, the site that we had at the moment had no CSS to it, which is a job that we undertook on the Friday once all the functionality had been done.

We ended up with a nice looking final product which we were all happy with, which worked well as an AirBnb clone. There are many things that could be developed, such as adding request/response functionality in order to book a listing. Overall, I really enjoyed my first group project!

How to Import Code in DEV from another compiler?

Overview some concepts in Kubernetes (K8s)

Ellie Manifold
Finding my feet in tech & writing about it
How to write your own JavaScript tests Web apps: Battle and RPS In Theory But Not in Practice

Once suspended, emanifold will not be able to comment or publish posts until their suspension is removed.

Once unsuspended, emanifold will be able to comment and publish posts again.

Once unpublished, all posts by emanifold will become hidden and only accessible to themselves.

If emanifold is not suspended, they can still re-publish their posts from their dashboard.

Once unpublished, this post will become invisible to the public and only accessible to Ellie Manifold.

Thanks for keeping DEV Community 👩‍💻👨‍💻 safe. Here is what you can do to flag emanifold:

Unflagging emanifold will restore default visibility to their posts.