A few months ago I was thrilled to be officially deemed a "UX Engineer" (UXE) at LogMeIn. I was going to get the chance to build Design Systems! But once the excitement wore off, I quickly realized how undefined the UXE role is. I tried Googling the position but came up empty handed.

Although a few companies, such as Google and Etsy, are starting to hire UXEs, the position differs vastly between companies.
Thus, after much research into the field, I believe I have finally narrowed down the role of a UXE, the skills needed to succeed, and the responsibilities.

Note that this role has been combined not only from all of the research I have completed, but from my personal experiences. If you're considering a role in UXE, please review the requirements for that position with your potential employer.

What Is A UX Engineer?

A UX Engineer (UXE) is a Front-End Engineer who sits on a cross-functional design team and helps facilitate collaboration between design and engineering.

UXEs possess the skill-set of a Front-end Engineer but with working knowledge of UX design principles. Their primary domain focuses on the design/UI component layer of an application and steers away from the middleware layer between front-end and back-end development.

Where Do UXEs Fit Into The Process?

How Are Their Skills Different From Front-End Engineers?

Since UXEs are at their core Front-End Engineers, there should be overlap between them, but UXEs employ design skills and are more focused on the UI than the middleware layer. 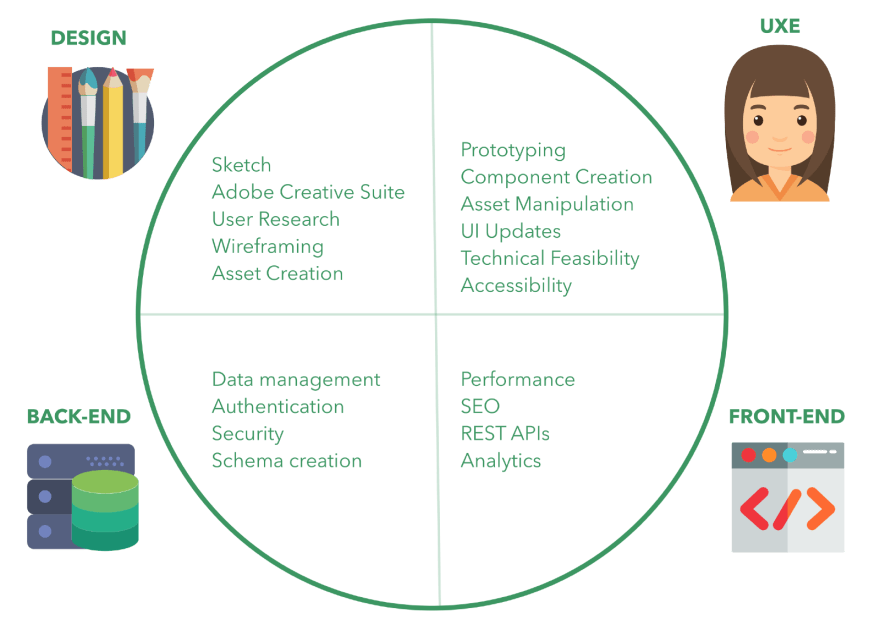 A Design System is the set of guidelines and assets which convey a sense of identity within multiple flagship products or applications. It's comprised of three pieces: the design language, component library, and style guide.

The coded components used to bring the design language to life. These components are built using HTML, CSS, and JavaScript. Some of the most popular Design Systems use the following JavaScript libraries and frameworks, but may also include native (vanilla JS) web components:

The website which documents and encapsulates both the design language and component library. IBM Carbon is a great style guide I recommend checking out.

What Do UXEs Do?

This is one area that varies vastly company to company, but here are a couple of major job responsibilities for UXEs:

Qualifications For A UXE Role

The qualifications for a UXE vary company to company, however they primarily include front-end development skills with a sprinkling of user experience knowledge.

Here are a few examples of UX design knowledge that a UXE might be expected to understand:

You may also want to familiarize yourself with some of the tooling used by the design team. These may include the following.

Typically if you have experience with one of these tools, the general skills transfer to the others; Sketch and Figma are the easiest tools to learn.

If you're looking to obtain a UXE role, I highly recommend the book Refactoring UI and the course Design For Developers by Sarah Drasner.

Here are a few skills you might want to brush up on prior to applying for a UXE role:

As a UXE you will interface with the Design System stakeholders: the design team, engineering teams, and product management. As a result, you must have great communication skills.

Here are some other skills you need to be an effective UXE:

To understand the skills you should obtain prior to the interview, refer to the previous sections: Qualifications For A UXE Role.
In general, the interview process will be much the same as a Front-End Engineer, so study up on your algorithms and JavaScript.

There are several companies hiring UXEs. Below are some job postings for UXEs which might provide more insight into the role.

UX Engineering provided me with a gift; it allowed me to marry my love for design with the technical aspects of development. I love having the skills to communicate effectively with both designers and engineers.

If you think UXE is the right role for you, I encourage you to go for it; I have never been happier in a role.

Don't get discouraged if you can't find a multitude of UXE jobs; the field is still in its infancy and will continue to grow.

I am excited to see where this career path takes me.

Emma Bostian ✨
Software Engineer, bibliophile, & cat mom
5 Things You Need To Become A Senior Developer
#career
What's the kindest thing someone's ever done for you during your career?
#career #discuss
101 Tips For Being A Great Programmer (& Human)
#career