The impact of SAP on today's business is humungous, The world is witnessing its ease of supporting to one's business in various departments. Let's see the cool stats😮 about SAP.

But this is not possible in overnight, The vision🔭 of SAP is sparked among a group of 5 friends before 48 years from now (2020).

Dietmar Hopp, Hans-Werner Hector, Hasso Plattner, Klaus Tschira, and Claus Wellenreuther are former employees of IBM they noticed that all the companies are using similar business applications with minute varied requirements. So, They proposed to create standard business applications to eliminate reworks, errors-prone incidents, cost factor and to improve effectiveness. However, IBM didn't buy the idea and consequently, In 1972 they founded a company Systemanalyse und Programmentwicklung (System Analysis and Program Development) and later renamed it to Systeme, Anwendungen und Produkte in der Datenverarbeitung (Systems, Applications and Products in Data Processing) which is shortly called as SAP.

The first client for SAP is a German chemical company where SAP provides mainframes programs for payrolls and accounting programs. In 1972 SAP launched its first commercial system SAP R/1 which is a single-tier system and in 1979 SAP updated its business by launching SAP R/2 which is a two-tier system, R/2 was a great hit and bought fame for the company.

Adding boost to the SAP R/2, In 1992 SAP introduced SAP R/3 which is a Client-server architecture

They categorized the business into 3 layers

c. Database layer:
Database layer stores the data in the form of tables and supports R/W operations to application layer

On a success note, Client-Server architecture bought a lot of success and made many business companies to look at SAP.

Technical Modules: All the technical and coding related stuff will be developed by SAP ABAP and SAP BASIS.

Functional modules: All the functionalities in real-time business are carried out by 11 main modules. 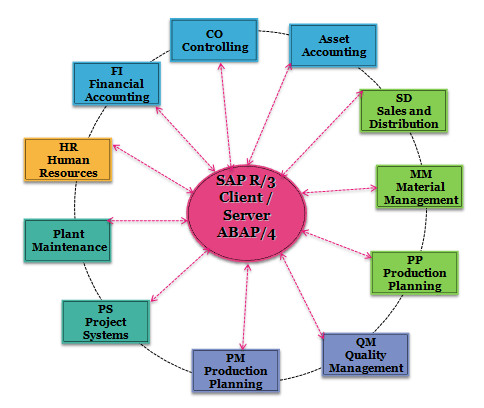 To have a glimpse😉 of SAP functional modules visit here

After the stable version of SAP R/3, SAP R/3 4.6c was the next version in R/3 class which includes Business plugins, Infructure addons.

Following 4.6c version, In the early 1990s due to the business movement to web application servers, SAP introduced one more version for R/3 class which is SAP R/3 4.7c and renamed the Basis module to Application web servers announcing that their latest support to application servers. This support is released via extension packs📦 instead of releasing a new next-generation ERP systems.

In 2003, SAP introduced MySAP ERP Edition which is a huge Business suite and its a combination of SAP R/3 Enterprise, SAP NetWeaver along with some additional components related to the business.

At the same time, SAP SE implemented J2EE engine thanks for its ability to develop web applications and platform-independence. Due to this availability of Java programming SAP-integrated many integration components like SAP CRM, SAP Enterprise Portal and SAP Exchange Infrastructure, and SAP grouped components like XI, BW, EP and KP and named it as SAP NetWeaver.

In 2005, MySAP ERP 2005 edition is introduced later changed to SAP ERP 6.0 (in 2006). SAP realized that even after grouping the individual components into NetWeaver it's not the way how the customers are using it up. Hence SAP Netweaver 2007 introduced Usage types for individual components. For instance, Before introducing usage types if we want to install XI lot of additional components should be installed but after, the XI usage type will spontaneously install every component.

Here is the big fish, SAP SE after years of working experience with their customers. Finally wants to boost up their computing time⏳, portability, simplified UI and dream of using their database(HANA) came up with S/4 HANA where S is a Simplified data model, 4 signifies the fourth generation (after R/2, R/3 and ERP) and HANA meant to be High-performance analytical appliance.

SAP HANA is an SAP application which uses Inbuilt memory(RAM) to compute a lot of real-time data with less than a second.

Instead of performing R/W operations from hard disk which consumes a lot of computing time (usually happens in legacy systems), HANA performs R/W operations in RAM itself completing the tasks (OLAP & OLTP) under a second.

It's a known fact, that data volumes💽 are rocketing throughout the years and migration to the cloud database is the best solution which is implemented by SAP.
It uses a structural database where the data is stored in rows and columns of the tables. However, the column data is shirked to a large extent thanks to the developed compression techniques to fetch data faster than the row data.

Although, Evolution of SAP underwent many versions it is the customer👔 satisfaction which bought SAP as a leading ERP systems provider. 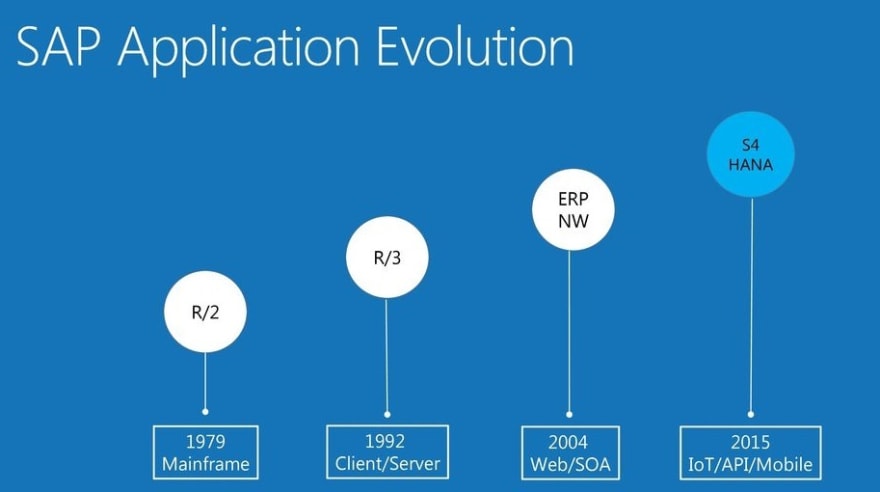 A software engineer😎 who loves to explore and expose the knowledge 📖.

We share thoughts about science and engineering in general. It includes Nature, human and Computers.
code of conduct - report abuse

How to survive (and thrive!) in software engineering interviews

Dark Mode 😎 in Chromium without any Extension 😎