I always had trouble understanding why the code quality is important, I would refuse to spend time on this. But recently I found myself in sticky situation over and over because of the quality. If the quality was good, then I would not have to spend million seconds thinking about the problem and structure. Thus I learned mocha, chai, browser automation libraries like puppeteer. But soon I had problems with the CI and code quality checking tools.

I had a very hard time figuring out how to integrate all these newly acquired knowledge into the projects at once.

It's like trying to build an whole app without writing the first line.

I would feel empty when I saw nice delicious badges on other repos and some repos had multiple green ones and my repos were almost empty, the code was undocumented and such newbie stuff.

Then it hit me, I could just create a sample repo from beginning with everything I want step by step and apply my knowledge there at very basic level so I can repeatedly use same process for other projects and relieve my stress over time. That's how this repo was born.

The result is awesome and I got to add some cool badges too just like others,

Ah! the joy when someone tell you the quality is good (be it just for some peace of mind).

A sample repo to show how mocha, puppeteer and a ci can be used to automate various tests. Maybe an automation script was created, but depending on the size of project even that script should be tested to make sure everything works as expected when there is a commit pushed.

We can build this using BDD, TDD or any other methodology, but whatever method is being used, the steps will always include,

Right now most CI and servers always prepares the Xvfb and other required libraries, so we don't have to deal with them too much unless explicitely required.

NOTE: This readme/post will avoid going into depth and only discuss matters on top, assuming you already know about nodejs, unit testing, mocha/chai, puppeteer and CI. You don't have to know everything, just having the basics will be enough.

PS: THE REPO IS HERE.

Yeah, why we are just making simple automation scripts?
Right now we are testing only a sample function. It doesn't seem much. However, imagine 100 scripts or thousand scripts. Is it possible for you to run and test every single script to make sure it works? It won't be possible, and it will become a very stupid headache once that happens. So, even if you don't need these kind of tests, they will help you on long run once you have to do same thing over and over again.

If you are building a scraper, and have to browse 100 sites or fill 100 forms, it will help when you got to know the script works and can reach the target website/forms when possible. It will also alert you when things goes south.

We will create a sample script that will browse example website, extract title and outerHTML and close itself. We will treat the script as an independent one, so we won't be dealing with the closing/opening the browser on the testing environment, rather it will just be there to show how it works.

We will use node 8 with async-await support, and puppeteer for this.

Basically what we will do is,

When using unit tests, it's important to use timeouts. Make sure to exit the tests, and use proper timeout. Recent mocha will not exit the tests, in that case or in a case where you have infinite timeout, you might end up with a huge cost for the test getting stuck. Mocha by default will run tests one by one. If you want to try asynchronous tests, you can use Ava. Both are fantastic in their own way, popular and has huge support.

You do not need to test every single thing on automation scripts. Just make sure the scripts works at very basic level for each possible scenerio. If you push 100 commits and the automation script has login and such, it will end up doing 100 logins in very short amount of time, and trigger various alerts, unless it's your website you are testing against.

We will create the test script with the actual user flow in mind. Check the test/basic.js for test code. The code is readable even without comments, (and I additionally added too much to the code just to get rid of all eslint errors.) 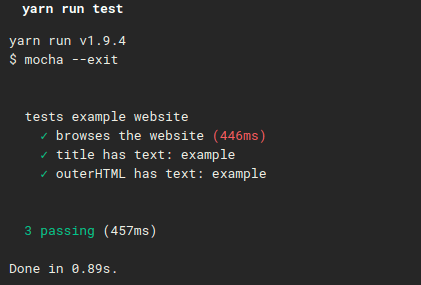 Sometimes you want to make sure the quality of the work is well and you are not pushing garbage inconsistent code to your repo. If you have multiple contributors to the repo you can even make sure their code passes all linting tests (excluding all eslint-disable hacks), and it returns safely.

Thus we are simply gonna use, eslint --init, and follow the wizard to install airbnb rules, then run using eslint .,

Also we can include these in the scripts inside package.json and simply call it later on.

Since we have mocha and node as target, we have to manually edit things a bit and add node and mocha as the target environment. Otherwise it will throw errors like, 'describe' is not defined.

And since we are using browser code inside puppeteer, it will throw errors like how document is not defined and such. We need to include browser as targets too, or apply workarounds.

We are all good once we put and lint it. It might throw on some small warnings about best practices, we can fix them if we want, or move on.

If not enough, we can use other code quality checking tools such as codacy. All we have to do is add the project and it will do everything else itself. It will clone project, detect programming languages, run various code patterns and calculate project metrics. Finally it will give us a project certification with a grade A to F, A being best, F being worst. The sample repo might get A at beginning, or an F. But if we are not careful enough, it will scream at us later on just like the other tools we are using.

Headless is a big factor on browsing and testing. Sometimes headless will leave a big footprint and get caught as bot, otherwise it's perfect for testing own websites where we can explicitly exclude it for testing.

Enabling headless will take 6+ seconds to launch on CI environment sometimes, while disabling headless will reduce the time to 1 second. It can be optimized and hacked thru. While this doesn't seem like a big deal, it is indeed a big deal if you have a tight budget and CI costs are really high. Most CI gives you free time to run, but it will quickly add up where you have almost limited resource.

Make sure to enable headless unless explicitly required.

CircleCI has node:8.12.0-browsers and other similar tags that includes the required libraries for headless and xvfb display. Just using their wizard is enough to get you going.

We will need to include the linting, and then we will run the actual test, make sure it's good quality code and works well, without running it ourselves on our own machine. We can even apply the fixing if we are brave enough.

Check out .circleci/config.yml for the code. The result looks beautiful, except it won't if all tests were ended in red. 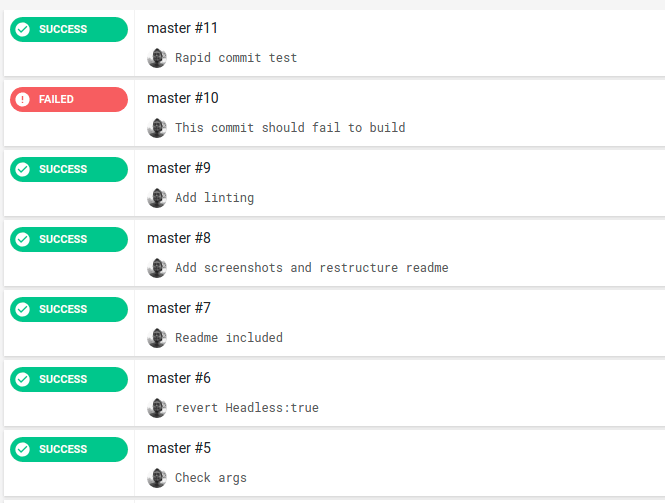 So far we almost copy pasted everything or followed wizard and everything was done. We just need to setup the actual project on circleCI and link the repo. Then push the repo will trigger the build.

That wasn't hard, was it?

It triggers on every commit

It will be very bad to trigger hundreds or thousands of tests on every commit/push. Sometimes you will just update the readme files and won't want to trigger things. And sometimes you will want to trigger only after making a major change. To prevent such worse things from happening, make sure to push to a separate branch and do pull request only if you are satisfied with current code changes. Merging to master branch will trigger the build, which also can be setup as various webhooks and breaking measurements.

So far this repo did not need such a big readme, but I ended up writing it because I was very lazy at writing documentations and ended up confused whenever I needed some script from some old repo to use.

Later I will be able to extend this repo with awesome things like,

Md. Abu Taher 👨‍💻
Full Stack Developer, focused on web automation, open source enthusiast and contributor. Passionate about programming, specializing in JavaScript.
Music Monday — What are you listening to? (Classic Rock Edition)
#watercooler #music #discuss
What are the coolest uses of AI you've seen in the last couple of weeks?
#discuss #ai
You're running an online conference but get called out for having an all-male speaker lineup 2 days prior. Yo, What do you do?
#discuss #serverless #aws

Once suspended, entrptaher will not be able to comment or publish posts until their suspension is removed.

Once unsuspended, entrptaher will be able to comment and publish posts again.

Once unpublished, all posts by entrptaher will become hidden and only accessible to themselves.

If entrptaher is not suspended, they can still re-publish their posts from their dashboard.

Once unpublished, this post will become invisible to the public and only accessible to Md. Abu Taher 👨‍💻.

Thanks for keeping DEV Community 👩‍💻👨‍💻 safe. Here is what you can do to flag entrptaher:

Unflagging entrptaher will restore default visibility to their posts.