Projects need a story for local development. With some projects, the development environment is cobbled together and evolves organically. With others, a dedicated team designs and manages the dev environments.

I've noticed a common theme in the ones I like. Good development environments make me confident that my code will work in prod while giving me fast feedback. These sorts of environments are fun to code in, since I can easily get into the flow — I don't have to stop coding to wait for my code to deploy, or wait until it's merged to do a "proper" test.

Recently, I've been thinking of test usefulness and test speed as the fundamental tradeoff in development environments. It's easy to build a robust testing environment that's slow to use. Or an environment that gives fast feedback, but forces you to test in a higher environment. The challenge is finding the right balance between the two.

In this post I'll explore why it's hard to have both, and what some companies have done about it.

Before focusing on development environments, let's take a look at deployment pipelines through the lens of test usefulness and test speed.

Most companies test code in a series of environments before deploying to production. In a well-designed deployment pipeline, you have high confidence that changes will work in prod once they reach the end of the pipeline.

In the ideal world, you'd be able to instantly tell, with 100% certainty, whether changes will work in production. 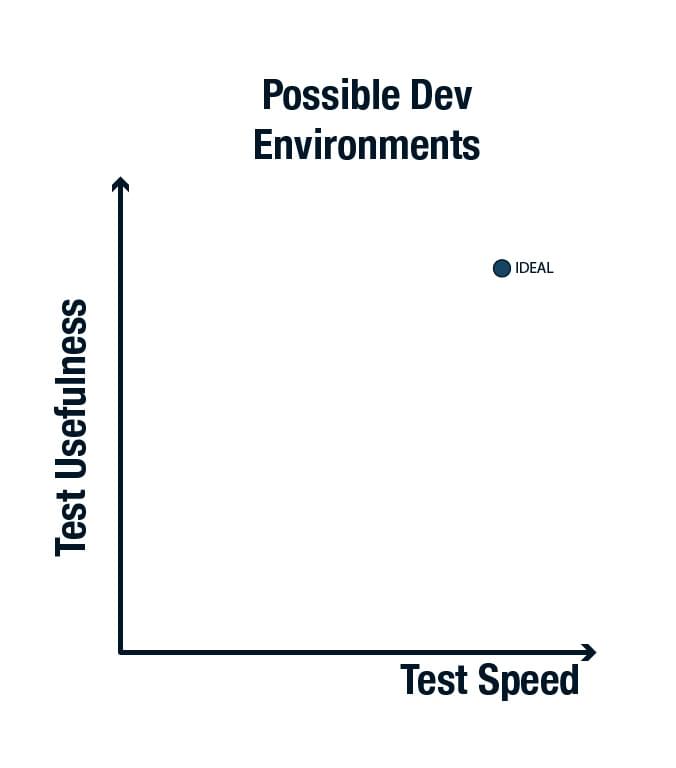 Staging environments are the last place changes are tested before going live in production. They mimic production as closely as possible so that you can be confident that a change will work in production if it works in staging. The similarities between staging and prod should go deeper than just what code is running — VM configuration, load balancing, test data, etc should be similar.

Staging environments live in the upper left of our "test usefulness vs speed" spectrum. They give you high confidence that your code will work in prod, but they're too difficult to do active development in. 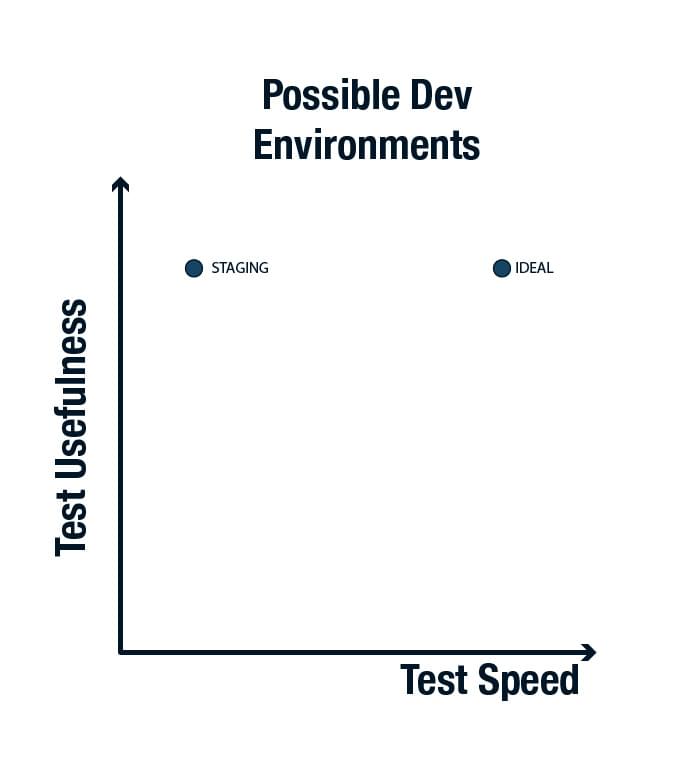 However, they hold a nugget of wisdom: the key to getting useful test results in development environments is to make them similar to production. For the rest of this post, I'll focus on dev-prod parity as a proxy for test usefulness since the former is easier to evaluate.

Let's dig a bit deeper into staging environments to see what we do (and don't) want to replicate in development environments.

How is staging similar to production?

Here are some common ways that staging environments match production.

The relative importance of these factors varies depending on the application and its architecture. But it's useful to keep in mind the factors that you deem important, because you may want your development environment to mimic production in the same way.

Why not just use staging for development?

Developing directly in the staging environment ruins the principle of having a final checkpoint before deploying to production, since it would be dirtied by in-progress code that's not ready to be released.

But putting that aside, developing via a staging environment is slow:

Development environments: a sea of tradeoffs

Development environments don't need to be perfect replicas of productions to be useful. Parity with production follows the Pareto principle: 20% of differences account for 80% of the errors. Plus, deployment pipelines provide a "safety net", since even if a bug slips through development, it'll get caught in staging.

This lets us cut some of the features of staging that decrease productivity during development. But what should we cut? 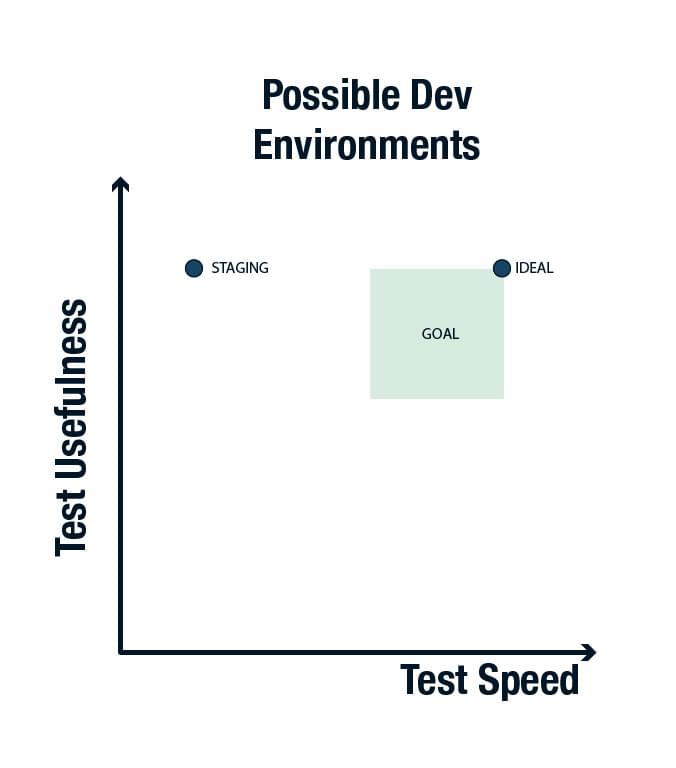 Here are some common compromises teams make, allowing them to operate in the ideal area.

Nothing breaks your flow like having to wait 10 minutes to see if your change
worked. By the time you're able to poke around and see that your change didn't work,
you've already forgotten what you were going to try next.

Docker containers are great since they let you deploy the exact same image that you tested with into production. However, they're slow to build since they don't handle incremental changes very well. Doing a full image build to test code changes wastes a lot of time.

Docker volumes let you sync files into containers without restarting them. This, combined with hot reloading code, can get preview times for code changes down to seconds.

The downside is that this workflow doesn't let you test other changes to your service. For example, if you change your package.json, your image won't get rebuilt to install the new dependencies.

Solution: Have a separate development environment per developer

It's tempting to share resources in development so that there's less to maintain, and less drift between developers. But the potential for developers to step on each other's toes and block each other outweighs the conveniences, in my opinion.

The most common thing that drifts when using isolated environments is service versions. If your development environment boots dependencies via a floating tag, images can get stale without developers realizing it. One solution is to use shared versions of services that don't change often (e.g. a login service).

Previewing code changes is only one part of the core development loop. If the
changes don't work, you debug by getting logs, starting a debugger,
and generally poking around. Too many layers of abstraction between the
developer and their code make this difficult.

Even if you use Kubernetes in production, you don't have to use Kubernetes in development. Docker Compose is a common alternative that's more developer-friendly since it just starts the containers on the local Docker daemon. Developers boot their dependencies with docker-compose up and get debugging information through commands like docker logs.

However, this may not work for applications that make assumptions about the infrastructure setup. For example, applications that rely on Kubernetes operators or a service mesh may require those services to run in development as well.

In traditional monolithic development, many developers run their code directly
from their integrated development environment (IDE). This is nice because IDEs have integrations with tools such as
step-by-step debuggers and version control.

The downside of this approach is that your service is running in a
substantially different environment, the networking is complicated, and
versions of dependencies like shared libraries tend to drift.

Sometimes, you're forced to make compromises because it's just too hard to build the
perfect development environment. Unfortunately, most companies need to invest
in building custom tooling to solve the following problems.

Development environments are usually an afterthought compared to staging and
production. They evolve haphazardly based on band-aid fixes. But developers
spend the bulk of their time in development, so I think they should be
designed consciously by making tradeoffs between test usefulness
and test speed.

What does your ideal development environment look like? What tradeoffs does it make?

Why Eventbrite runs a 700 node Kube cluster just for development

Why SREs should be responsible for development environments

COLDCODEWAR ON: I asked Chatgpt straight question about its affect on humans ,students & developers . Here is it's answer.

Once suspended, ethanjjackson will not be able to comment or publish posts until their suspension is removed.

Once unsuspended, ethanjjackson will be able to comment and publish posts again.

Once unpublished, all posts by ethanjjackson will become hidden and only accessible to themselves.

If ethanjjackson is not suspended, they can still re-publish their posts from their dashboard.

Once unpublished, this post will become invisible to the public and only accessible to Ethan J. Jackson.

Thanks for keeping DEV Community 👩‍💻👨‍💻 safe. Here is what you can do to flag ethanjjackson:

Unflagging ethanjjackson will restore default visibility to their posts.