When it comes to manage your widgets visibility in Flutter, you have many options. Flutter provides us with some cool widgets for this purpose. Let's look at them :)

Let's say you want to hide the following widget.

This widget simply sets the child's opacity to zero but still renders it. So the child is hidden but takes space and you can interact with it.

Offstage renders the child widget off set the screen. This means that the widget is not rendered in the subtree and so doesn't take any space.

Here the child widget is not rendered in the subtree, and Flutter uses instead a shrinked sized box to replace it. The result is pretty much the same as with Offstage.

Use whatever you want as per as your needs.

The image below summarizes all. 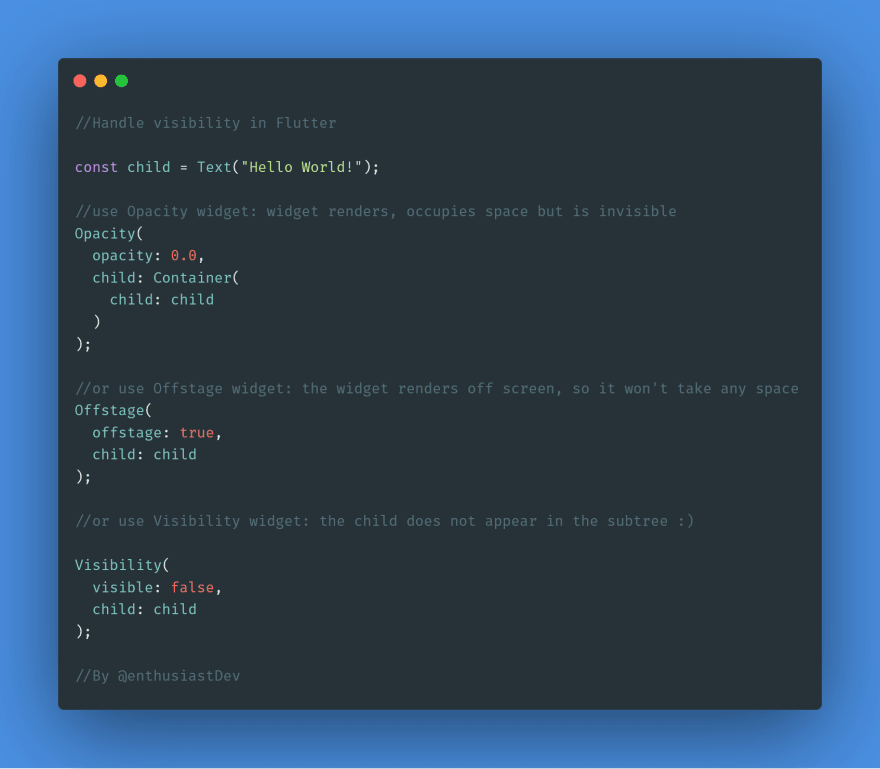 Hi! I'm a young and enthusiast web and mobile developer. I like working with Flutter, Kotlin for my mobile apps, and Vue, Adonis, Laravel for my cool apps.

From A mechatronics engineer to a software developer

Ethiel ADIASSA
@ethiel97
Hi! I'm a young and enthusiast web and mobile developer. I like working with Flutter, Kotlin for my mobile apps, and Vue, Adonis, Laravel for my cool apps.
joined
May 16, 2018
More from @ethiel97
Smooth transition with text styles in Flutter
#flutter #dart

Trending on DEV
Need advice on what to learn in 2020
#beginners #career
Share your WFH setup!
#discuss #workstations
How much time should you spend looking something up before asking a question?
#discuss #productivity
New things you've started since the outbreak
#watercooler #discuss
Are you coding more in your spare time due to COVID—19?
#discuss #watercooler
State of Rust Web Frameworks (Server, DB)
#rust #webdev #discuss
Why did you Decide to Learn Programming?
#discuss #webdev #beginners #codenewbie
What is your favourite operating system?
#discuss #watercooler #mjasks