If some old timers are here, they can remember REE–Ruby Enterprise Edition–from ancient times of Ruby 1.8.7 and Ruby on Rails 2.2 (almost ten years ago!). Ah, good ol’ times! You could install it via RVM or Rbenv, and some legacy applications are still running on it or have been just recently migrated. REE has a dozen of different patches on top of Ruby 1.8.7 to improve performance, reduce memory consumption, adjust obsolete security settings, and so on.

In MRI 1.9.x most of these problems were solved, and, as it gained adoption, REE became obsolete. But even modern “vanilla” MRI still has quirks that can be fixed relatively easy. The most annoying of them is memory bloat due to memory fragmentation.

So it is not at all surprising that Hongli Lai, the creator of REE, have released Fullstaq Ruby.

Why do we need it?

At one of our projects at Evil Martians we were experiencing severe memory bloat. Our application does a lot of IO, and we have a lot of Sidekiq processes with high concurrency setting (20 threads per process). This setting is optimal from the performance point of view because workers are mostly making requests to different remote APIs, our own database, and caches. But such a high level of concurrency also leads to high memory fragmentation. Our Sidekiq processes eat several gigabytes of RAM each.

Read more about choosing Sidekiq concurrency setting in the Sidekiq in Practice part 1 by Nate Berkopec.

We have decided to replace our MRI 2.6.3 to Fullstaq Ruby 2.6.3 with jemalloc to see how it will perform.

We tried Fullstaq Ruby on a commercial application that runs in production and serves requests from paying clients around the clock.

First of all: nothing broke. Zero downtime!

Now, take a look at these monitoring graphs. Memory bloat of long-running processes has practically gone!

The graphs above prove that memory fragmentation was the reason for high memory consumption.

And that’s it—quite an improvement for swapping one ruby binary for another, isn’t it?

If jemalloc isn't an option for you or you cannot afford to replace MRI with something else, you can try MALLOC_ARENA_MAX=2 spell to adjust MRI's standard glibc malloc behavior. Results will be close enough to Fullstaq Ruby to treat them almost as equal.

In our case, Ruby with limited number of malloc arenas (on the right) consumed about 50-100 MB more memory than Ruby with jemalloc (on the left).

Read more and see benchmarks of MALLOC_ARENA_MAX=2 in this post: 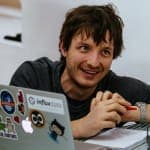 Cables vs. malloc_trim, or yet another Ruby memory usage benchmark

We decided to stick with Fullstaq Ruby.

At the moment the only way to install Fullstaq Ruby is to use deb or rpm packages (either installing directly or via repositories). But we deploy our app to Kubernetes cluster, so we need a Docker image. As there is no "container edition" available on the official website yet, so let’s build our own image–actually, it is not that hard!

Let's use Debian 9, as this is the Linux distribution being used by official Ruby Docker image, and define the Ruby version:

And then install prerequisites, add Fullstaq Ruby APT repository, install Ruby itself and cleanup apt caches—all in a single command to reduce the Docker layer size:

Fullstaq Ruby also installs Rbenv as dependency but we don't need it in Docker, so let's add ruby and gems binaries to system $PATH in the same way that official Docker image for Ruby does:

We’ve already built and published this image. You can pull it from our repository at quay.io:

Dockerfiles are available on GitHub: https://github.com/evilmartians/fullstaq-ruby-docker

Now we can just replace base image in our application Dockerfile:

And deploy it to staging and then to production.

Feel free to do the same!

Once suspended, evilmartians will not be able to comment or publish posts until their suspension is removed.

Once unsuspended, evilmartians will be able to comment and publish posts again.

Once unpublished, all posts by evilmartians will become hidden and only accessible to themselves.

If evilmartians is not suspended, they can still re-publish their posts from their dashboard.

Once unpublished, this post will become invisible to the public and only accessible to Andrey Novikov.

Thanks for keeping DEV Community safe. Here is what you can do to flag evilmartians:

Unflagging evilmartians will restore default visibility to their posts.