Got a new job or in your current one they are planning to implement Git-Flow and you don't know what the fuss is all about?

You've come to the right place. In this post I'll break it down for you, however, if you already know it and just want to tinker around with it, you can just skip to the tutorial.

In a few words, Git is a version control system, an essential tool to handle the life cycle of the development of an application.

So far so good, classic Git, but problems start showing up when handling teamwork: you and your team might decide to just work on the main branch of the project and create some secondary branches on special occasions, but what happens when there is a lot of work or several people must work in the same function at the same time?

When working as a team, it is necessary to define conventions or good practices so that everyone knows how to work together. Git-Flow is one of many so-called workflows, quite popular for its practicality and relatively quick learning, it is a way to organize the branches of the project repository.

You have probably already seen this image or a similar one when searching the term Git-Flow on the Internet: 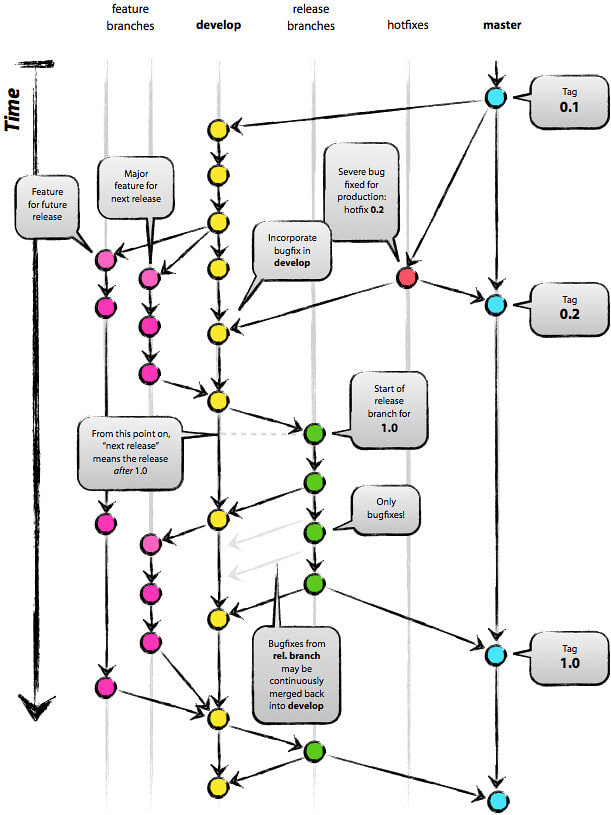 A picture is worth a thousand words, or in this case a couple thousand more

It seems and is complicated at first glance, but when you know the different branches used and the reason for their existence, you will see that the handling is quite logical.

As we saw in the image, Git-Flow uses several branches to organize the development:

If you have used Git before, you will be familiar with the master branch. In this new context, this branch is "untouchable", no one from the team should make any changes directly to it, nor create new branches from it, with one exception that we will review later.

When creating a new project, or when starting to use Git-Flow, the develop branch must be created frommaster, and like master, it will be a "long-lived branch", that is, it will never be deleted and will be parallel to master.

As its name implies, the develop branch serves as the basis for working on all new project features and fixes, which is why it is considered the main branch.

Once all the new project functions & bugfixes have been completed and develop is on a rather 'stable' state, we should merge develop in master.

The master branch should always reflect an 'production' state, so it is important that we do not make changes directly to it, since every time there is a new commit, we should tag it to define the new version and publish it. In this context the master branch is sometimes referred to as the 'integration' branch.

The feature branches are those that we dedicate completely to the development of each of the new planned functions to be added to the project in the next version. They come always from develop and we must merge 'em back to develop.

Following Git-Flow best practices, when creating a new feature branch, we must always add the prefix feature/, in this way we can maintain a good organization and just by looking at the active branches we can quickly identify the work in progress.

At the same time, it is important to name the feature branches in a descriptive way to identify the purpose of the branch:

The important thing about feature branches is that they only live during development and that they should disappear once we have done the merge in develop or that they are discarded if the function is no longer necessary.

NOTE: the prefix feature/* is the default, but if you or your team deem it necessary, you can adapt the prefix to anything else, for example function/*

The release branch is used to regroup the functionalities and corrections made, to prepare for the release of the version in development. This branch starts from develop and must be merged in both develop and master.

The perfect time to create a release branch is when the develop branch looks as much as possible to what we want to have in production, it provides then a moment to make last minute corrections that we may have forgotten, or to make changes of the project that do not necessarily need a whole branch to be carried out, for example to increase the version number.

Following Git-Flow, release branches also have a prefix, release/* or release-*, usually followed by the version number or name they represent, for example: release/1.2.0 or release/5.0 or release/1.0.0-rc.1+build.123.

The advantage of having a release branch is that work can continue in develop and we can create other new feature branches, since the planned work is already in the release one and will not have major changes.

The hotfix branches come from master and must be merged back in master and develop. They are used to make quick or critical corrections to the project, in order to publish a new version as soon as possible.

NOTE: If you create a hotfix branch but there is already a release branch, instead of doing the merge in develop, it must be merged in master and release instead.

In other words, we can use the bugfixes to make minor bug fixes that can wait for the release of the development version, while the hotfixes cannot wait and should be published as soon as the development has been approved.

For this tutorial and in order to simplify it, I will use the Git-Flow console plugin of Peter van der Does, but you can also see the equivalent classic Git commands to Git-Flow commands.

For the next article, we will talk about other strategies, but if you want to learn more about Git-Flow at the moment, here are some sources that I used for this article.

ChatGPT is Amazing. And It is FREE

Once suspended, fernando_ayon will not be able to comment or publish posts until their suspension is removed.

Once unsuspended, fernando_ayon will be able to comment and publish posts again.

Once unpublished, all posts by fernando_ayon will become hidden and only accessible to themselves.

If fernando_ayon is not suspended, they can still re-publish their posts from their dashboard.

Once unpublished, this post will become invisible to the public and only accessible to Fernando Ayon.

Thanks for keeping DEV Community 👩‍💻👨‍💻 safe. Here is what you can do to flag fernando_ayon:

Unflagging fernando_ayon will restore default visibility to their posts.