What is React Navbar?

Navbar is an often unsung hero of a site. A trustworthy companion that provides you with the tools and links on a site to lighten your browsing and navigation in a swirling sea of the World Wide Web. Shortly speaking, a React Navbar is a navigation bar component that is created on ReactJS. In broad terms, a React Navbar is a useful tool to gradually improve your project if used correctly.

Navigation bars made on React and Bootstrap basis are indeed versatile and leave quite room for imagination in the sphere of design and functionality solutions. That’s a point that we would be glad to confirm in this article. But, unfortunately, it should also be said that there is no ideal in this world, so we would also be discussing some problematic points of making React and Bootstrap Navbars for your consideration.

That’s why we’ve decided to share with you our viewpoint on it, tell you about a couple of Open Source React Navbars you can implement on your project and also tell you about possible pitfalls to avoid. So, without further ado, let’s start.

Yusinto Ngadiman has created a slick and stylish React Navbar, inspired by a navbar on Stripe’s site; his own vision of the matter, if you might say so. Stripe’s site navbar is fully animated, stylized by components and css animations and contains neat small icons according to each navigation point of the site. react-site-nav has all the same features with a small correction of unified style (also, you are, as usual, free to experiment around it and create your own version of this navbar). The only downside as of now is the absence of a version, customized for mobiles. But the creator has promised to also deliver on that point some time in the future.

If global trends are anything to go by, then it should be noted that nowadays “nice and simple” is the name of the game, as more and more international brands simplify themselves to be closer to their audiences. That’s why we suggest you keep in mind react-responsive-navbar that says a stern and decisive “No, thanks, maybe some other time” to all the possible flashiness and goes for substance over style. Simplicity, straightforwardness, complete customizability – those are the defining traits of this navbar.

This one is a React 16.5.2-based template, which implies the wide usage on the web and means you get not only a navigation bar, but a full package for your site that is quite useful for analytics building and data tables application. Also, it should be added that One React provides a static inner-page side navbar for each table, making it easy to sort the wheat from the chaff. As for the design, this template is made in a classic three colors pattern: white, grey and orange beautifly intertwining to create a complete composition. Feel free to give this one a thorough look and you’ll, no doubt, fall in love with its usability and finesse. 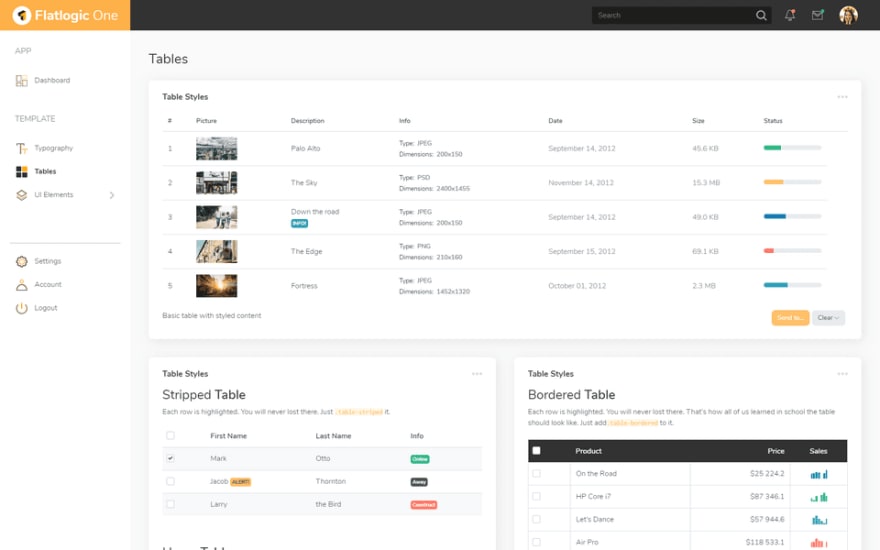 One of the best things about this navbar is how responsive it really is, as it automatically adapts to the needed size of the page without any additional inner tinkering. The other mind note to make is the simplicity and style connection this navigation bar oozes by having a minimalist sleek black design in its standard form. The colour can be changed, although, so, if you are not a fan of dark tones or your site simply needs a brighter colour, it can be easily changed.

Once again on this list, the entree is not just a navbar, but a full-blown ready-to-use dashboard template. The peculiar thing about Light Blue React is the fact that the navbar in it is situated on the left, rather than on the top of the page, which will give your site a fresh spin and differentiates it from the majority of the sites. This twist to the standard formula also has a functional meaning, as it allows your navigation bar to demonstrate and provide shortcuts to more sections of the site without creating supplementary subsections inside the navbar. Additionally it must be said that the overall design of Light Blue React is something to feast your eyes upon, as it is the first ever Bootstrap 4 and React-built transparent dashboard template. It’s a must-try for your project for sure. 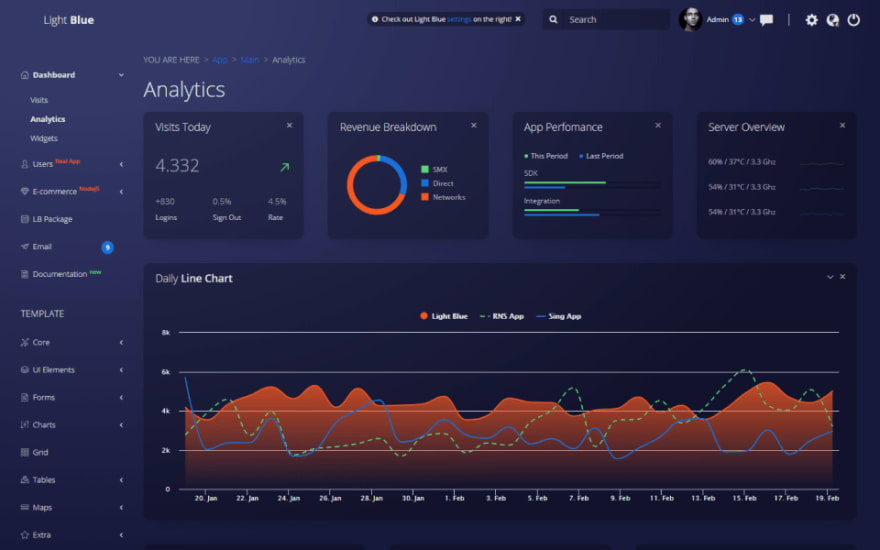 This navbar is based on a simple premise that would be most useful for one page sites – as you scroll through the site and go between sections within the page, the navigation bar demonstrates what section of the site you are currently on. Nice idea and smooth actual implementation, but there is a catch. First of all, this navigation bar currently has no maintenance, which means that it is not quite suitable for professional sites and would be more fitting for passion projects. Second of all, this navbar is not suitable for mobile versions of the sites if there are one too many sections. But it is a beauty of a component that just takes a pinch of work and imagination to work properly. So, if you are not afraid to give it a little bit of your time to dig around the code, React Scrolling NavBar is something to consider.

We close this little list with something you can call a classic. This navigation bar has no tricks up its sleeves, it’s simple and straightforward. As they say, sometimes the worst thing to do is to overthink. So, this entree is most fitting for those sites that try not to overcomplicate things, as the most complex aspect of it is the existence of a drop-down menus within. Nothing more, nothing less.

Now, as we promised earlier, let’s discuss the not-so-great parts of the whole React Navbars.

And, to be quite honest, we couldn’t find that many: React Navbars are quite reliable and, as an old saying goes: “Don’t reinvent the wheel”. But nonetheless,​ you might want to consider the fact that nowadays navbars could be reviewed as quite rudimentary on a number of sites and apps.

The reason for that is, in all actuality, the steady rise of mobile internet usage and the fact that phones are getting bigger and bigger screens. This issue is quite prevalent on iPhones and other flagman phones. As navbars are traditionally placed in the upper part of the page an ordinary user simply cannot reach it with his thumb, thus rendering navbar pointless and space-consuming. But there are a couple more cons and pitfalls and quite nitpicky at that (also still something to consider, as UI should also consider small annoyances):

Also, keeping in mind all the upper-mentioned information, also consider the fact that navigation bars as a whole are mostly a desktop site’s feature in their standard understanding. But the general versatility of React Navbars also allows for endless variations and modifications of the tried and tested formulas and the best thing you can do when pondering the actual necessity of a navigation bar in your project can be formulated in simple questions:

By answering these questions you will be able to understand your own site in a deeper way, as the understanding of the end user is one of the most important things in front-end development. It might also help you start considering other parts of your project from such a perspective and make your site much closer to perfection than it could have been. So, in a way, React Navbars are not only a useful tool, but are kind of a philosophical viewpoint of your own work.

Thanks for reading this article, and be sure to stay and read more useful and interesting pieces in our blog. See you next time!

At Flatlogic, we help businesses to speed up web development with our beautifully designed web & mobile application templates built with React, Vue, Angular, React Native, and Bootstrap. During the last several years we have successfully delivered more than 100 custom dashboards and data management solutions to various clients starting from innovative startups to established and respected enterprises.

Flatlogic
The easiest way to start a web app

Once suspended, flatlogic will not be able to comment or publish posts until their suspension is removed.

Once unsuspended, flatlogic will be able to comment and publish posts again.

Once unpublished, all posts by flatlogic will become hidden and only accessible to themselves.

If flatlogic is not suspended, they can still re-publish their posts from their dashboard.

Thanks for keeping DEV Community safe. Here is what you can do to flag flatlogic:

Unflagging flatlogic will restore default visibility to their posts.