In a previous post I wrote a summary of the things I learned about gRPC. Here I will talk about the prototype app I wrote to test gRPC and gRPC-Web.

As I mentioned before,I wrote a prototype app that tests if the string that the user typed in the browser is a palindrome. I started my experiment based on the example from the official gRPC guide for Python and what that service does is to say hello: when the client runs, it sends a Hello request to the server who in turns responds back with a Hello. In that example, both the server and the client are Python implementations but I wanted to see if that would work in the browser so I started changing it to be a Python server and a JS client. Spoiler alert: it does!

The messages structure is defined below.

And that’s basically it for the .proto file.

Next, I used protoc to compile the protobufs to be used by my Python server and my JS client – and here is one other advantage of using proto buffer and gRPC: you write your definition once and use a command line tool to generate the classes for multiple languages. If your target language is supported by gRPC, one command will take care of that for you, no need to rewrite that library yourself.

So, for example, this is what the command looks like for python (side note here: you must have gRPC and gRPC tools installed in your system to use these tools.):

The parameters will vary slightly depending on the target language you need. The output of this command will be two pb files for each target language you run the compiler: one file with the gRPC classes for the service and one for the messages. These files should not be edited. We will not look into these now but you can refer to my repo or the documentation to see what these files look like.

Using the generated classes in the implementation

Now the fun part: we can use these generated protbufs classes, the pb files, in our implementation. This is what part of my Python server code looks like – the full server code is here:

– import gRPC and the pb files

– Create the service class and its methods

In the other part of this script I create and run the server method. Here I added a couple of things for convenience since I am running this all on Docker: I wanted to be able to run separate containers for the client and for the server, so I added the IP check. You will notice that the grpc server runs on a “insecure port”. That’s for development mode only and all the examples I found use this insecure port so for production some more research needs to be done.

That’s basically it for the server part.

My client is in JavaScript so I had to compile the gRPC classes again (using protoc), this time for JS so I can import them in my code. Here’s the code:

I’m using vanilla JS and this is a very simple code –the index.html file can be found here (also very simple). I imported the pb files, created an instance of the client and of the request and I also added an input field and buttons with event listeners attached so I can trigger the request and output the response in the browser (and some good ol’ console logs for debugging ![’](https://s1.wp.com/wp-content/mu-plugins/wpcom-smileys/blush.svg) ).

This is what it looks like in the browser: 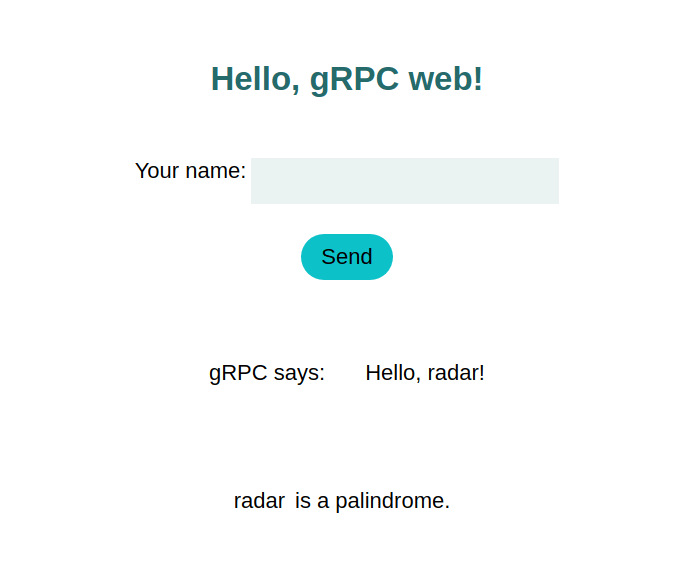 This app is on Docker so it’s super easy to run and test locally: just clone my repo and run docker-compose up -d on the project folder (full instructions here).

This was a really interesting project to work on. It required a bit of a mind shift from using REST to gRPC: you don’t think about manipulating the resources anymore but think about results that need to be accomplished instead.

It was quite simple to get started: install the dependencies, write the service definition (the proto file) and off you go to write the implementation. The the command line tool will generate classes for any language you would like to implement on. Personally I think this alone is a great advantage as it doesn’t force whole teams to use the same language; in a world of microservices, each team can choose the tools and languages they prefer and generate the classes for the language they will use.

I’m curious to see if gRPC will become more popular in the years to come.

The post Getting started with gRPC – part II: the code was originally published at flaviabastos.ca

Code-splitting in React WITHOUT Suspense: useLazyLoad

Once suspended, flaviabastos will not be able to comment or publish posts until their suspension is removed.

Once unsuspended, flaviabastos will be able to comment and publish posts again.

Once unpublished, all posts by flaviabastos will become hidden and only accessible to themselves.

If flaviabastos is not suspended, they can still re-publish their posts from their dashboard.

Once unpublished, this post will become invisible to the public and only accessible to Flávia Bastos.

Thanks for keeping DEV Community safe. Here is what you can do to flag flaviabastos:

Unflagging flaviabastos will restore default visibility to their posts.