The Event Loop is one of the most important aspects to understand about Node.

Why is this so important? Because it explains how Node can be asynchronous and have non-blocking I/O, and so it explains basically the "killer app" of Node, the thing that made is this successful.

The Node.js JavaScript code runs on a single thread. There is just one thing happening at a time.

This is a limitation that's actually very helpful, as it simplifies a lot how you program without worrying about concurrency issues.

You just need to pay attention to how you write your code, and avoid anything that could block the thread, like synchronous network calls or infinite loops.

In general, in most browsers there is an event loop for every browser tab, to make every process isolated and avoid a web page with infinite loops or heavy processing to block your entire browser.

The environment manages multiple concurrent event loops, to handle API calls for example. Web Workers run in their own event loop as well.

You mainly need to be concerned that your code will run on a single event loop, and write code with this thing in mind to avoid blocking it.

Almost all the I/O primitives in JavaScript are non-blocking. Network requests, filesystem operations, and so on. Being blocking is the exception, and this is why JavaScript is based so much on callbacks, and more recently on promises and async/await.

The call stack is a LIFO queue (Last In, First Out).

The event loop continuously checks the call stack to see if there's any function that needs to run.

While doing so, it adds any function call it finds to the call stack, and executes each one in order.

You know the error stack trace you might be familiar with, in the debugger or in the browser console? The browser looks up the function names in the call stack to inform you which function originates the current call: 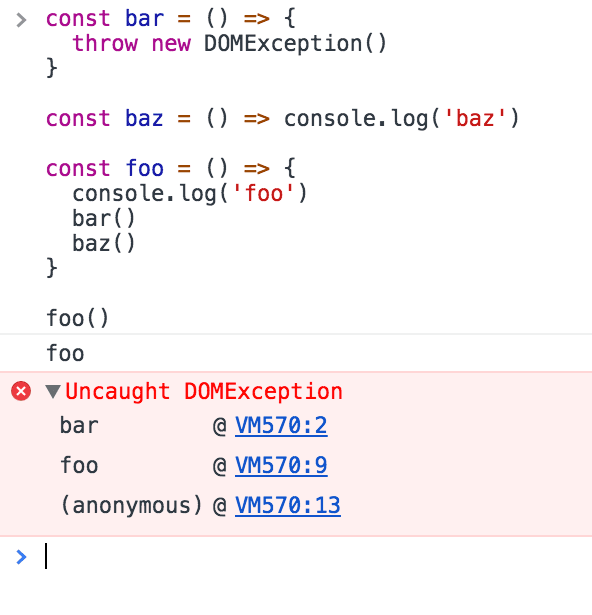 When this code runs, first foo() is called. Inside foo() we first call bar(), then we call baz().

At this point the call stack looks like this: 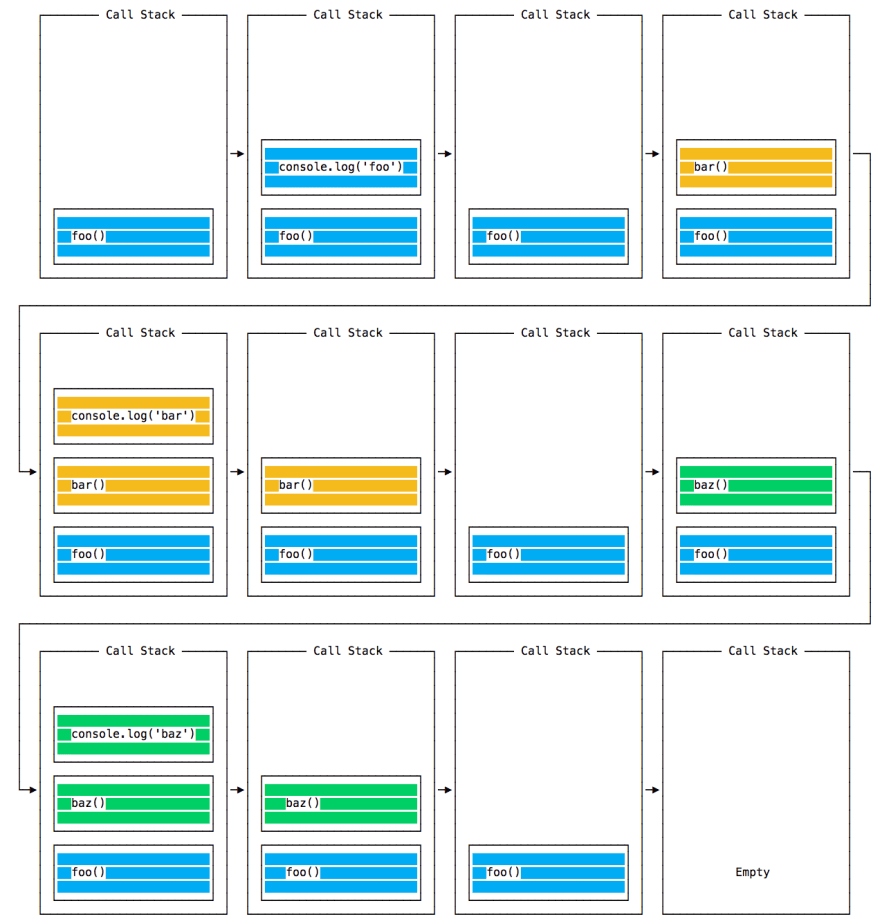 The event loop on every iteration looks if there's something in the call stack, and executes it: 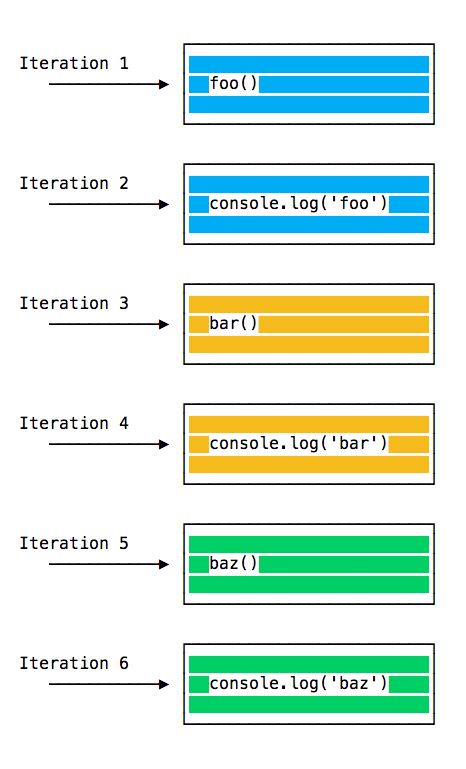 until the call stack is empty.

The above example looks normal, there's nothing special about it: JavaScript finds things to execute, runs them in order.

Let's see how to defer a function until the stack is clear.

The use case of setTimeout(() => {}), 0) is to call a function, but execute it once every other function in the code has executed.

When this code runs, first foo() is called. Inside foo() we first call setTimeout, passing bar as an argument, and we instruct it to run immediately as fast as it can, passing 0 as the timer. Then we call baz().

At this point the call stack looks like this: 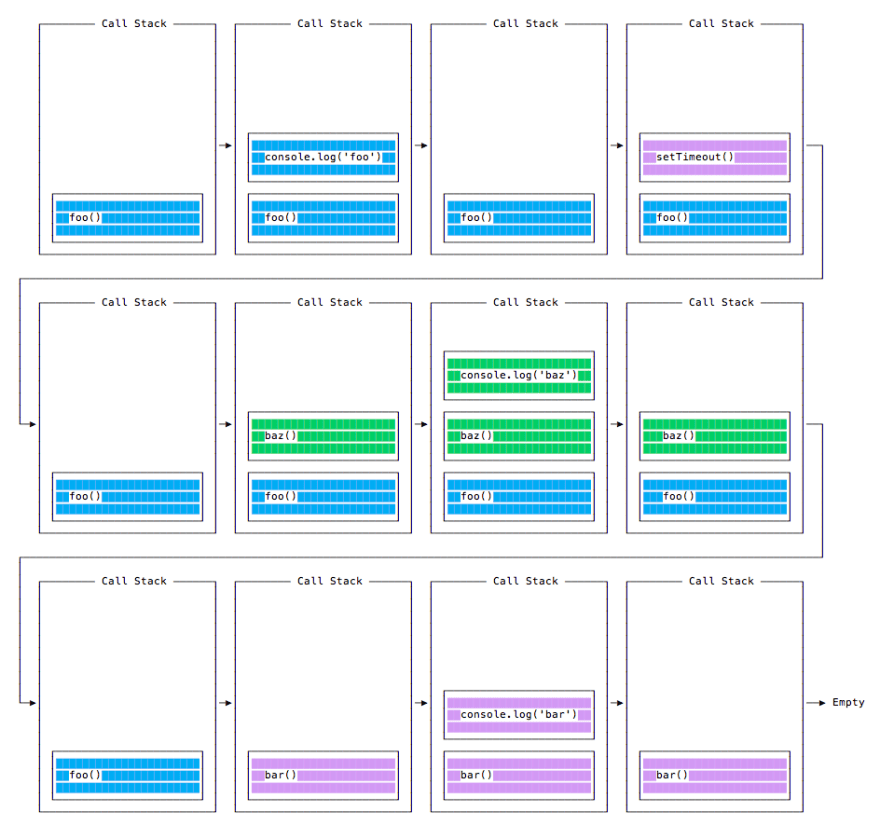 Here is the execution order for all the functions in our program: 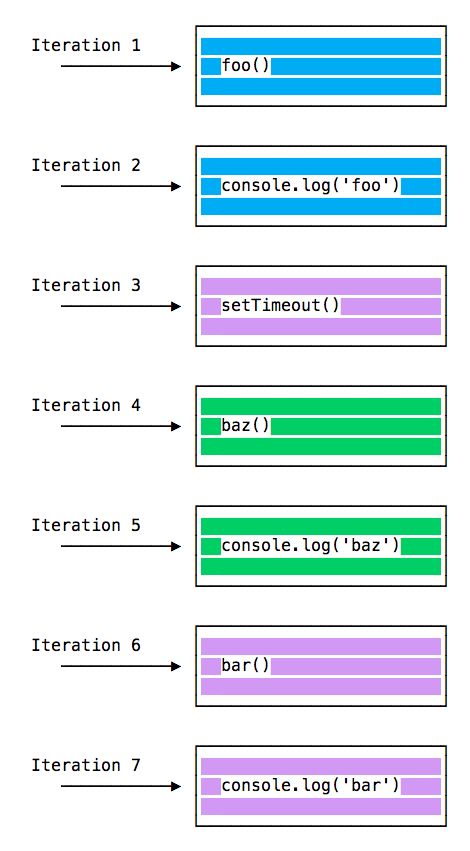 Why is this happening?

When setTimeout() is called, the Browser or Node.js start the timer. Once the timer expires, in this case immediately as we put 0 as the timeout, the callback function is put in the Message Queue.

The Message Queue is also where user-initiated events like click or keyboard events, or fetch responses are queued before your code has the opportunity to react to them. Or also DOM events like onLoad.

ECMAScript 2015 introduced the concept of the Job Queue, which is used by Promises (also introduced in ES6/ES2015). It's a way to execute the result of an async function as soon as possible, rather than being put at the end of the call stack.

I find nice the analogy of a rollercoaster ride at an amusement park: the message queue puts you back in queue with after all the other people in queue, while the job queue is the fastpass ticket that lets you take another ride right after you finished the previous one.

That's a big difference between Promises (and Async/await, which is built on promises) and plain old asynchronous functions through setTimeout() or other platform APIs.

The Power of Memento Design Pattern in JavaScript