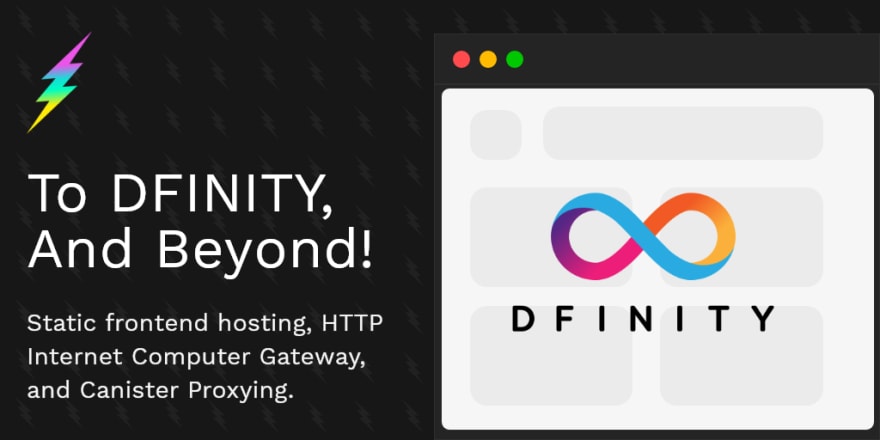 Major day for Fleek doesn’t begin to even cover it. Today, at a virtual event titled “Exploring Entrepreneurship in the Open Internet Boom” hosted by the DFINITY Foundation in partnership with Techcrunch, we are revealing that we are joining the Internet Computer ecosystem in full force and going live on the Internet Computer!

It’s a special release day — we have a series of new Internet Computer specific features coming out onto the Fleek platform, like Static Front-end Hosting!

But we are also sharing our path forward on the Internet Computer, and into our idea of building a truly trustless, decentralized, and permissionless version of our Open Web services (e.g., hosting, storage, etc.) using Internet Computer canisters!

Buckle up, because when we say “To DFINITY and Beyond” we mean it. 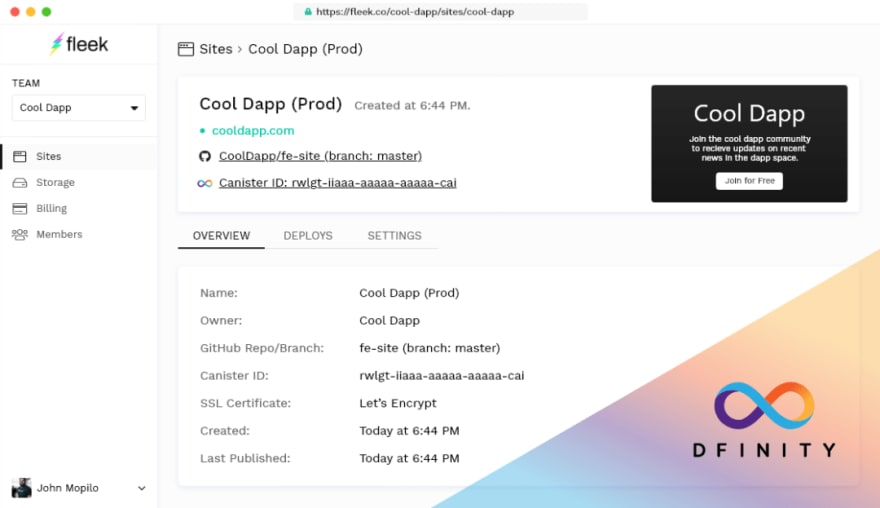 As of this moment, you can take your static front-ends and host them on the Internet Computer with Fleek! In just a couple of clicks, you can move your site further into Web 3.0 by hosting it on a computational blockchain network growing to become the trustless base layer of the new web.

It’s as easy as it is to host any static site on IPFS with Fleek. You just need to:

That is all there is to it. Fleek abstracts the entire process for you. Canister creation, content updates, resolving, cycle management (though right now cycles are free-use on Mainnet, until they are fully implemented).

You can build static frontends, which means either static websites as we mentioned, or Dapps or front-end apps that don’t require a back-end infrastructure and leverage instead APIs from the FE to implement services/features!

It's important to note that this is an Alpha product, which we are launching and building on top of the Internet Computer's Alpha/Testnet. It is an experimental and early version that will help anyone test and build sites, apps or Dapps on the Internet Computer in preparation for the Mainnet Beta genesis!

Now's the time to test, experiment, and get your hands dirty building on the IC.

A minor limitation of this stage, for example, is a per-file size limit of 2MB, and a site/app total (for the entirety of the Canister) of about 2.5GB. This won't signify much on most static projects, but some media files (video/gifs/images) might be affected.

We'll progress the product as the Internet Computer progresses with the Mainnet, and once we reach the Mainnet's Beta, we will do a migration/redeployment of all sites to the Mainnet after Genesis arrives.

How Does Fleek Achieve Frontend Hosting on the Internet Computer?

The process in the background is straightforward. When you connect your repository to Fleek, and make a deployment, Fleek uses the DFINITY SDK (view documentation) to create a front-end Canister on mainnet, and build and deploy your website’s code to it.

Right now, we do front-end canisters only (thus, static sites), but in the future we will allow for back-end as well.

Then, the continuous deployment process begins! With your canister up and running, upon any pushed changes to your linked repository’s branch, Fleek will use the DFINITY SDK again to make Canister calls and update your website’s content reflecting changes immediately. This means you get all the usual perks, but with your site on the Internet Computer:

All these are considered, in many ways, Web 2.0 elements that act as a bridge between the now evolving Web 3.0. As resolving becomes native to more devices and platforms (like browsers, or native apps and Dapps), each will be replaced by its Web 3.0 alternative.

Domain Management and Resolving on the Internet Computer 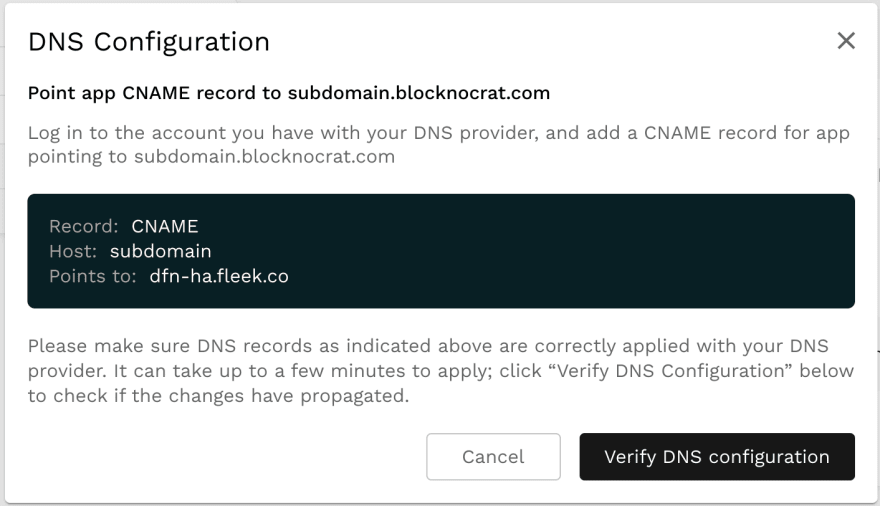 Simply specify your custom domain, click verify DNS configuration, and add the appropriate record to your domain’s CNAME (instructions might vary according to your provider). Once all is set and done, you can click verify again (wait a couple minutes until it propagates) and your site will be up and running on your own custom domain.

What about blockchain domains like ENS (Ethereum Name Service) or HNS (Handshake)? We are working with all parties to combine the Internet Computer + Blockchain Domains, adding more and more options to peel off layers of centralization. We already have worked on experimental implementations, so expect news soon...

There are two main things we had to address when tackling Internet Computer Hosting on Fleek. First, there isn’t a standard and quick way of accessing Canister data on the Internet Computer via HTTP, on the current web standards, without having to make actual Canister calls.

What’s more, this goes for all canisters and their data, not just FE canisters created by Fleek.

Secondly, we also have to consider that even if hosted on the Internet Computer, if we wanted to surface static sites from the IC on the current Web 2.0 we would need to handle basic concepts such as SSL, CDN, and DNS for our users.

Combine these two issues, and a little bit of radioactive open source code, and you get the reason why Fleek’s Gateway was born! Our very own transdimensional portal, (minus the disintegration-risk) that anyone, not just Fleek users, can use to access their Internet Computer-hosted Canister data over HTTP and an accessible URL format.

To access any canister, just add your canister ID before the URL , to get a url like this:

For example, for this Create React App we mentioned above! https://x4ytk-6yaaa-aaaab-qaiqq-cai.ic.fleek.co/ 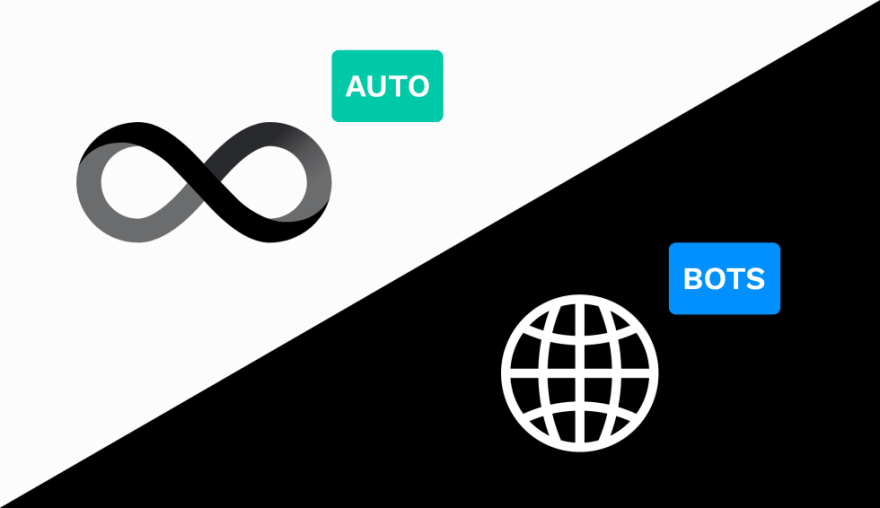 The Gateway itself as a proxy between users, and canisters on the Internet Computer. So, when it receives a request for a certain Canister ID, it translates that request, and the user receives the canister’s data through HTTP.

However, that is not all the Gateway does. Fleek’s Gateway gives users two Canister proxying options, or ways to connect visitors to your static site. 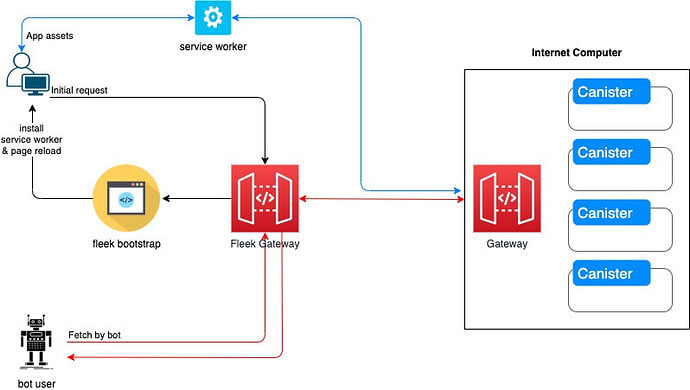 Using Fleek as a Proxy

The default option is using Fleek as a proxy, meaning the initial request will hit our servers, translate the user’s request, and return the data from the canister to the visitor. This experience is just as any current website, seamless, but it does mean Fleek acts as a constant intermediary between the user and the Internet Computer.

This is also the default option for bots, crawlers, and extraterrestrial requests. For example, search engines and social crawlers. This way we ensure your static site on the Internet Computer is crawlable, indexed, and its metadata is readable by bots for important details like… Displaying Twitter cards, or images when sharing links on social!

This alternative option is for users that want to further decentralize their experience, and connect their users directly to the Internet Computer. How does it work? If selected, only the first request will hit our Gateway, which will return a bootstrap script to the user, installing a Service Worker on their browser once, to connect them directly to the Internet Computer and retrieving all further requests directly from there, without having Fleek as a constant intermediary.

When you use the Service Workers option, a loading animation will appear once upon first visit (as the service worker is registered). All further visits are as seamless as the proxy, no loading screen, but without Fleek as a constant middleman. 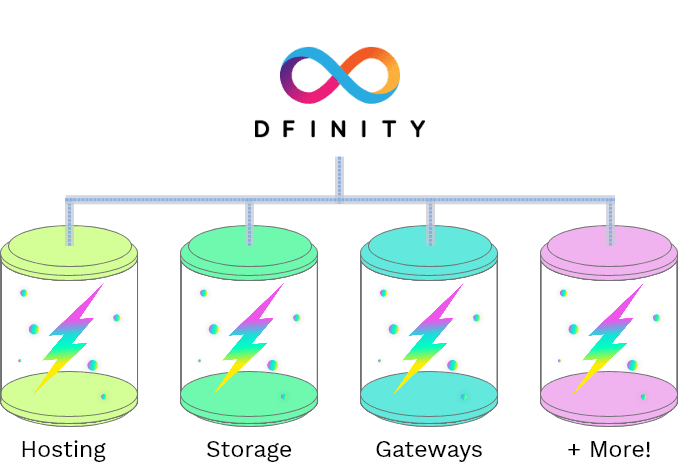 Now, let’s switch gears from short-term to long-term planning. What’s the “Beyond” in “To DFINITY and Beyond”? For a while now, at Fleek we have been working on becoming an aggregator of the base layer of the Open Web, combining its protocols (Internet Computer, IPFS, Filecoin, Ethereum, Textile, GunDB, ENS, etc.) to create the bits and pieces that together form the base layer of web services that the new internet needs.

The piece that was always left hanging was the centralization and lack of trustlessness in the infrastructure behind the services we provide. An issue that even Dapps today face, while relying on things like AWS in spite of having a partially decentralized infrastructure powered on Ethereum.

It’s an element of trust that is hard to remove, but has to be removed at some point in time so that we can have the base infrastructure of the new web built on trustless and decentralized technologies.

Next Steps: Why do it on the Internet Computer

With DFINITY and the Internet Computer, we want to achieve that. It’s still pretty early, but V1 of this trustless hosting product is an amazing example of the steps we can take by combining a suite of tools built on IPFS, Filecoin, Ethereum, and so on, with a trustless infrastructure living on the Internet Computer’s blockchain network.

It’s like the benefits we see in using Ethereum for Dapps, but applied to the core of the web, which is its supporting infrastructure (hosting / storage / serverless functions / and so on..). All this, software logic, data,

So, the natural next step for us is to begin transitioning Fleek from a centralized infrastructure and product, to an Internet Computer, canister-based solution. Today, our IPFS hosting and storage, for example, relies on us running the infrastructure for it, and the interface itself is dependent on a Web 2.0 infrastructure.

By moving everything, procedurally to the Internet Computer in a canister-setup that’s open and entirely user-controlled, we can begin building the new set of canisters for web services (hosting, storage, auth…). Entirely trustless, community-managed, and permissionless.

For us the Internet Computer is an additive to all the protocols we currently work with, not at all a replacement. In concept it would allow us to take an element of trust (us running an IPFS-node infrastructure for storage and hosting) and build it decentralized, on top of the Internet Computer, so that our suite of services is not reliant on Web 2.0 infrastructure only we control.

It acts, in a way, as the base layer that ensures all other protocols we work with, and the features they provide, are built on top of and supported by an open network, and not closed or centralized providers.

We are on an exploratory phase, but in our history of combining Open Web protocols, we have found nothing but great use cases. IPFS and Filecoin set the groundwork for new distributed ways of handling storage and hosting; its content addressing and hash model is simply AMAZING.

Much like we combined IPFS and Filecoin in the past (when building Space, for example) to achieve things like user-controlled storage, but where users have Ethereum-based accounts, or can have web-based IPFS storage where keys are protected and decentralized thanks to GunDB.

We believe that marrying them both to the Internet Computer in the future, could open up amazing opportunities for creating performant and distributed content networks. A couple of things that we’re excited about is having dual-hosting, on IPFS and the Internet Computer, or on IPFS systems running on that network itself; which we are exploring.

Next Steps: Wrapping it up 🚀

We’re pumped and as confident as ever, that reaching fully decentralized, trustless, and user-controlled services is not only possible, but the technology for it is already here, peeling off a bazillion of the remaining trust layers that today affect web services, Dapps, and more complex platforms that can’t be fully decentralized yet because they rely on services like AWS.

It’s month 3 on the year, and we have already announced Space, the Space SDK, Filecoin Archiving, Fleek Storage V2, and now our first steps onto the Internet Computer, and a future transition to a decentralized and user-controlled version of our platform that looks as bright as ever.

So stay posted, because we’re bringing more updates soon, and we are not thinking about slowing down our pace with these kinds of surprises!