The other day, a colleague asked for some help with a problem he was having. I sat with him for a while, debugging through the issue until we found and fixed it.

As he stood up to go, he said "I'll never be able to figure something like this out on my own."

Have you ever looked at something that someone else has done and just thought "I can't do that"?.

There's a perfectly normal curve for learning which is described by the Dunning Kruger effect: 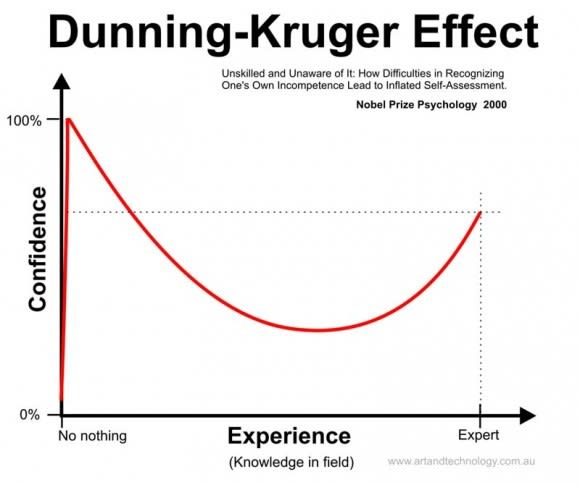 When people have a low experience of something, but just enough that they think that they understand it, they have extreme confidence. We see this in truly beginner programmers -- it's the first time we get something to work, and we assume that everything else is just as easy. However, as our experience expands, we start learning just how little we know, and our confidence drops.

A little learning is a dangerous thing
Drink deep, or taste not the Pierian spring:
There shallow draughts intoxicate the brain,
And drinking largely sobers us again.

But back to the learning from the mat.

I can't do that

When I started yoga, I couldn't even touch my toes, let alone do a handstand, headstand, bakasana or any other medium to advanced pose. I saw a lot of people give up, looking around and seeing more experienced yogis pulling off these incredible feats.

I felt fortunate in that the group I was in had extremely varied experience and capabilities. Some of the people I was practising alongside could do everything the teacher was asking us to do. Meanwhile, my toes remained stubbornly far away.

The one word that changes it all

I've ridden motorbikes for much longer than I've been able to drive a car. I'm a huge fan of the Ilse Of Man races have been a little reckless myself in my younger years. A few years ago, I decided to switch to an on/off-road bike (KLR 650), specifically because I knew I was going to get myself in trouble and I don't want to leave my family in a bad place if I wipe out for the eighth time. With the KLR, I go a little slower and ride a little taller, so I'm noticed in traffic.

But something I learned from riding - and heard a professional rider say - has stuck with me:

It's easy to race in second place

If you're racing at the front, you have to pick the best lines and take the majority of the wind force. If you can trail the leader, all you have to do is pick the same lines as they do, and you get the advantage of having them act as a windbreak in front of you. Notice though, that second-place lap times are usually very close to winning lap times. The second-place rider is still way better at racing bikes than most of us could imagine.

What this tought me is that it's not that I can't do what someone else has done before me, no matter how awesome. It just means I have to learn from them, emulate them, and perhaps I'll be riding in first some day. I have to be prepared to put in the work, and, if I am, I can achieve the same results.

The word that changes it all is: yet.

This is one of the most important phrases I've learned on the mat. The person in the cover picture for this post is Dylan Werner. Stop for a moment and watch one of his videos:

Dylan is obviously strong -- but he's not superhuman. He's obviously talented, but here's the secret: he wasn't born that way.

He got there through hard work.

Through hard work, I've been able to go from not being able to properly do even the simplest yoga poses to being able to do many of the more challenging ones, like bakasana, headstand, scorpion, peacock and firefly. I'm still no Dylan Werner, but I'm doing things I couldn't do when I started.

The catalyst, I found, was observing others in my classes. I was stable in headstand earlier, which encouraged the others. Barry nailed pincha mayurasana which made me confident that I could get there -- and I did, about a week or two later.

The key is the perserverance and focus on that mantra: "I can't do this, yet". "I am learning to do this, and I will be able to, at some point".

I found that often I'd put in the hard work, fall a lot, keep on trying, and, one day, it would just come easily.

I've had the same experience in code: wrangling with a new language, framework or problem, until, at some point, suddenly a light shines and the solution is there, just within reach.

You're going to see people around you who seem to be superhuman in their accomplishments. They are coding things that you may think are beyond your capabilities, and that may be correct, right now, but it doesn't always have to be.

Remember to say to yourself "I can't do that, yet". The first part of that sentence is just as important as the last: the recognition that you are not currently capable of everything, the understanding that other people's accomplishments have come from hard work, often over long periods of time.

It's all a journey, with multiple goals along the way. We just haven't gotten to all of them yet.

How I remember everything I learn

Once suspended, fluffynuts will not be able to comment or publish posts until their suspension is removed.

Once unsuspended, fluffynuts will be able to comment and publish posts again.

Once unpublished, all posts by fluffynuts will become hidden and only accessible to themselves.

If fluffynuts is not suspended, they can still re-publish their posts from their dashboard.

Once unpublished, this post will become invisible to the public and only accessible to Davyd McColl.

Thanks for keeping DEV Community 👩‍💻👨‍💻 safe. Here is what you can do to flag fluffynuts:

Unflagging fluffynuts will restore default visibility to their posts.