Issuing Identity and Permissions at the Data layer with Fluree DB

This tutorial is a follow up to the first tutorial found here on dev.to or on github on the to-do-list branch, where we built a to-do list generator using React and Fluree. If you are not familiar with Fluree, please refer to the first part of this tutorial series to learn the basics.

As previously mentioned Fluree is a Web3-capable graph database platform powered by an immutable ledger. The architecture of Fluree gives developers a lot of freedom and control over the way data is managed, specifically the enabling of permissions that go along with data maintenance. Unlike regular dbs, plagued with data-silos and ever changing APIs to manage application-specific permissions and identity, Fluree offers the ability to implement them directly in the data layer.

To fully understand the way identity and permissions work in Fluree, we will need to dive into the different collections and predicates that help facilitate this capability.

_user, _auth, _rule, and _role are built in collections within Fluree that hold the criteria needed to implement user permissions and control identity. Below is a diagram showcasing how each collection is connected to each other by their predicates. 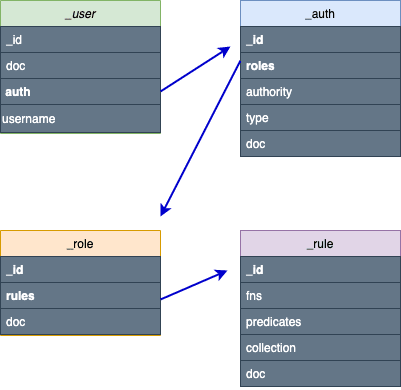 It is worth noting that an auth record does not need to be tied to a user, they can be used independently with a collection of your choosing.

The way auth records control identity in Fluree are by tying the record to a specific public-private key pair (specifically generated using the secp256k1 elliptic curve). This cryptographic identity enables the user to sign their transactions and queries according to their permissions. There are a number of ways to generate the public-private key/auth id triple, and can be found here in the docs. In this tutorial we will be issuing them using the Admin UI in the sections below.

Signing queries and transactions can be done in different ways found here, in this tutorial we use the @fluree/crypto-utils library.

Integrating identity and permissions into the Application

Now that we have a basic understanding of how identity and permissions can be used within Fluree lets take these concepts and configure them within our application. We will need to refine our schema, add roles and rules, create smart functions, and generate auth records with private-public keys.

Make sure to change the network and db variables located in the appConfig.js to mirror your Fluree network and db namespace, and double-check that you're using the correct port (e.g. :8090).

We have two types of users: list-owners and assignees. In this scenario we do not need to create multiple roles for these users, one role is suitable to control what the different users can see and do. Any difference in how list-owners and assignees can interact with lists and tasks can be permissioned based on how each user is linked to those records in the schema.

We will create an endUser role and utilize the existing root role. 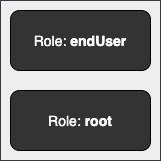 We can transact our new role to the DB:

Now that we have the root role and our additional endUser role we need to create the rules that will govern what the roles can and cannot do. Below is a graphic with the rules associated with each role.

At first glance it doesn't seem like the root user and the endUser differ in what they can and cannot do, but in order to fully grasp how the rules are enforced we need to dive into Smart Functions. Smart functions are functions written in Clojure*, they can be triggered with any query or transaction that a user attached to a certain role issues. These smart functions live in the _fn collection, the _rule collection has a predicate called _rule/fns which is a reference to this collection. So when an action takes place the smart function that is connected to a certain rule is evaluated and will either return true or false depending if the user in question has the permission to execute the desired action.

*Currently, Smart Functions are only usable in Clojure, although we are alpha-testing a version of Fluree that allows for JavaScript-written Smart Functions as well. Stay tuned for updates!

The JSON snippet above is an example of a transaction that issues both a rule and its accompanying fn. Starting with the rule object it includes a temporary id (for the transaction) that will evaluate to a integer once it's in Fluree. It also includes an id, a description, the fns associated with the rule in the form of a temporary id, ops is set to all (meaning this applies to both actions: transact and query), and the collection and its predicates to which this rule is attributed to. In this case it applies to the list collection and all of its predicates.

In short, this rule indicates that the fullAccessOwnListData smart function will be run every time a user with this rule either transacts or queries any data field available to records in the list collection.

The next object is a transaction item that creates the smart function connected to this rule. It uses a temporary id, a name, a description, and the code is in Clojure. Clojure is a Lisp family language developed for the Java Virtual Machine, and is the language Fluree uses to program its core software. For an in-depth look at Clojure's syntax visit Learn X in Y minutes: Clojure, and useful introduction material can be found at Clojure for the Brave and True. Lets break the code down:

In our implementation, this maps to the following:

The whole code evaluates if the relationship between the subject id and the auth record id return true, given the path. In this example in order for a listOwner to view their list data, their id must have a connection to the auth record id, via the path [list/listOwner _user/auth] that bridges that connection within the data & the schema that models it.

Not all rules may need a custom smart function as the one above, in some cases a user's ability to query and transact certain data should always be true. That means there does not have to be a startSubject or endSubject evaluated through a path. For a rule to always evaluate to true we simply set the _rule/fns to "fns": [[ "_fn/name","true"]], the same can be done if a rule must always evaluate to false.

The transaction above is a rule where all users can view assignee data, so this rule will always evaluate to true.

We won't go over every rule and their smart functions connected to the endUser role, however they can all be found here and transacted to the Fluree ledger.

Now that the roles and rules are transacted into the ledger it is time we create auth records for our users and connect them to public-private keys in order for us to sign queries and transaction, as well as see it in the app UI.

The sample schema provided here has users with nested auth records, like the example below:

This auth id is already tied to a public-private key pair, in the sense that it is derived directly from an secp256k1 public key. This auth record just needs to be transacted, along with the rest of the sample data. The gif below shows how to generate an auth record with private-public keys through the admin UI, by selecting transact on the left navigation bar, then pressing the Generate Keys button above the code editor.

This will prompt a modal to appear with the Public Key, Private Key, and Auth Id. You can either transact the auth record within the modal (remembering to make the appropriate role changes if necessary), then connect the auth id to a user in a separate transaction, or you can copy the auth object, and nest it into a user transaction similar to the one above. But be sure to save the public and private keys externally before closing the modal. In this tutorial there have six users in our sample data and their public-private keys and auth ids are kept in the usersAuth.js. Once the sample data is fully transacted, we can now move on to issuing signed queries and transactions.

The marriage between issuing permissions and generating private-public keys takes place when users sign queries and transactions. The signature proves that whoever is issuing the query or transaction has access to the private key, and so on successful submission it validates their access to view the data or make changes. There are a few ways to go about signing, in this tutorial we use the NPM package, @fluree/crypto-utils, but other methods can be found here.

The query below uses the signQuery function. It takes a private key, param, queryType, host, and db as parameters (defined below), then it returns an object with keys: header, method and body, which can be sent to the /query endpoint (or other possible endpoints such as /multi-query, history, and block). This specific query can be found here, it is triggered on load and defaults to the rootUser on the tab component. Each tab option is a different user with different permissions. The lists view changes given their identity.

These are two example transactions, they both use the signTransaction function, which takes an auth id, db, expire, fuel, private key, tx, and optional deps. It is similar to the query version, but the output of signTransaction is then placed within the body of the POST request. Please refer to deleteTaskFromFluree and editTaskProps for their full implementation.

At its core identity and permissions within Fluree are simply data, but with security in the data layer power and scalability are not at the mercy of firewalls and APIs. It's time to move away from application-centricity and embrace data-centricity.

To learn more about architecture, infrastructure, and identity, visit the Fluree guides section. And for other repo examples visit our developer hub.

Redis as a Database — Speed Test with K6

Once suspended, fluree will not be able to comment or publish posts until their suspension is removed.

Once unsuspended, fluree will be able to comment and publish posts again.

Once unpublished, all posts by fluree will become hidden and only accessible to themselves.

If fluree is not suspended, they can still re-publish their posts from their dashboard.

Once unpublished, this post will become invisible to the public and only accessible to Flor Marshall.

Thanks for keeping DEV Community 👩‍💻👨‍💻 safe. Here is what you can do to flag fluree:

Unflagging fluree will restore default visibility to their posts.