Original is posted on mkdev.me 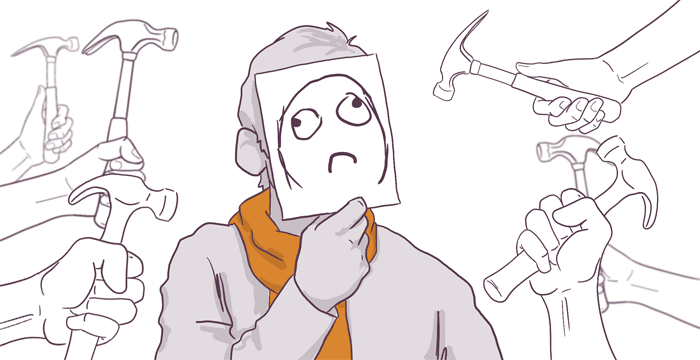 Some time ago, even before Leonid Suschev and I released Specializations on mkdev.me, we were discussing their possible contents for the god-knows-which time. Those discussions were exhausting and wistful and could even make the whole industry look repulsive. Classifying IT knowledge is a rather ungrateful task. For some the outcome would be unsatisfying and some would be even outraged with it.

Here are some questions that we’ve come across:

And that went on and on. Here you can find the result of all the discussions: mkdev.me/en/specializations.

What’s interesting is that Leonid doesn’t have a clear apprehension of programming and all the related topics. That’s fine, as here, on mkdev we teach people like that: with almost zero knowledge, those who don’t know what to do and what to choose, but fiercely want to get the hang of it. So I had to occasionally explain some details, global aspects and magic of the development.

Once, the conversation turned on Django and Ruby on Rails. Leonid tried to understand the fundamental difference between two web-frameworks, the difference which allows choosing between one and the other, when you have the particular technical specifications. The conversation took a sudden turn:

— What’s the actual difference between Python and Ruby?

— So that means that Rails and Django have absolutely different app-creating capabilities too.

— Then why is Yandex written using Python, and not Ruby?

— It’s written with dozens of languages, including Ruby and Python.

— And why not to use only one language? Why is something written with Ruby and something with Python?

And seriously, why? To answer that question I could have babbled about the fact that Python is perfect for the data science tasks and Ruby is the best solution for the small scripts and that’s why you need to use this and that. I could have also added that sometimes the speed of those particular languages is not enough, so the exemplary Yandex might also use Go for the speed-demanding components. That would be an accurate and satisfying response for any other co-founder and probably for any other digital-savvy interlocutor. After all, this also answers the other Leonid’s question about those fundamental differences in technologies:

— Why are some walls in this house made of wood, some of stone and some of glass? Why don’t we make all of them out of wood?

Indeed, the person ignorant of IT or a Junior developer that just started can think that the choice of a programming language or between two frameworks depends on some technological aspects. It might look like you pick either a hammer or a screwdriver in a situation when you just need to tap a nail in. Of course you need a hammer! But a screwdriver might come in handy too someday! That’s why the exemplary Yandex uses Ruby, Python, as well as C++ and C and lots of other things. Is that so? Well. Probably, it is. But that’s not the entire truth.

In fact, when you’re picking the technology, it might seem like you choose between a flagship iPhone and an Android phone. The reasons why you pick one or another are pretty close to the ones when you choose the technology, at least.

James always tries to encourage his Apple fan friends to have an Android instead, but lacks the arguments. Since there are no fundamental differences between his flagship Pixel and an iPhone 7.

James is not like his neighbor Bob, who has an Android too. Bob always calls iPhone users stupid iSheep and fervently tries to prove that Android is better. No one dares to contradict him, but his arguments are enough only for those who have similar mentality.

Once John (the one with an iPhone, remember?)gets a job in some company called WagnerCom. There he receives a corporate Android phone. So he has to use it for business issues and his iPhone for personal ones. After some time he gets used to Android. Now it’s equally as convenient for him to use an iPhone as an Android phone. He agrees with James that Android is better in some aspects, but also knows that in some other aspects he would prefer iPhone.

John has a son Michael, who’s into gadget-related web-sites. Reading some of them, he finds out about the phone which uses a brand-new experimental platform NonameOs. So Michael jailbreaks his iPhone and installs NonameOS.It works like crap, there are few apps, but it’s a basically new platform though. He hangs out with other 100 people on the message board, each of those wholeheartedly uses NonameOS. They believe that the right concepts of the right platform will win one day and NonameOS will win and will be on the same level with iPhone and Android, and then will even exceed them. And then all the people will be able to make calls, take pictures, text and surf the Internet with NonameOS phone.

And let’s not forget about James’ colleague William. William is in urgent need of the dual-SIM phone. That’s important, as he cannot afford having two phones but he definitely needs two SIMs. He has no choice but to buy some rare Android phone with a dual SIM option. There is no choice for him since there are no dual-SIM iPhones.

So now we have John, James, Bob, William and hundreds of thousands or even millions of people, each of those inclined to some particular phone. The choice might have been imposed by the social circle (of colleagues or friends), by the consumer marketing; or you might have bought it simply because you wanted to stand out of the crowd. And this goes on and on. But the result is that each of us can make calls, take pictures, text and surf the Internet with his or her phone. And actually there’s no huge difference in what to use for that.

There’s no some distinctive difference in what to use to write a web-app. You can use Django, you can use Rails or even Node.js. There’s no difference what to use to automate servers too. Both Chef and Puppet appeared at the same time and solve similar problems in a similar way. You can live with MySQL instead of PostgreSQL, if your new employer uses PostgreSQL all of a sudden. When you rewrite some slow parts of the app, you use something faster than Ruby, something like Go, Scala or Erlang.

The choice of technology stack is not a serious engineering project. It’s not a choice of the best instrument based on the technical requirements.
It’s not a choice between a hammer and a screwdriver. It’s a choice based on the specifications, historical reasons, job marketplace situation, personal preferences, expertise, habits and interests of the developer team, quality of marketing materials, susceptibility to marketing and hype of the people who work in the company.

Facebook uses PHP, because a long time ago a young student Zuckerberg knew it and it was faster for him to write Facebook using PHP. And afterwards it just didn’t make any sense to rewrite it completely.

Another fact, Facebook uses Chef, because someone from the company heard about it more than about Puppet. They also use Ruby, as they use Chef.

There’s definitely Go hidden somewhere too, because some SRE was bored and in his off-duty time he tried to use it and rewrote some internal services with it. Then he persuaded his colleagues that it’s a great idea. Why Go? It’s overhyped, it has many new instruments and it might be a nice CV entry in case he wants to quit.

Of course, there are some obvious no-choice situations when you choose technologies for some particular reasons. We have to use Swift when we create fully-fleged iOS games just like William has to use dual-SIM phone. Such limitations inspire to some extent. You don’t have to choose between two similar hammers, there’s a ‘golden stack’ of instruments.

Nothing stops you from using the same language for absolutely everything in most cases. We use Ruby, because it’s comfortable and fun for us. Then we rewrite some parts of the app using Go, because Ruby wasn’t fast enough and because Go is awesome. And we can include Spark-apps written with Scala. And then let’s try to explain to a non-programmer, why we couldn’t just use Scala in the first place and write the entire app and all its services using Scala. Or why couldn’t we just use Ruby for everything and fund the servers so they would work faster.

— This is so stupid. Why then do you write different parts of the app using different languages?

Once suspended, fodoj will not be able to comment or publish posts until their suspension is removed.

Once unsuspended, fodoj will be able to comment and publish posts again.

Once unpublished, all posts by fodoj will become hidden and only accessible to themselves.

If fodoj is not suspended, they can still re-publish their posts from their dashboard.

Once unpublished, this post will become invisible to the public and only accessible to Kirill Shirinkin.

Thanks for keeping DEV Community 👩‍💻👨‍💻 safe. Here is what you can do to flag fodoj:

Unflagging fodoj will restore default visibility to their posts.