A couple of weeks ago, I saw two things:

First, I saw a tweet from Charlie Gerard showing her great project to combine ML and Github culture to create a Github action to auto-admonish toxic comments on PRs and the like. 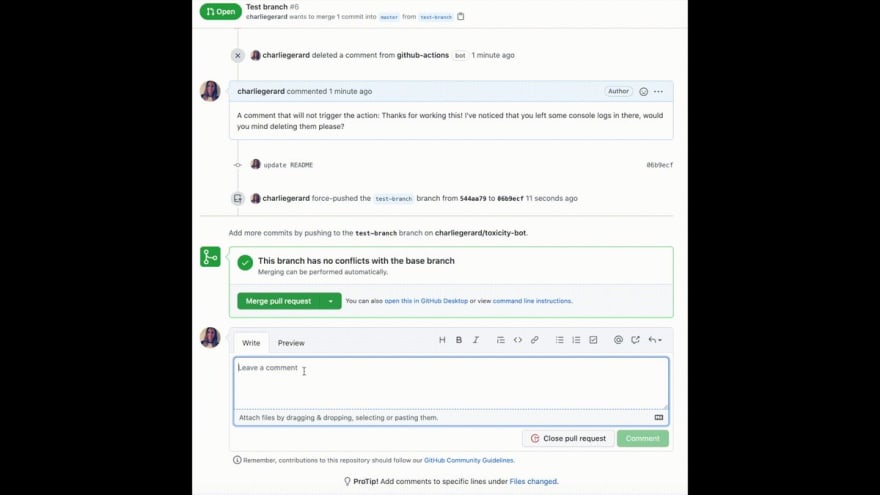 I built a Github action that uses TensorFlow.js to check the toxicity level of comments and PR reviews, to help create safer spaces 🙂

When content is classified as toxic, the bot notifies the author to give them a chance to edit!

Then I saw the Actions Hackathon challenge announced and thought I should give it a go.

So, inspired by Charlie's idea of making Github culture a little better (and no small amount of using her code-base to figure out Github Actions), I hereby present my very silly Github Action go-to-sleep aka The Go-To-Sleep-a-tron Hackathon Submission

Stop coding and go to sleep!

Stop coding and go to sleep!

Required
Just put ${{ secrets.GITHUB_TOKEN }} and it should work fine.

Optional
Put your custom message as a HTML formatted string:
e.g. custom_message: "Oh dear, its very late where you are.\nWe appreciate your hard work but maybe you should go to bed."

Default: "Its quite late, maybe you should go to sleep!"

If you do not have any Github actions already set up in your repo, start by creating a .github/workflows folder.

Inside your workflows folder, create a new .yml file, for example main.yml and copy the following lines:

In short, this Action will simply check the time of the commits pushed to the repo, and will post a comment to the commit if it was committed 'overnight', from the perspective of the committer's timezone. It will work on any branch and the message you send can be customised 😁

I've currently set it to trigger before 9am and after 7pm, because thats when you should be cooking, eating, sleeping and reading terrible dev.to articles instead of doing more work!

My intended user would be companies who want to discourage overworking, so if you want me to keep working on this, let me know!

For the most part I followed the Official Guides and Charlie's Code but in general my code does the following:

Pretty simple right, but there were some gotchas...

I initially wanted to have this trigger for any commentable Github action (Open PR, PR Review, Issues...) but for some reason, the only timestamp within the data provided both within the Github actions data and the Github API that contains the commiter's timezone is "commit data" inside Github Actions input data. Otherwise, the time is only available in UTC 🤷‍♀️ (you can check my test data for examples of the data given)
Naturally, the next step is to allow the addition of user-specific timezones as an input to the workflows/main.yml file, but this removed some of the magic and wasn't as fun 😔

Timezones are a known pain point in programming, and yes, there are some good libraries like moment.js to help with this...in a normal situation.
The issue I had, was that these timezone libraries are built with the understanding that you will know where the person is before you need to make the conversion, such as the country.
As far as I can tell, it's not possible to find out the location of a given Github user (profile location is too 'custom' and I found no usable data in the API), and plus...I didn't really need to care 😂. I already had the timezone, so I could just figure out if they were up late, regardless of their actual location.
However, there isn't an easy way to retain 'original timezone' when parsing dates with these libraries, so upon parsing the datestring, I would be stuck in UTC 😒
In the end, I just ended up using Regex to extract the timezone section of the string and do the 'is it bedtime' math manually. It was kind of painful, but I suppose I learnt something about dates in Javascript 😵...or something...

Another gotcha was that its kinda annoying to get Github actions running locally, so in developing this I was stuck making commits and pushes to check the functionality...
There is a rather neat tool called act which allows you to run Github actions locally 🙌 but I could only figure out how to get them from a remote source, so I just had to push the changes to Github anyway 😐
While writing this, I found an Issue in the repo that suggests getting local actions is doable, so that would be my next TODO.

Aside from some small obvious things, if people think this idea is interesting (and encourage me to improve it!), I think these additions might be useful:

All in all, thank you for reading, check out my Github for other projects and my Twitter for inconsistent mutterings. Cheerio!

Once suspended, frasertooth will not be able to comment or publish posts until their suspension is removed.

Once unsuspended, frasertooth will be able to comment and publish posts again.

Once unpublished, all posts by frasertooth will become hidden and only accessible to themselves.

If frasertooth is not suspended, they can still re-publish their posts from their dashboard.

Once unpublished, this post will become invisible to the public and only accessible to Frooth.

Thanks for keeping DEV Community 👩‍💻👨‍💻 safe. Here is what you can do to flag frasertooth:

Unflagging frasertooth will restore default visibility to their posts.