Backdrop-filter is as the name implies used for adding a filter on an element’s backdrop. It is similar to and shares the options of the CSS property filter.

Apart from the popular blur setting, there are several other effects. More than one effect can be used simultaneously by adding each effect after one another:

NOTE: To see the effects, there have to be some transparent (or partially transparent) parts of the element. No effects will be visible if the element for example has a solid background-color or background-image. 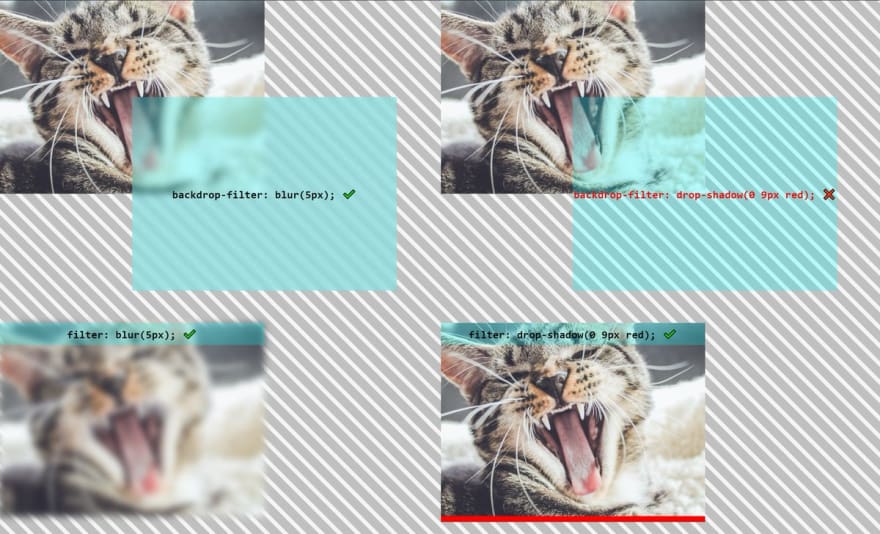 Dumb CSS question: what does `backdrop-filter: drop-shadow()` even do?

Another alternative to avoid using inline styles in the HTML document is to just reference the SVG filter ID (which still has to be placed in the HTML file) in the CSS file:

Just like with blend-modes and filters, backdrop-filters are useful for adding enhancements and effects that are uniform and does not require website administrators to know how to edit images in an image editing software program.

Backdrop-filter is at the time of writing supported in about 86% of all modern browsers.

Support is missing from Internet Explorer as well as from a handful of mobile browsers. Most importantly, the feature is behind a flag in Firefox, meaning users will have to enable it manually for it to work. Since the normal user will probably not have done this, it is important to have sufficient fallbacks when using this feature in production.

One way of creating fallbacks is to use @supports queries for browsers where such queries work. Browsers where @support queries does not work will need special treatment in the form of separate, additional fallback styling served specifically to them.

How to Allow the Feature in Firefox:

Once suspended, fridanyvall will not be able to comment or publish posts until their suspension is removed.

Once unsuspended, fridanyvall will be able to comment and publish posts again.

Once unpublished, all posts by fridanyvall will become hidden and only accessible to themselves.

If fridanyvall is not suspended, they can still re-publish their posts from their dashboard.

Once unpublished, this post will become invisible to the public and only accessible to Frida Nyvall.

Thanks for keeping DEV Community 👩‍💻👨‍💻 safe. Here is what you can do to flag fridanyvall:

Unflagging fridanyvall will restore default visibility to their posts.