Recursion is the method of a function calling itself, usually with a smaller dataset. Recursion is important because it often allows a breathtakingly simple algorithmic solution to certain problems that would otherwise be practically unobtainable with an iterative algorithm. Come along to check 11 Most Common Recursion Interview Questions with solutions for your next coding interview.

Originally published on FullStack.Cafe - Kill Your Next Tech Interview

Q1: Can you convert this Recursion function into a loop? ☆☆

Can you convert this recursion function into a loop?

Any recursive function can be made to iterate (into a loop) but you need to use a stack yourself to keep the state.

Q2: How Dynamic Programming is different from Recursion and Memoization? ☆☆

Q3: Return the N-th value of the Fibonacci sequence Recursively ☆☆

Let’s look at the diagram that will help you understand what’s going on here with the rest of our code. Function fib is called with argument 5: 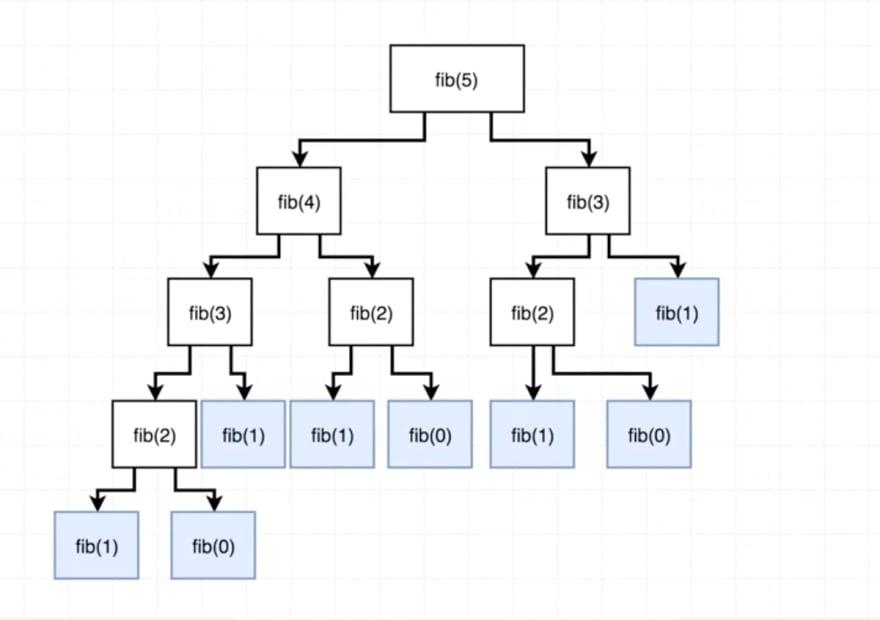 Basically our fib function will continue to recursively call itself creating more and more branches of the tree until it hits the base case, from which it will start summing up each branch’s return values bottom up, until it finally sums them all up and returns an integer equal to 5.

In case of recursion the solution take exponential time, that can be explained by the fact that the size of the tree exponentially grows when n increases. So for every additional element in the Fibonacci sequence we get an increase in function calls. Big O in this case is equal to O(2n). Exponential Time complexity denotes an algorithm whose growth doubles with each addition to the input data set.

Q4: What is a good example of Recursion (other than generating a Fibonacci sequence)? ☆☆

Q5: What is the difference between Backtracking and Recursion? ☆☆

P.S. Opportunistic decision making refers to a process where a person or group assesses alternative actions made possible by the favorable convergence of immediate circumstances recognized without reference to any general plan.

Q6: Convert a Binary Tree to a Doubly Linked List ☆☆☆

This can be achieved by traversing the tree in the in-order manner that is, left the child -> root ->right node. 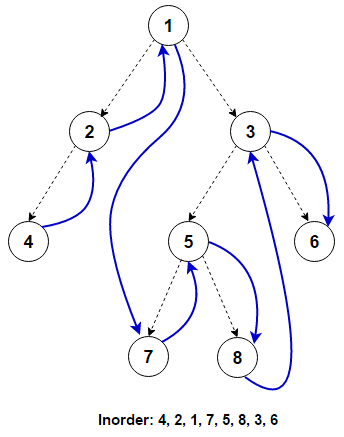 This problem can be solved recursively using a divide and conquer approach. Below is the algorithm specified.

Recursive solution has O(h) memory complexity as it will consume memory on the stack up to the height of binary tree h. It will be O(log n) for balanced tree and in worst case can be O(n).

Q7: Explain what is DFS (Depth First Search) algorithm for a Graph and how does it work? ☆☆☆

Depth First Traversal or Depth First Search is a edge based recursive algorithm for traversing (visiting) all the vertices of a graph or tree data structure using a stack. The purpose of the algorithm is to mark each vertex as visited while avoiding cycles. DFS traverse/visit each vertex exactly once and each edge is inspected exactly twice. DFS is a genuinely recursive algorithm that uses stack for backtracking purposes, not for storing the vertex discovery "front" (as is the case in BFS).

The DFS algorithm works as follows: 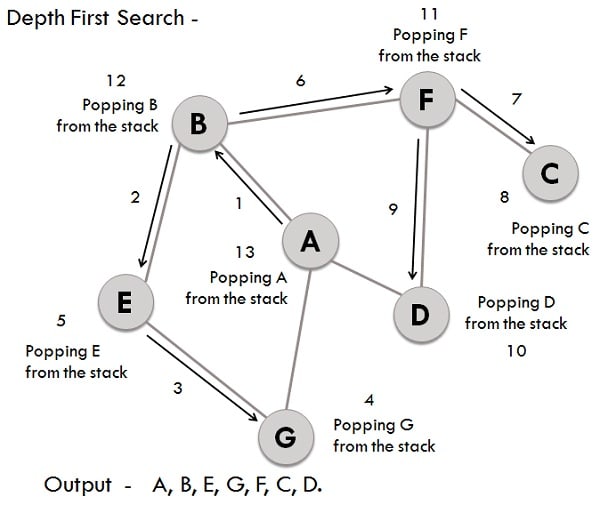 Q8: Binet's formula: How to calculate Fibonacci numbers without Recursion or Iteration? ☆☆☆☆

There is actually a simple mathematical formula called Binet's formula for computing the nth Fibonacci number, which does not require the calculation of the preceding numbers:

It features the Golden Ratio (φ):

The iterative approach scales linearly, while the formula approach is basically constant time.

Assuming that the primitive mathematical operations (+, -, * and /) are O(1) you can use this result to compute the nth Fibonacci number in O(log n) time (O(log n) because of the exponentiation in the formula).

In traditional recursion, you perform the recursive call, take the return value of that call and calculate the results. You get the results of your calculation only until you’ve returned from every recursive call, requiring a lot of space on the call stack:

In tail recursion, you calculate the results first, and pass the results of your current call onto the next recursive call:

Now, when you are ready to calculate the next call, you don’t need the current stack frame. You are calculating the results and passing them as parameters to your next call. No more worries about stack overflow!
This tail recursive solution is constant O(n) time and constant O(n) space complexity.

Start from the bottom up by asking and answering tiny questions:

How to understand that part?

Now assume that the last node has been reversed. Just like this:

Why? Any problems you may face with that solution?

Yes. It's called Memoization. Memoization is an optimization technique used primarily to speed up computer programs by storing the results of expensive function calls.

Let’s look at the diagram that will help you understand what’s going on here with the rest of our code. Function fib is called with argument 5. Can you see that we calculate the fib(2) results 3(!) times? 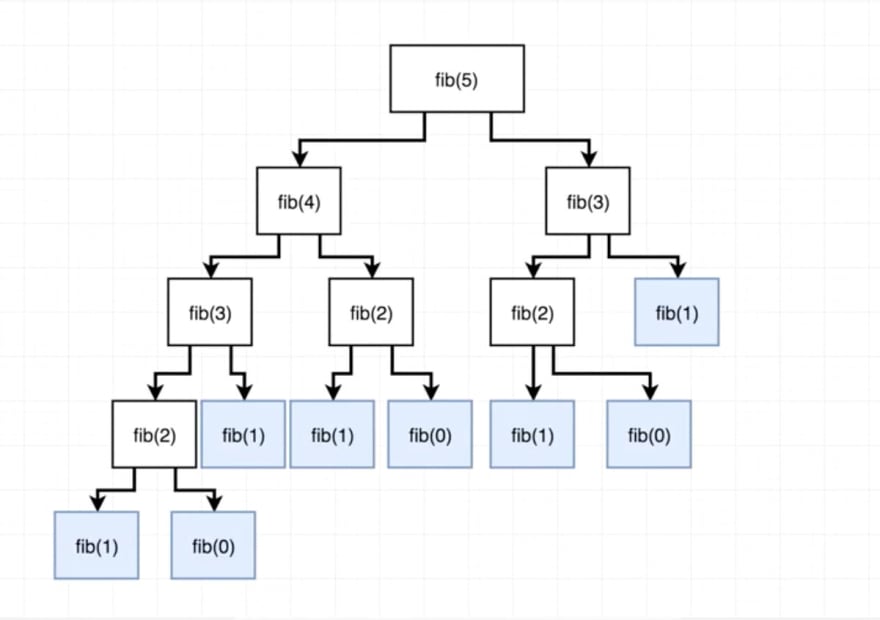 Basically, if we just store the value of each index in a hash, we will avoid the computational time of that value for the next N times. This change will increase the space complexity of our new algorithm to O(n) but will dramatically decrease the time complexity to 2N which will resolve to linear time since 2 is a constant O(n).

There’s just one problem: With an infinite series, the memo array will have unbounded growth. Eventually, you’re going to run into heap size limits, and that will crash the JS engine. No worries though. With Fibonacci, you’ll run into the maximum exact JavaScript integer size first, which is 9007199254740991. That’s over 9 quadrillion, which is a big number, but Fibonacci isn’t impressed. Fibonacci grows fast. You’ll burst that barrier after generating only 79 numbers.

Q12: Is it always possible to write a non-recursive form for every Recursive function? ☆☆☆☆

When you use a function recursively, the compiler takes care of stack management for you, which is what makes recursion possible. Anything you can do recursively, you can do by managing a stack yourself (for indirect recursion, you just have to make sure your different functions share that stack).

Thanks 🙌 for reading and good luck on your interview! Please share this article with your fellow Devs if you like it! Check more FullStack Interview Questions & Answers on 👉 www.fullstack.cafe

Controlling Procrastination and Get Your AWS Solution Architect Professional Certificate