The concept of ‘Minimum Viable Product(MVP)’ has been made widely popular by The Lean Startup movement and is religiously used by everyone ever since. Enterprises are taking a page out of Eric Reis’s book and trying to adapt and adopt some of its best practices, MVP being one of them. But the problem and paradox of MVP is that in order to succeed in a modern digital world, it should be neither just minimum nor simply viable. Which also rises a question whether ‘MVP’ is still the right term to use. Today we dive deeper into why large companies should go with this strategy and uncover the contradictions it has gathered around to finally get to the bottom of what is essentially MVP?

Why Bother with MVP?

If executed correctly, MVP helps to focus on the most important first and get a real feedback from users. By putting customers’ needs as a priority, it checks if by any chance you are building a product no one wants.

MVP in a modern digital world should be neither minimum nor viable.

MVP is not the end product but it still has to bring customers value. The idea is that instead of developing a polished final version of a product that can be costly, time-consuming and generally risky, you focus on just enough features to bring impact first as a way to test your hypothesis. This way you fail fast, learn fast, lower the risk and apply your gained knowledge in the next iteration of the product development. Something startups have embraced long ago and enterprises are learning to adjust to by becoming agile.So basically MVP helps reduce costs, time and money for the project. A lot of successfull projects started from MVP at Perfectial, like BuzzTarget, Prosper p2p lending marketplace and Metic, SaaS business intelligence platform.

But the challenging part for large companies is in changing their mindset. Enterprises are actually used to releasing highly complex and polished products that showcase their quality. And delivering a product that has incomplete features may look like a failure. And by adopting MVP, they need to shift from releasing these complete products to learning what features have the biggest ROI through a release cycle and investing in them.

Minimum Viable Product philosophy can help enterprises better adopt those agile principles, speed up innovation implementation and product release from years to months. The only thing left to tackle – is how to execute MVP?

How Not to Build MVP

A highly popular ‘cupcake MVP’ suggests that rather than start from a dull and dry cake and later add filling and icing, you start with a cupcake and iterate into a final version of a cake.

This approach is a  source of inspiration of a very popular on the Internet ‘Skateboard into a car’ analogy. 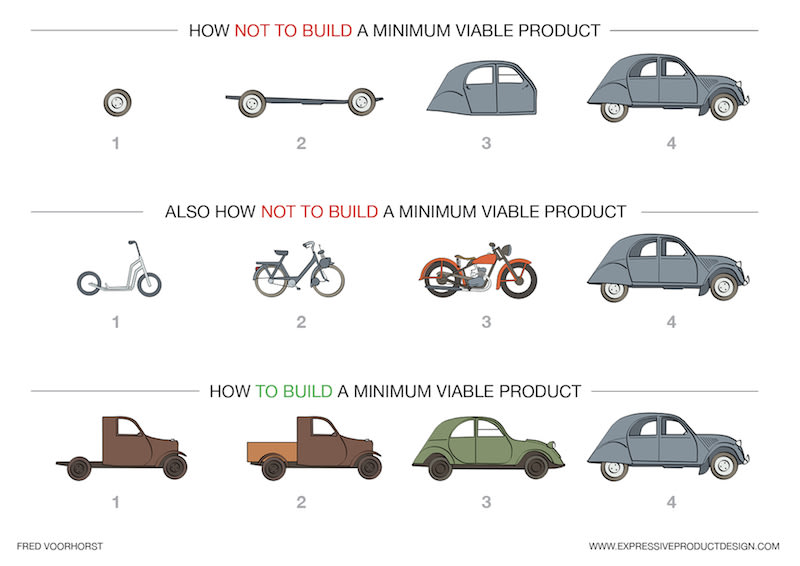 While its initial thought is completely true – you can’t develop separate parts that eventually combine into a product. What are the odds that a person who’s interested in buying a car will be excited by the prospect of purchasing a wheel? Pretty much as slim as the idea of them wanting to buy a skateboard or a bicycle, actually.

MVP has to have common core features with your final product. It should be a sequence of products that explore your key idea for the final version. By testing and iterating the bare minimum you can create another prototype that’s not only minimum but also viable and that eventually will lead you to the product itself. But building a full-featured motorcycle when you want to attract an automotive market is not the right way of doing it. By pursuing this model you will either put your initial idea of a car on hold and become a motorcycle expert instead or you will build a product that has no validated market through your MVP.

Should You Use char, varchar, or text in PostgreSQL?

How To Handle Routing in React Apps with React Router

Getting Started with Firebase for Web Development

Galyna Chekan
Music Monday — What are you listening to? (Dance Edition)
#watercooler #discuss #music
How to download Youtube Music and Videos with Python
#python #tutorial #productivity
Series vs. single: which type of technical article do you prefer?
#discuss #meta #writing #community

Once suspended, galyna_chekan will not be able to comment or publish posts until their suspension is removed.

Once unsuspended, galyna_chekan will be able to comment and publish posts again.

Once unpublished, all posts by galyna_chekan will become hidden and only accessible to themselves.

If galyna_chekan is not suspended, they can still re-publish their posts from their dashboard.

Once unpublished, this post will become invisible to the public and only accessible to Galyna Chekan.

Thanks for keeping DEV Community 👩‍💻👨‍💻 safe. Here is what you can do to flag galyna_chekan:

Unflagging galyna_chekan will restore default visibility to their posts.