In 1994, the so-called Gang Of Four (GOF) published their book, Design Patterns: Elements of Reusable Object-Oriented Software, in which they presented a catalogue of simple and succinct solutions to commonly occurring design problems.

The Simple Factory Pattern is probably one of the most widely used patterns and at the same time, it is also one of the most underused software patterns. I frequently come across scenarios in code bases, when developers have encountered a problem and instead of elegantly handling it, they often pollute function methods with additional lines of cruft logic. Which can often be the source of additional logic bugs or lead to scalability and adaptability issues later.

Simple Factory Pattern is a Factory class in its simplest form, compared to Factory Method Pattern or Abstract Factory Pattern, is a factory object for creating other objects. In simplest terms Factory helps to keep all object creation in one place and avoid of spreading new key value across the codebase.

The classes a Simple Factory Pattern returns will have the same parent class and methods but will perform the task differently dependent on the type of data supplied.

Let's take a look at the diagram to get a high-level view of how the Simple Factory Pattern works in C# and .net core. The simple factory design pattern is a form of abstraction, which hides the actual logic of an implementation of an object so the initialization code can focus on usage, rather than the inner workings. 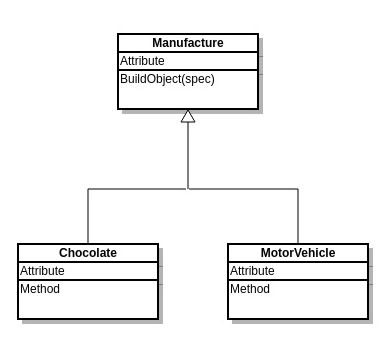 In the diagram Manufacture is a base class, and classes Chocolate and MotorVehicle are derived from it, the Manufacture class decides which of the subclasses to return, depending on the arguments provided.

The developer using the Manufacture class doesn't really care which of the subclasses is returned, because each of them have the same methods but will have different implementations. How the factory class decides which one to return, is entirely up to what data is supplied. It could be very complex logic, however, most often it is very simple logic.

We wouldn't want to pollute our code base with different string manipulation strategies when we could make use of different classes to handle this scenario based on the input received.

Deciding which version of the name to display can be a simple decision making use of the simple If then statement.

We'll start by defining a simple class that takes the username as string argument in the constructor and allows you to fetch the split names back.

First, we'll define a simple base class for the Username, consisting of the basic properties we need.

We can develop two very simple derived classes that implement the abstract class and split the username into two parts in the constructor. In this example we'll base the class on the assumption that the username is separated by a space, when we need to use the FirstName first scenario

In the second class, we'll base it on the assumption that the name is split by a comma.

We'll build a Simple Factory which simply tests for the existence of comma and then return an instance of one class or the other. 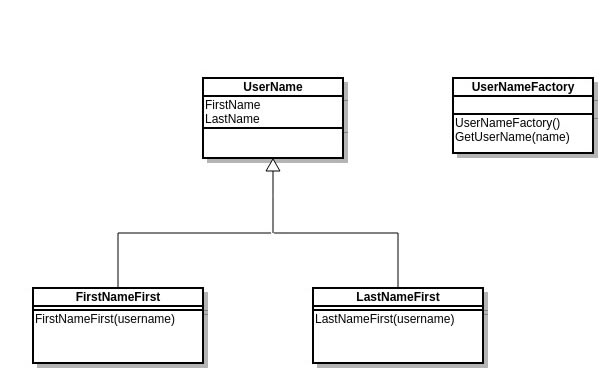 As you can see now when we make a call to GetUserName function we simply pass in the string and the factory method decides which version of the UserName instance to pass back to the application. The developer doesn't need to concern themselves with any of the string manipulation required.

The UserNameFactory simple factory design pattern is a form of abstraction, which hides the actual logic of an implementation of an object so the initialization code can focus on usage, rather than the inner workings. provides us the detail we need, all we need to do is pass the name string in and the factory will determine which class to use to format the data.

That is the fundamental principle of the Simple Factory Pattern, to create an abstraction that decides which of the several possible classes to return. A developer simply calls a method of the class without knowing the implementation detail or which subclass it actually uses to implement the logic.

This approach helps to keep issues of data dependence separated from the classes' useful methods.