This is the second article of a series that aims to explain in detail a step-by-step approach to building an Angular application with NGRX.

In the first article of this series, I wrote a small overview of all the concepts surrounding the NGRX platform.

If you have never worked with NGRX, or have never done something in-depth with, I’d really recommend you read it.

In the previous article, the concepts were explained using the current NGRX version. In order to keep the articles up to date, from now on I will introduce and explain the same concepts using the latest features released in NGRX version 8. There’s some really cool stuff out!

In particular, we will look at how to create:

What is this article about?

In this article instead, we will explore the process of building the entities that make up our store and will be setting up the entity adapter, the actions, and the reducers for each entity.

As a follow up to one of my previous articles about creating a scalable folders structure, we will see an example of creating store modules as service modules imported by our domain module.

We will build an application that retrieves live crypto prices from Coincap** and displays them in a customizable dashboard.

We will call this demo application Cryptofolio, which I hope to publish at the end of this series.

** I explored various websites for fetching live prices and Coincap was by far the easiest and clearer provider. Kudos to the team!

Setting up Angular and NGRX

Let’s see how to set up an Angular application and NGRX.

The first thing you may want to do is to create a new application with Angular CLI and add the routing and style parameters.

Let’s install all the libraries needed to work with NGRX:

And you’re pretty much all set!

Let’s take a brief look at the project structure I opted for: 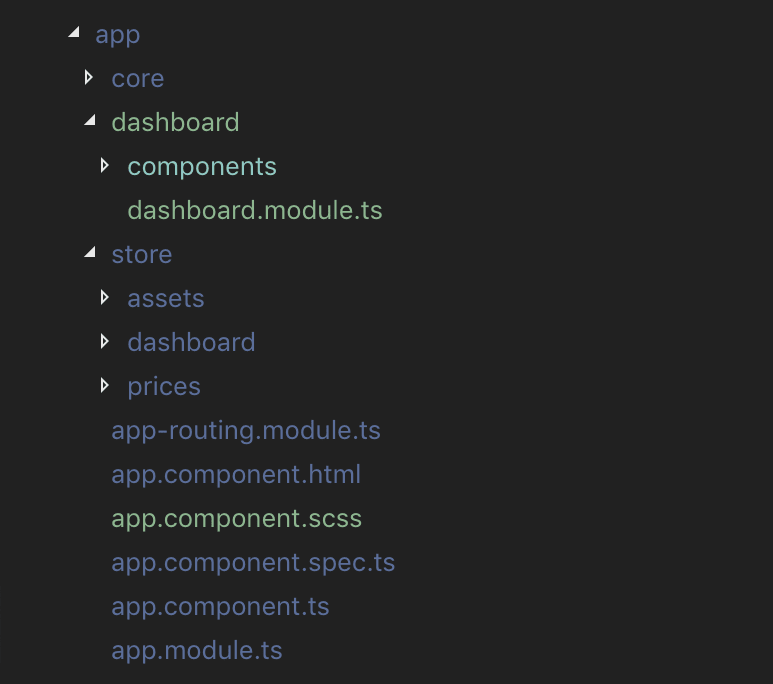 Let’s take a look at the DashboardStoreModule which is still very simple:

The DashboardModule will then import DashboardStoreModule and the other store modules:

In order to make lazy-loaded feature modules work with NGRX, we need to call the forRoot method, although with empty values, for both the StoreModule and the EffectsModule.

In order to architect the store, we need to first analyze our data structures.

As I mentioned above, the application will feature a dashboard with tiles, and each widget will contain cryptocurrency price tickers. In order to retrieve to display the prices, we first need to load the assets (cryptocurrencies).

We then have 4 different entities that we will use to build our fairly simple store:

We have two ways of building the store:

I personally prefer a flat structure.

Why? I have, mistakenly, opted for nested structures in the past and I found the following issues:

In this simple example, it doesn’t really affect greatly performance or complexity. However, if you plan on building a big application with a complex state, you will quickly see how the selectors and the store complexity creeping up as a result of a nested structure.

My advice is to keep the store as a flat structure of objects and keep the relations between them using unique values.

For simplicity, we will keep the dashboard fairly minimal. We only need two things from a widget:

In order to build this part of the store, we will use @ngrx/entity .

Let’s first create a class named Tile that represents the model of our state:

Of course, unless a tile is preloaded with an asset ID, the asset ID won’t be defined until the user decides which asset to display, which is why we mark as possibly undefined.

We move on and proceed to create the adapter for our state. Our state will simply be an entity state with a collection of tiles:

In order to create our actions, we will be using the new factory provided by NGRX 8 called createAction .

To summarise the code, we have created 3 actions:

Notice that props is a function that gets imported from @ngrx/store and gets called as a second argument.

In order to build the dashboard reducer, we will use the new factory method called createReducer that takes the following arguments:

We import the reducer in the DashboardStoreModule :

As we are going to receive the list of assets using Coincap’s API, we’re just going to replicate their interface:

In order to fetch the assets, we will need to perform an HTTP request to Coincap’s API. The HTTP action will be going through the effect method we’re going to define in the next article.

What’s important to notice here is the way I’ve broken up the assets’ actions:

The only reducer function reacting to the addAssets action will simply add all the assets to the store once they get fetched.

The prices returned by Coincap’s API are very simple and are just objects with the key of an asset and its relative price. As such, we have a very simple store for prices.

We will be creating 3 actions:

As the prices returned by Coincap’s real-time API are simply a key with the asset and its price, we really don’t need to do much with the entity framework.

Indeed, for each price received, we simply set the key with the asset ID in our store and its price by spreading the price objects with the new payload.

If it doesn’t exist, it gets created, otherwise, it gets overwritten with its newest value.

Imagine our state is:

And our payload from the WebSocket’s stream is:

This will simply become:

And here is the code with one simple action:

An overview of the Store

Let’s take a look at the store with some data:

In the next article, we're going to build the effects that are responsible for fetching assets and prices from Coincap’s API.

I hope you enjoyed this article! If you did, follow me on Medium or Twitter for more articles about the FrontEnd, Angular, RxJS, Typescript and more!

Once suspended, gc_psk will not be able to comment or publish posts until their suspension is removed.

Once unsuspended, gc_psk will be able to comment and publish posts again.

Once unpublished, all posts by gc_psk will become hidden and only accessible to themselves.

If gc_psk is not suspended, they can still re-publish their posts from their dashboard.