So what are we talking about when you hear the phrase 'same origin policy'? Simply put, 'same origin policy' is a concept in which web browsers allow content to be shared between web pages, but only if those pages adhere to the criteria of coming from the same origin. This is a built in feature of most web browsers, and is intended as a security feature in which to deter bad actors from trying to manipulate web pages using malicious code.

This policy, while great for security, can limit the ability for verified websites to share data between each other. This inhibits the functionality of many scripts and APIs. In order to work around same origin policy, web browsers have agreed to a system called CORS, which allows certified web pages to share with each other, no matter their origin.

Same origin is determined by a handful of factors. These are:

Here are some examples in order to illustrate what does and does not constitute a 'same' origin. We're going to compare these to our base example: http://www.example.com/dir/page.html 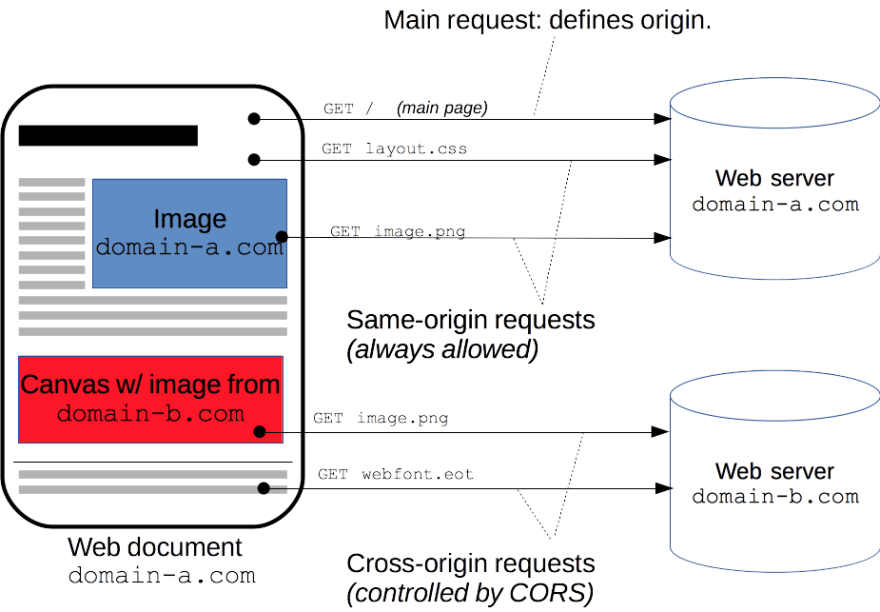 So, same origin policy has a few inherent hangups. Most notable is that sharing data between websites is rad! Allowing scripts to exercise between sites allows us all kinds of cool functionality. So how do we get around same origin policy? That's where CORS comes in.

CORS stands for Cross Origin Resource Sharing, and that's exactly what it allows us to do. CORS utilizes http headers to certify secure connections between sites. Think of a class field trip. To get on the bus and go to the museum, you need a signed permission slip. Your teacher is very bright and won't let a forged signature pass her inspection. The only way to go on the field trip is to have a certified signed permission slip. CORS is that very important parent's signature.

Same origin policy is a great security tool, that helps prevent malicious scripts from running amok in your browser. However, sometimes we want scripts to run in our browser! In order to do this, we can utilize CORS to send certified requests to another website for their data.

Interaction to Next Paint