Today, I will be walking you through on how to Authenticate your application routes using the Auth Guard.

Export An Instance Of The Store

When you init your quasar app (with the current version as of the time of writing this article). Your store will come predefined with the below image 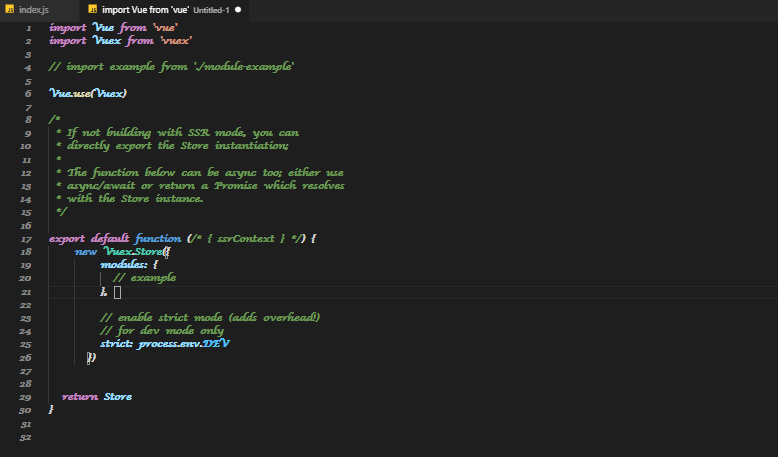 To Add new vuex store Module, write the below code in your project root terminal

Once that is done, import the vuex module into your store index.js, and register it inside the modules section. 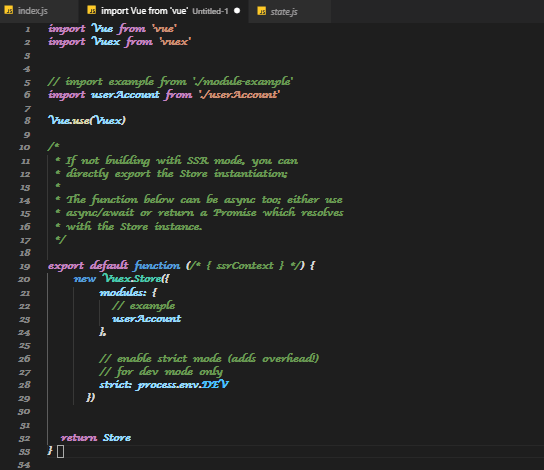 Line-6: Importing the new module
Line-23: Registering it into the module section...Do same for new modules you create.

Almost Done, Time To Actually Export An Instance of The Store 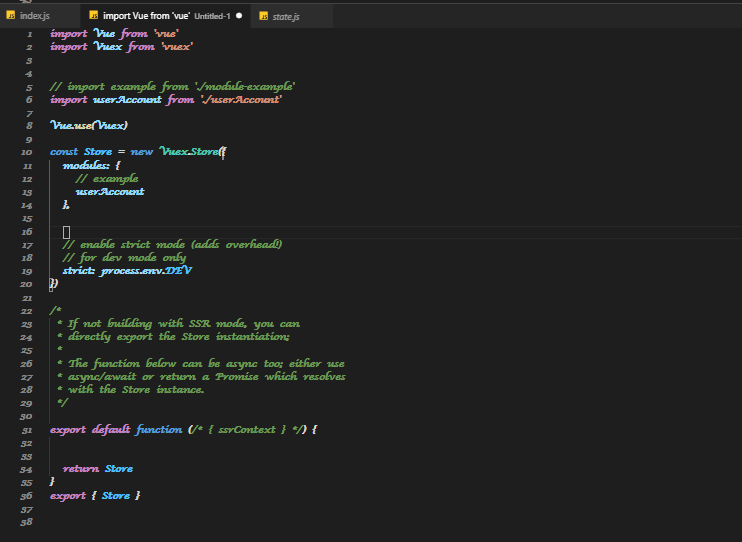 Line-10: Created a constant variable 'Store' (watch the name Store). where i intanciated a new Vuex.Store().
Line-56: I exported the instance i created on line 10.

Import the exported Store from the store index.js, so as to have access to your store on the route.js

Add beforeEnter guard into the Route you wish to Authenticate 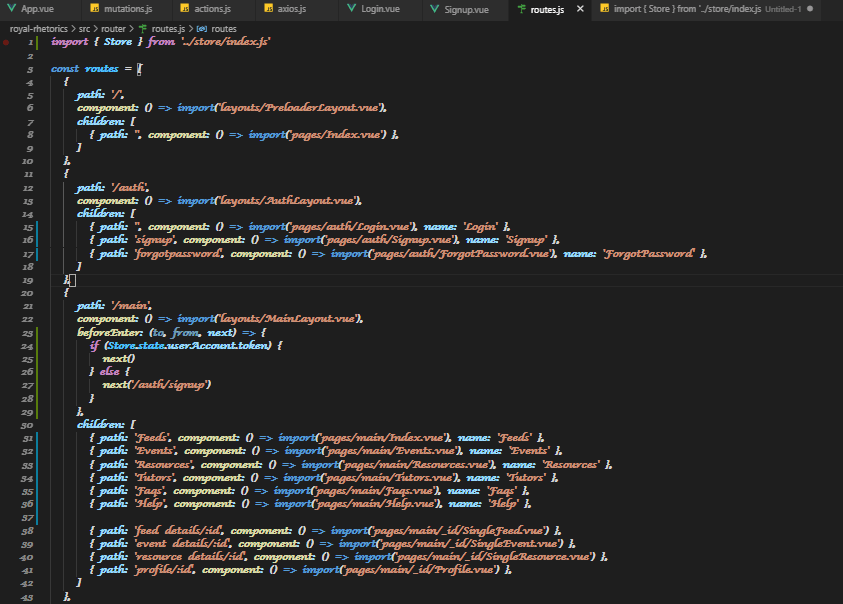 This is a navigation Guard in vue, which allows you to intercept the navigation between your current page and the next page. Just like axios interceptors (if you ask me). So it's being passed three (3) parameters

to : points to the next route/page you're about to enter

from : points to the route/page you just left

next : this is a callback function, which when used as next(), would continue the function the navigation had (say the token exits, the next() will just log user in). But when the authentication fails, you then use the next('/signup'), to redirect user to the signup page.

Create your Token and User data in your Store State

Remember that Quasar Store States are always a function with returned object.

Line-1: I imported the axios, because I want to set the header, of the authorization.
Line-4 to Line-9: This takes care of the user signing up, commiting to mutation with the payload, setting the localStorage with the 'token' and 'user'. Then I have a callback function of setAxiosHeaders(), which is then used to set the axios headers.

Line-11 to Line-13: Is used to log user out and destroy the token from the localStorage

Line-16 to Line-21: Is used to log user into the system, then commit the same mutation as the line-5, with same details.

Line-24 to Line-27: Is the callback function used in Line-8, to set the axios header.

Line-2 to Line-5: This is for mutating the state, by adding the token and the user object gotten from the payload, passed along by the actions, to the state.

Line-7 to Line-13: This is used to destroy the users token and object, and remove them from the localStorage.

Using the Above in Signup.vue file 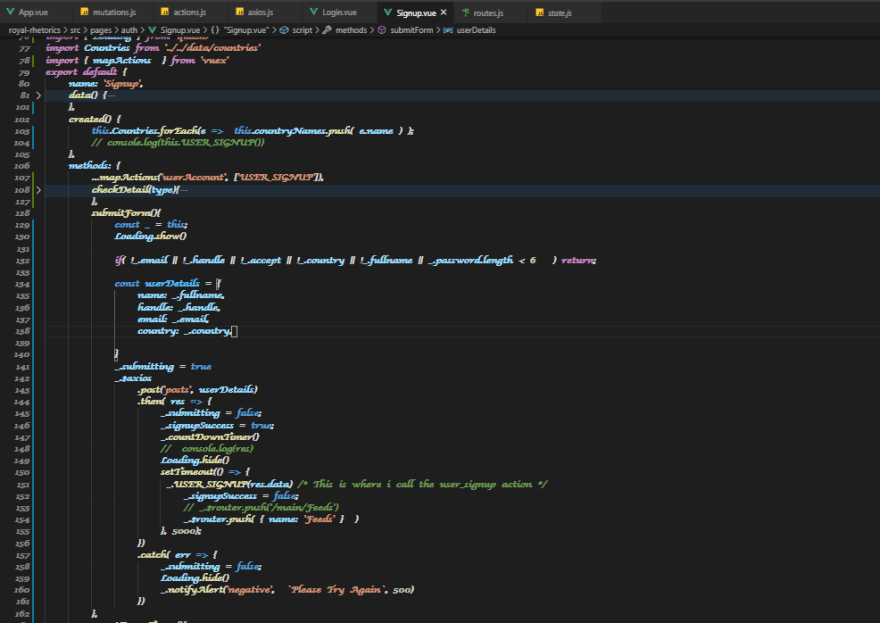 Line-151: This is where I passed the payload, gotten from the response of the axios call. From there, check out the actions, and how the payload was used.

Using the Above in Login.vue file 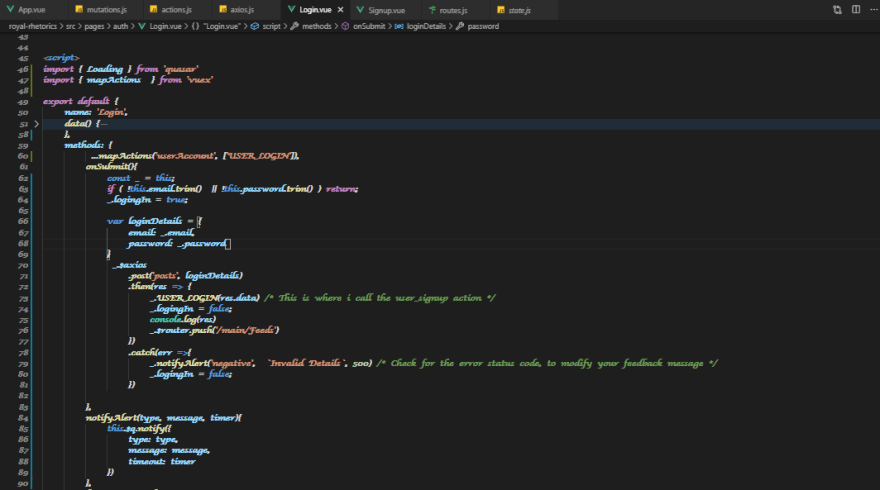 Line-73: This was where I called the vuext action, and passed the payload.

Simply attach a function to your logout button, which would call the vuex mapAction to notify the mutation to clear the token and user from the store and the localStorage, then redirect the router with router.replace('/')

Please check Actions and Mutations to know how the USER_LOGOUT was used.

Exploring Yew, the rust-based frontend framework as a Vue Developer

Once suspended, gikwegbu will not be able to comment or publish posts until their suspension is removed.

Once unsuspended, gikwegbu will be able to comment and publish posts again.

Once unpublished, all posts by gikwegbu will become hidden and only accessible to themselves.

If gikwegbu is not suspended, they can still re-publish their posts from their dashboard.

Once unpublished, this post will become invisible to the public and only accessible to George Ikwegbu Chinedu.

Thanks for keeping DEV Community 👩‍💻👨‍💻 safe. Here is what you can do to flag gikwegbu:

Unflagging gikwegbu will restore default visibility to their posts.