I'm certainly not an expert web developer/designer, so I get excited when I discover tools that make my life easier. At the moment, I'm excited about CSS grid. I have known about CSS grid for awhile, but I just now encountered a project that gave me a real idea as to why CSS grid is so great. I'd like to share a little bit about this experience.

I do online math curriculum development (and teach math) for a living, but I recently started doing freelance web development work (because I really enjoy learning about web dev.). I started working on a project for a client, that consists of creating web-based typing lessons. Part of the requirement was to create a non-interactive on-screen keyboard where the keys light up on keystroke.

This was going to be an interesting task, because the layout of keyboards is not very "rectangular," in the sense that keys are offset and some keys are wider or taller than others. Here's what I ended up with:

Bringing in "The Grid"

I noticed that 15 "normal sized" keys fit on a single row of the keyboard, but some rows contain a mixture of "wider" keys and "normal" keys. To handle this, I ended up splitting the keyboard container (the QWERTY keyboard, left side of image above) into 15*4 + 14 = 74 tiny little columns. Each "normal" key spans 4 of these columns, each gap between keys spans 1 column, and the wider keys span a variety of columns. Each row of the keyboard spans just 1 row, whose height is 4 times as large as the width of each column. This is shown here:

Then, each child of this container is applied a class prefixed by .g- to indicate how many columns it should span. As an example, a normal key would have the class .g-4 and this class contains the following:

That's about all it takes! The grid-column: auto / span 4 indicates that this class shouldn't affect the starting column of the element, but the element should span 4 columns. I had my list of keys in a JS array, along with how many columns they should span, and then looped through this array and output the grid elements using Vue.JS. Pretty clean!

I'm not a CSS expert, but I think this could have been done using Flexbox, because I didn't really do anything "vertical" in nature. However, the number pad on the right side (see the first image) has keys that span multiple rows. Now, this is a place for the grid to really shine! I created the number pad in essentially the same way as the QWERTY keyboard. This is what the grid looks like for the number pad: 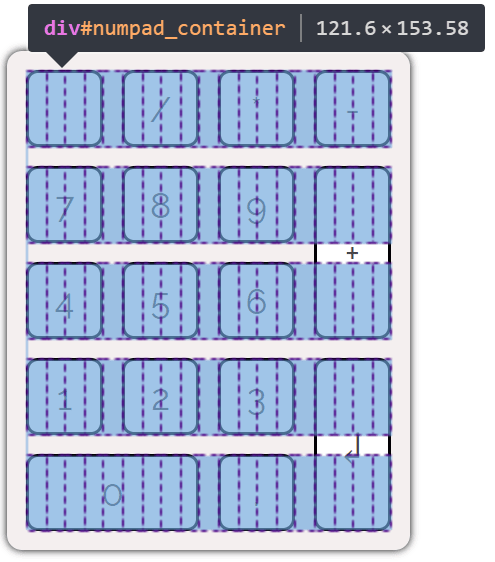 However, the Plus and Enter keys both span two rows. Two handle that, I merely added an id to both of those keys and added a mere three extra lines of CSS for each of those keys. For example, say the Plus key has an id of numpad_plus. Then we could add the following to our SASS file:

In this case, the grid-row: auto / span 2 indicates that this key should start at its "normal row," e.g. we aren't changing which row it starts at, but that the key should span 2 rows. Basically, this key should span two rows (along with the gap between the rows). The height: 100% and justify-content: center is just for the aesthetics of the keys.

The keyboard takes up a fair amount of horizontal space, so I wanted to make sure it looked good on narrower screens. CSS Grid actually made this pretty easy to implement. I picked a few breakpoints and added a media query at each. At each break point, I chose a "scale factor," such as 0.8, and essentially scaled everything relative to the grid by that scale factor - making the keyboard about 80% of its original size. Without a whole lot of extra work, I was able to nicely "shrink" the keyboard for smaller screens.

This certainly isn't a comprehensive guide on CSS grid (I recommend CSS Tricks' article for that), but for me, this was an enlightening experience and opened my eyes to the beauty of the grid. I thought I'd share this experience with others.

I'm also aware that I barely tapped into the potential of the grid - which is pretty exciting, because that means I have plenty more to learn and experience with the grid!

Once suspended, gksander will not be able to comment or publish posts until their suspension is removed.

Once unsuspended, gksander will be able to comment and publish posts again.

Once unpublished, all posts by gksander will become hidden and only accessible to themselves.

If gksander is not suspended, they can still re-publish their posts from their dashboard.

Once unpublished, this post will become invisible to the public and only accessible to Grant Sander.

Thanks for keeping DEV Community 👩‍💻👨‍💻 safe. Here is what you can do to flag gksander:

Unflagging gksander will restore default visibility to their posts.