With Surface Neo and Surface Duo Microsoft enters a era of hybrid devices. Both new devices are targeted between mobile phones and tablets. Surface Neo is more on tablets side while Surface Duo is closer to mobile devices.

Save the date! If you are more than interested in new dual-screen experiences and want to see next big announcements when they are made then Microsoft 365 Developer Day on 11th of February is the event for you.

Instead of targeting as thin folding line between two screens as possible, Microsoft intentionally decided to have suprisingly wide line. It seems unexpected and irrational at first but when we dig deeper it’s actually damn clever approach. Why? On real device a folding line between screens is wide and narrow at same time. It’s narrow enough to be not annoying for views extended over two screens and it’s wide enough to be a separation line between master-detail views where master part of view is opened on one and details part on second screen.

Dual nature in user experiences is something that makes Surface Neo and Surface Duo special. It also introduces new concepts in UI design and new UI patterns. Perhaps most challenging part of those new style UI-s is supporting one and two screen modes as users can decide on how many screens they want application to cover.

Hyper-V warning! I ran into different troubles with emulator when Hyper-V was running on my machine. Stopping Hyper-V services was not enough – I had to uninstall Hyper-V and also Windows 10 virtualization features to get Surface Duo emulator running.

As Surface Duo has foldable screen it needs specialized emulator where foldable or two-part screen is already considered at operating system level. Screenshot below shows Surface Duo emulator running with no applications open. 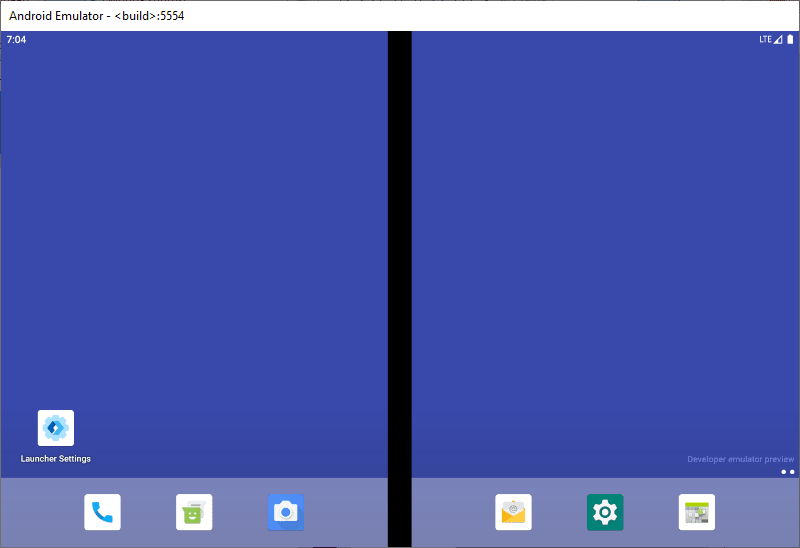 Before getting to code let me introduce new dual screen patterns for Surface Neo and Surface Duo. As with all new UI concepts there are at least some rules to follow to guarantee great user experience. Dual screens world is not the exception. 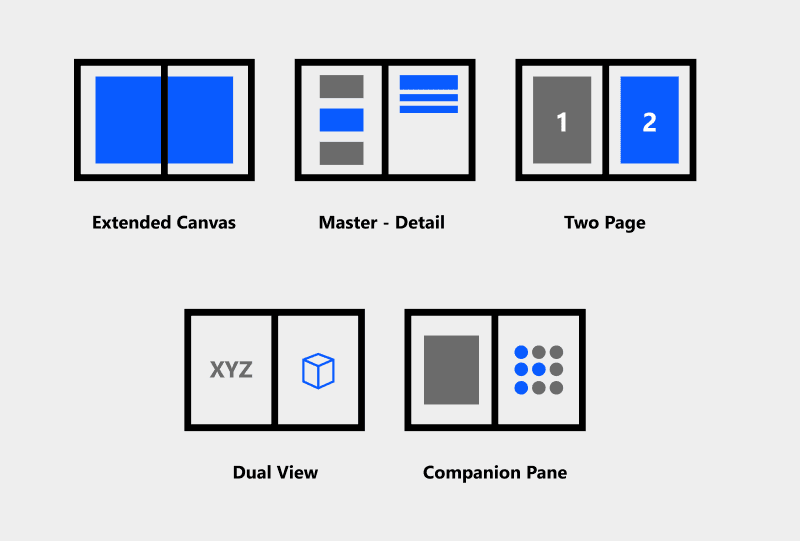 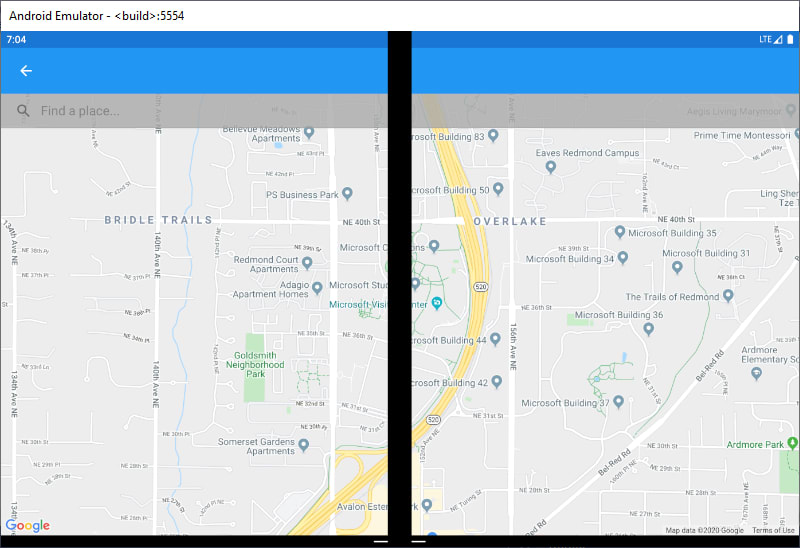 Use with map and drawing canvas apps.

Master-Detail – separating navigation or overview from details allows users to drill deeper into content while staying grounded regarding their position in the overall list/aggregate. 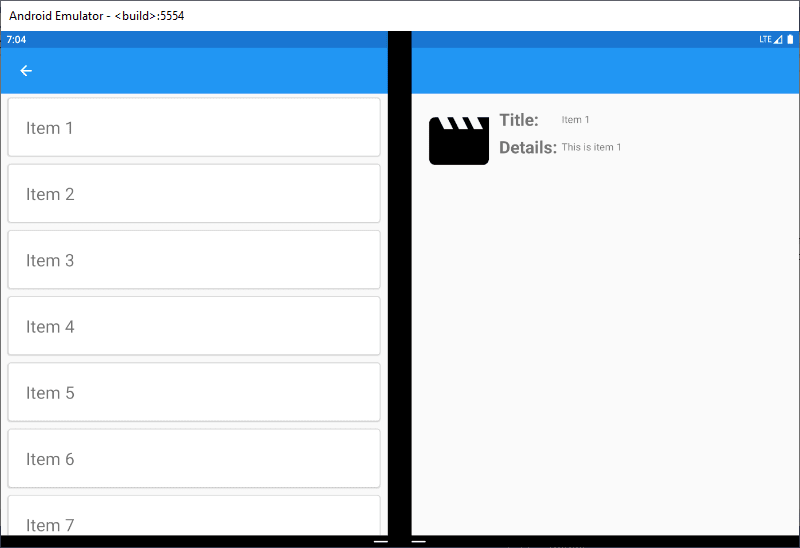 Use with apps that have lists or galleries, mail and scheduling apps, photos or image curation apps, music apps with playlists and song details, apps with strong navigation structure.

Two Page – leveraging the skeuomorphic metaphor of a book to showcase one page on each screen, so it’s more conducive to reading. 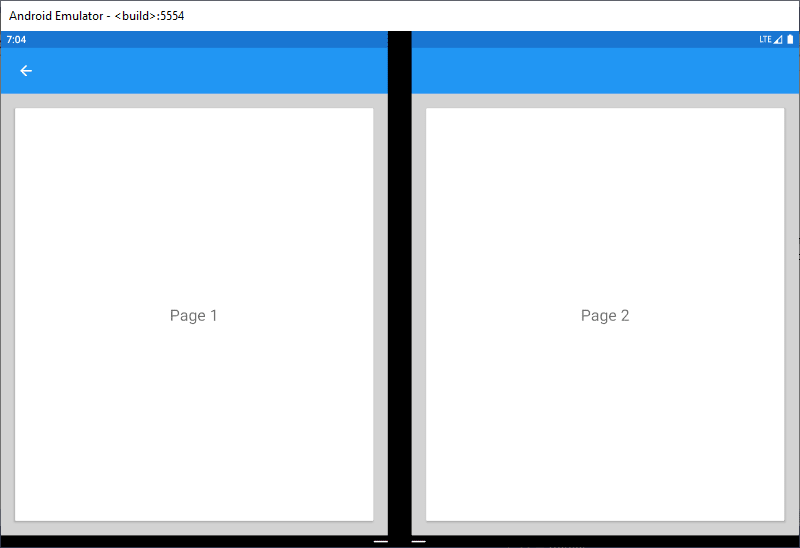 Use with document oriented apps, apps with content that is paginated, apps made for reading, apps with itemized canvas.

Dual View – having multiple views of the same app in the same container, allowing comparison of similar-type content side by side. 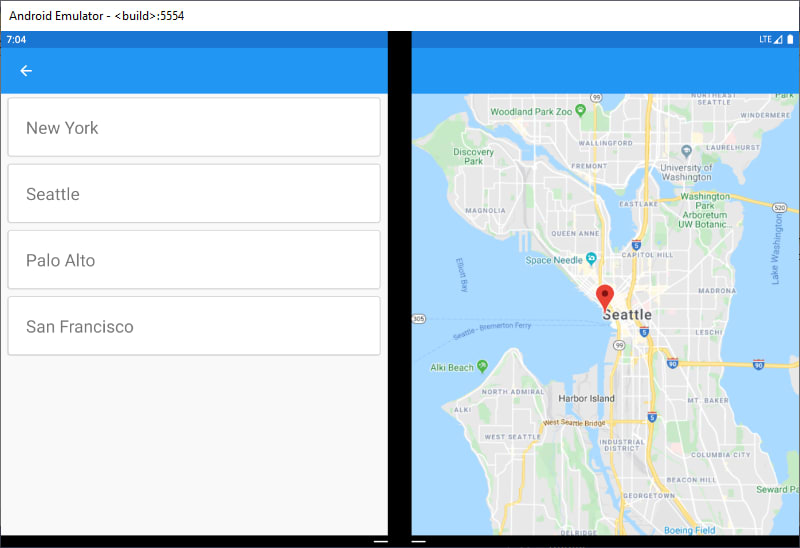 Use with editing tools that benefit from having before/after states side-by-side, content and context side-by-side, apps that let the user compare similar items, having two canvases with coordinated content but keeping each page separate. 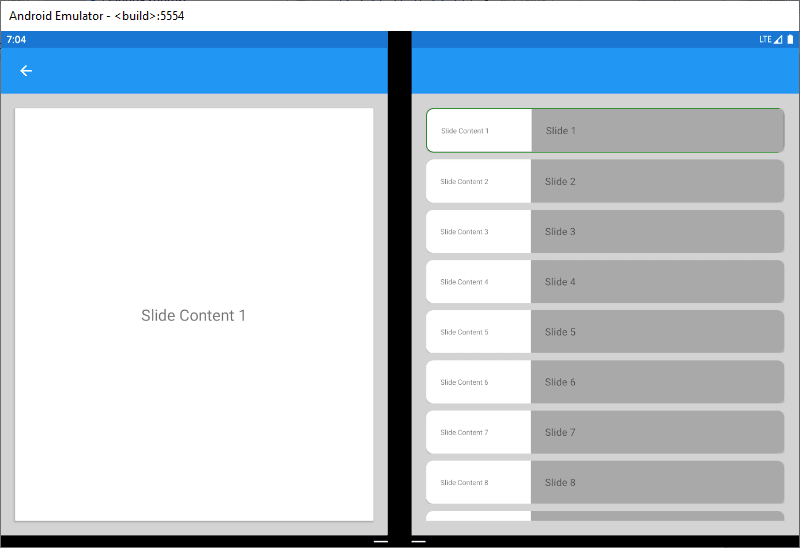 Use with productivity apps that have supplemental information that appears next to the main content, creative tools like image drawing app, music or video editor apps, gaming apps.

NB! Some sample forms need Google Maps key. You can acquire on from Google Developers Console. Maps key is needed in HTML files located in assets folders. Once you have a key, just copy and paste it where it is said in HTML.

Before starting application make sure emulator is running. For Visual Studio emulator is like a device it can connect to.

Although it doesn’t have much informative name, it still works and Microsoft will come up with better name for Surface Duo emulator in future. 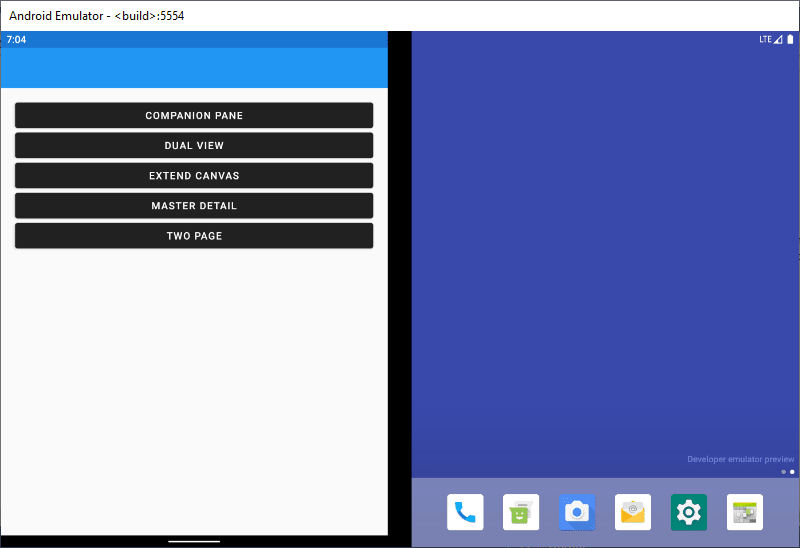 With these examples we have implementations of all dual-screen patterns available. 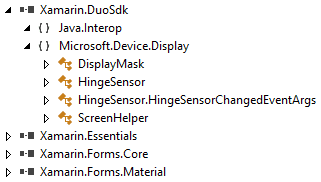 HingeSensor class is for monitoring hinge sensor. This class can tell us if device has a hinge and notify us when sensor value changed. ScreenHelper gives us information about hinge size and screen rotation. It has few helpful methods more that we can use to react to hinge sensor changes. 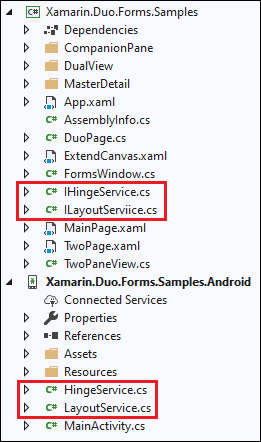 When sniffing around n Visual Studio project I found IHingeService and ILayoutService interfaces from “shared” Xamarin project. Their implementations – HingeService and LayoutService – are in Xamarin Android project. Both of these classes are so clean of sample application specifics that they should be part of some NuGet package in my opinion. There’s anyway Xamarin.DuoSdk NuGet package available.

Pages in sample application are all implemented in “shared” project. There are components like TwoPaneView and FormsWindow that are used in pages. Both components are generic enough to have them as NuGet package.

It was a little surprising for me that there are no base pages or ready-made templates for new dual-screen pages implementing corresponding patterns mentioned above. It’s possible that we will get something when preview version of Surface Neo is released.

Surface Duo preview SDK and emulator are first real tools for developers to get started with dual-screen apps development. Although emulator doesn’t look as slick as real device, it works well enough. As a developers we can really start experimenting now and extend our new applications to Surface Neo as soon as tooling for Surface Neo is available. Documentation that is available now is not complete yet, but still there’s enough information to get an idea how things work for dual-screen experiences.

Java Developers, What's in Your Toolkit?

Setup a splash-screen on Xamarin.Forms

How to create custom forms with validation and scroll to invalid logic in React Native (Part three: Improvements)

Gunnar Peipman
Developer, blogger, speaker, trainer, Microsoft MVP on ASP.NET
What's your dream job?
#discuss #career
Are you proud of your personal website? How would you like to improve it?
#discuss #personal #webdesign #website
The Future of "View Page Source"
#webdev #career #culture