The recently release Arduino nano 33 IOT is the latest in a line of impressive open source microcontrollers from Arduino. The Biggest thing to impress me about this little device is the size of the thing eg 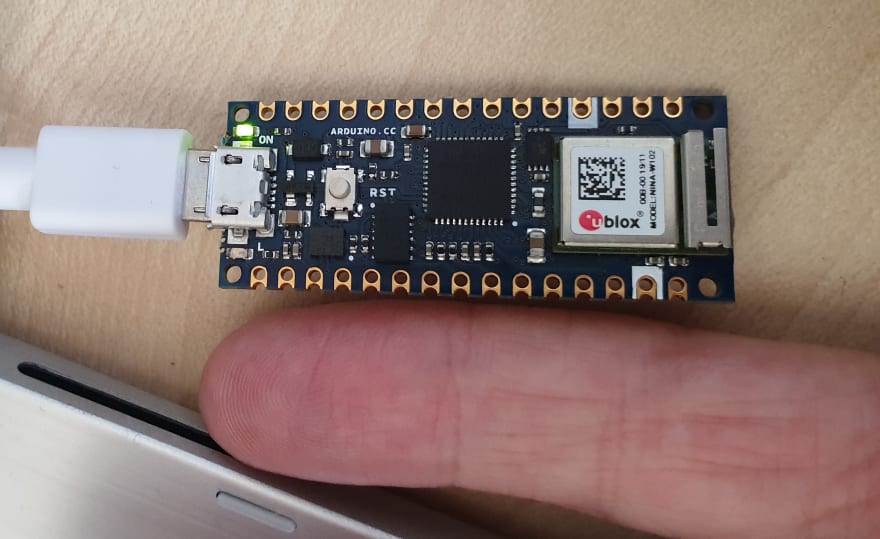 Smaller then your pinky finger but packed with wifi and bluetooth, and while these things are not a shadow in terms of computing power to the Nix powered single board computers like the Raspberry Pi or new Azure Sphere devices it is hard to beat these things for simplicity, expand-ability and cost. With the vast improvements in Serverless compute functions with thing like AWS lamba, Azure Functions and Google's Cloud Functions you can create some pretty cool solutions with minimal client side code. In this article however I'm going to look at how you can create code that runs entirely locally so doesn't need the Compute side (and cost and complexity associated with this).

Getting your device up and running

A word on Security

One of the big advantages of going with a Server or Server-less compute approach vs the method I'm using here is there that you get away from needing to have credentials (essentially in plain text) stored on the device which could be easily dis-assembled from the device itself. So always be a little careful to create an account specific to the task your doing.

The Arduino IDE has a pretty rich ecosystem of libraries that make the coding a little less onerous. The ones I'm using in the Graph projects are

Once you have an Access Token to access any of the Graph functions is just a matter of doing a REST GET,POST or PATCH (depending on what your trying to do) and sending the Token along eg the following shows a simple REST Get to retrieve Graph Profile which will contain things like phone numbers, and displayname etc

I've created 3 examples in the following Git hub repo https://github.com/gscales/MS-Graph-Arduino/ for getting the Microsoft Graph Profile for a user,
Sending and Email and creating a Calendar Appointment. All of these use the arduino_secrets https://create.arduino.cc/projecthub/Arduino_Genuino/store-your-sensitive-data-safely-when-sharing-a-sketch-e7d0f0 to store private info for the Wifi username and password, office365 credentials and clientId for the application.

Example 1 Getting the User Profile

Glen Scales
Developer specializing in Office 365
What's your favorite go to framework/library for developing web apps?
#webdev #discuss #javascript
🧐 Which Terminal Emulator are you using?
#bash #terminal #shell #productivity
How to program better (or This is what is wrong with your code)
#career #beginners #codenewbie #codequality